Motorola has been pretty transparent about the update process to Ice Cream Sandwich, keeping users in the loop regarding when updates for newer devices should be available. In that light, It just posted an updated to its Upgrade News page with a whole slew of new information, including which devices should see ICS before the end of Q2: 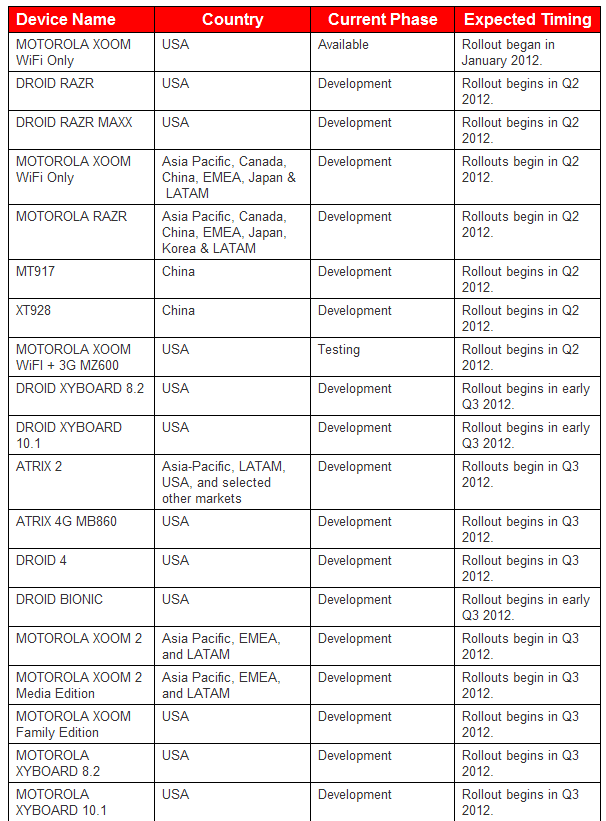 Considering it's the only one in the "testing" phase, I wouldn't be surprised if we see the Verizon XOOM get its update first, with the Droid RAZR/MAXX twins following after that. It also looks like Moto has a handful of other devices slated for a Q2 release (which ends in a month and a half), including the international RAZR and XOOM WiFi, as well as the Chinese MT917 and XT928 handsets.

Set for an "early Q3" release are all the XYBOARD variants (U.S. and international), as well as the Atrix 2, Atrix 4G, Droid 4, Droid Bionic, and XOOM 2 tablets.

Of course, this is a tentative schedule, so let's keep our fingers crossed that Motorola actually sticks with it.

VLC For Android Gets Unofficial Hourly Alpha Builds, Courtesy Of A Generous Developer