Update: The ICS update should be rolling out to the Amaze 4G now. Head to the Settings -> About menu to check for it.

Earlier this month, T-Mobile updated the support documents for the Sensation 4G to let users know that the ICS update would be available "very soon." Now, we have an exact date for that very soon: May 16th.

Beginning May 16, an optional update will be available for the Sensation 4G to update to the latest operating system, Android 4.0 (Ice Cream Sandwich). You can choose to download the update to Android 4.0.3 by following the software update steps.

The update will bring Android 4.0.3 and Sense 3.6 to the handset, along with a handful of other fixes and enhancements: 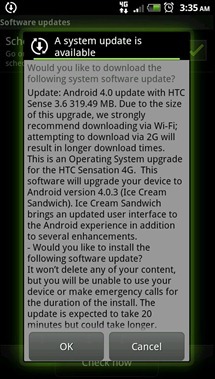 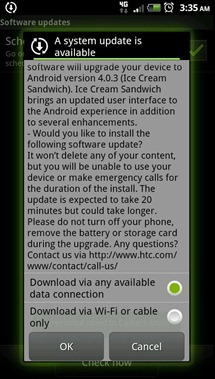 Thanks for the screenshots, Sagnik

Not only that, but the ICS update appears to be almost ready for the Amaze 4G, as T-Mo also published an update to its support docs stating that the update will be rolling out "in the coming weeks" along with and identical changelog. According to the version number, it actually looks like this update should be the same build that leaked last month, so you can give that a flash if you want the update before T-Mo wants to give it to you.

It looks like it's shaping up to be HTC's year - not only did it produce two of the hottest phones on the planet right now (One X/One S), but it's also the first manufacturer to start pushing ICS updates to devices on U.S. carriers (starting with the Vivid back in March). Good job, HTC!