It's a game I think almost anyone can play and love (and hate, but that comes with the territory), which is saying a lot for a click-and-explore puzzle title. Much as Portal made the idea of a first-person environmental puzzle shooter wildly popular, Machinarium has brought back from the grave the gameplay of popular titles like Myst - the single most frustrating series of games in the universe.

But where Myst's typically-1990's insanity level of difficulty made it a popular niche title among a few PC gamers and puzzle-solving masochists, Machinarium is a much more friendly, forgiving sort of experience. With the help of a compelling (some might even say "cute") story, truly beautiful visuals (this game is drawn, not "rendered"), and an original electronic score that rivals the Half Life 2 soundtrack, Machinarium is a game you can't help but become engrossed in.

But why? Before we delve into that question, let's go over a few more practical concerns.

If this game shows up as compatible with your phone, it's playing a cruel joke on you. Trying to solve Machinarium's puzzles (or pick up its often ridiculously-tiny objects) on a phone screen, even with something the size of a Galaxy Note, would be almost impossible beyond the first few, simple tasks. I had trouble clicking on things on my 10.1" tablet at times for a lack of size, so a 5.3" phone would presumably cause twice the level of frustration with that problem.

Because Machinarium was originally designed to be played with a mouse on PCs, strike zones for actions and objects are extremely small. Annoyingly so, at times. I suggest using a Bluetooth Android-compatible mouse if you have one, or the trackpad if you have a Transformer with a keyboard dock.

I played through the whole game using only touch, so it's definitely possible, but there were times I wanted a mouse - badly. As far as stability is concerned, the game never crashed. Switching apps did cause it to reset every time, though, so save often, lest you lose your precious progress.

Beyond these minor issues, Machinarium played perfectly on my Transformer Prime (there was one time when a particular sound file wouldn't play back, but it worked upon reentering the affected zone). So, let's get onto the game itself.

Machinarium wants you to solve its riddles. It wants to make you laugh. It wants you take a moment and just gaze at the beautiful land and soundscapes its creators have sculpted. It's more than a game - it's an experience.

You don't have to be into puzzle or hidden object games (I'm certainly not) to like it. You don't even have to like video games in the first place, if I'm honest. Just look at this screenshot: 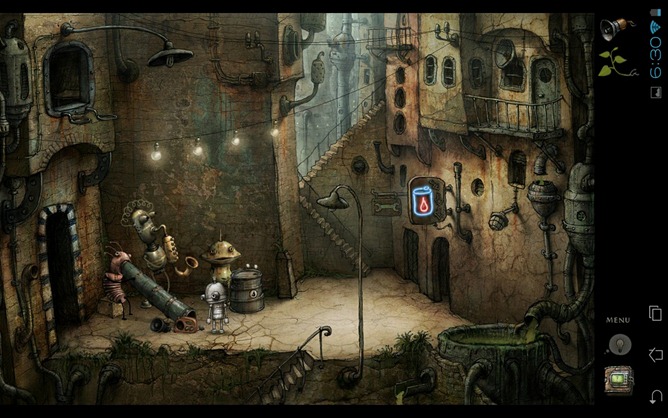 Aren't you already curious? Is that a robot street band, next to a robot tavern? Why is there a loudspeaker and an uprooted piece of shrubbery in my inventory? It's all so random and out of context. And that's what makes Machinarium so interesting - it constantly has you guessing exactly what is going on.

The story is simple, but vague enough (in the beginning) to keep you going. You want to know where the game is headed, and for a while, you're just not sure. You're a disassembled robot trying to get into a gated metropolis, and it's not clear why. I'm not going to go into the story any more, because it's half of the fun of the game. Just know that it will keep you engrossed, giggling, and curious throughout. 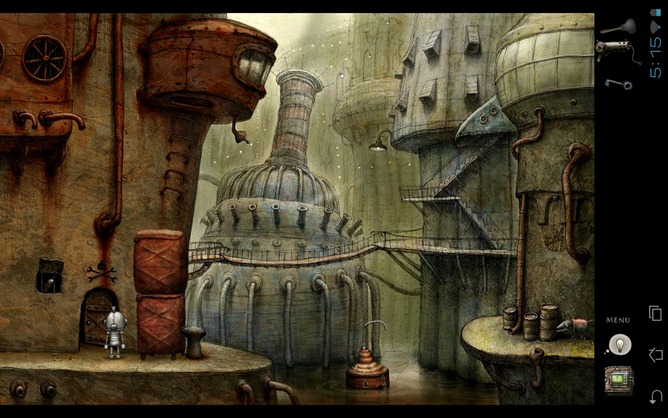 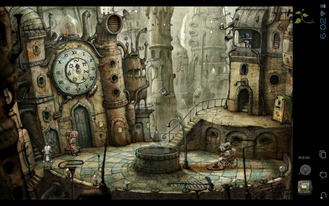 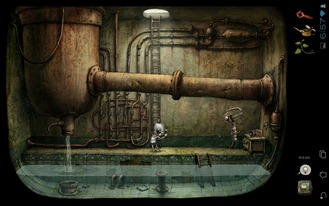 The artwork you're seeing above is also just undeniably beautiful. Someone took hours of care to build every frame of this little world, and it shows. It's such a fantastical and dreamy place - like something out of a Tim Burton film. The music is just icing on the cake.

But let's get down to gameplay - why is Machinarium more than just some pretty artwork and electronic music cued to a point-and-click puzzle game? When I said Machinarium wants you to solve its puzzles, I wasn't kidding - you can actually finish the game in a day with relative ease if you're persistent. This can be done by utilizing the little "help" tome on the bottom right of the screen. 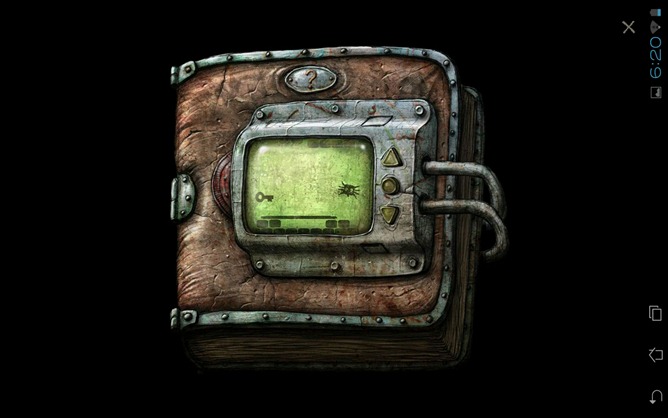 Each time you open the book, you're forced to participate in a Game & Watch-style mini-game that eats up roughly 30 seconds of your time and attention. At the end, you're rewarded with a "map" of how to solve all the puzzles in a particular scene of the game. Intensely detailed diagrams will show you exactly what to do, and in what order. Some would say this is like "cheating." I'd call it mercy. If you choose to forego the "hint book" for the entirety of the game, I imagine it would take you weeks to beat Machinarium. Some of the puzzles are incredibly unobvious.

Then again, I'm not a puzzle/hidden-object guru, so maybe for the Myst-faithful, this is child's play. Anyway, each time you're given a "map" to solve the puzzles in an area, once you close it, you have to play the mini-game to see it again. This forces you to remember as much as possible of the diagrams, and discourages you from abusing the privilege too heavily. If you're lazy, you could always screenshot them and upload them through DropSnap or something similar, but I'm going to assume you're all good sports.

This is what makes the game so accessible, though - without the hint book, I'd have given up on Machinarium in 30 minutes. I'm not terribly patient with puzzles, nor are most people. But using the hint book doesn't "ruin" the game - you still have that sense of curiosity and pleasure each time you advance further in the story. It's really quite rewarding.

Toshiba Excite 10 Review: Don't Let The Name Fool You, It's Just Another Tablet