This is the sort of quasi-rumor (it's fairly detailed and comes from the Wall Street Journal, so we're inclined to trust it) that makes me happy to be an Android fan.

According to the WSJ, Google is in cahoots with up to five device manufacturers to provide early access to the next iteration of the Android OS (Jelly Bean, we assume) so it can have an entire "portfolio" of Nexus devices ready by Thanksgiving - that's late November for those without turkey day. It will then sell said devices, phones and tablets, unlocked through (again, presumably) the Play Store, much as it has done with the unlocked GSM Galaxy Nexus.

Google is no stranger to the business of trying to sell phones directly to consumers. It did so with the original Nexus One, and the outcome was basically a total flop. With the arrival of the Nexus S, and later the Galaxy Nexus, it seemed like El Goog had thrown in the towel on the direct consumer handset sales business. Then the whole $400 Galaxy Nexus thing happened, and suddenly, speculation started running wild about Google's plans to pursue the model yet again. Today, it seems like a lot of that armchair theorizing was actually a little too conservative, and in the best way possible.

Let's have a little history lesson on the events leading up this landmark change of direction first, though.

It has been no secret that Google has quietly (and not so quietly) lamented the situation regarding control of software updates on phones (and mobile data-enabled tablets) running its operating system in the US. The situation is that it sucks. And you can credit the absurd testing and QA practices of American carriers for that. Seriously, it is all their fault - and no single one is exempt from sharing that crown of shame.

So, last year Google talked up this thing at I/O 2011 nicknamed the Android Alliance, promising timely updates through mutual agreements with device manufacturers. This was basically a promise to push through the red tape of carrier quality assurance and testing as quickly as possible to assure consumers phones would get updated as quickly as was feasible. It never happened, and the project was never referred to again - a relative rarity for Google.

Clearly, something happened (or never happened, I suppose) to that plan. Carriers haven't changed their absurd QA and testing procedures (see: the growing list of US phones that don't have ICS but whose international variants do and have for months), and it seems they really have no desire to change anything. Here are a few phones rotting in Gingerbread hell while their overseas brethren are all up in that cool, sweet, Ice Cream Sandwich goodness:

I've probably missed a few. And then there are all the American market-only devices with no international equivalents (I'm looking at you, Verizon) that suffer even more because manufacturers are loathe to develop major updates for single-market, single-carrier phones. And it's not hard to understand why - handsets like the Rhyme, Rezound, DROID Charge, Continuum, and others are basically at the mercy of easily distracted, cost-minded manufacturers, and carriers who give new meaning to the word "sloth." Just writing about it pisses me off.

The Android Alliance: From The Ashes?

This also, obviously, pisses off Google. The company sees hardware in the ecosystem that after six months of Ice Cream Sandwich being available has still yet to be updated. Many phones released in 2011 won't get Android 4.0 at all, which is just sad. Not because the hardware won't support it, and not because manufacturers are too busy with new phones, but because the American carrier system makes it such that the effort just isn't worth it. 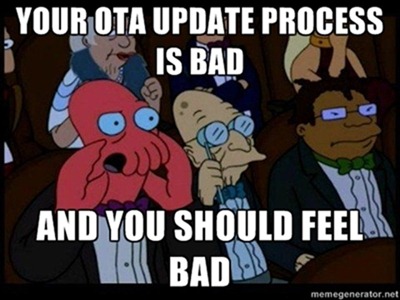 After the whole Google Wallet / Verizon debacle, I think Larry Page (and Google at large) has had his view of the wireless industry slightly... colored. In fact, Google's plans to "circumvent" carriers on Wallet seem to be materializing before our very eyes, thanks to this whole "Nexus portfolio" talk.

The Android update alliance failed, and I can see why - the carrier red tape mess isn't worth fighting. It's a broken, antiquated system that relies on the flawed notion that the carriers have some legitimate and justifiable role in the handset update process. They don't. But they'd certainly like you to think they do.

Apple avoided this fiasco from the start, by making all software updates go through its iTunes application, and basically telling the carriers to stay out of its way and trust it with the integrity of its own hardware's software. Android makes it easier for carriers to say there's a "third party" involved (Google), and that since the hardware manufacturers don't actually own Android, there's a need to "test" and "assure quality" of updates. It's bogus, it's stupid, and it is essentially tantamount to your ISP telling you it needs to approve Windows 8 before you upgrade in order to "protect" its network infrastructure.

So, the alliance really wasn't worth it in the first place. Why fight that uphill battle when you can sidestep it entirely? That's where today's Wall Street Journal report comes in.

If Google can do what it has done with the unlocked GSM Galaxy Nexus, it may very well have a winning model on its hands. That is to say, sell below MSRP, make it easy to understand what networks devices will work on, and sell the crap out of those amazing Google services and the "pure Google Experience" to novice users. The fact that Google can guarantee to buyers of these devices that they'll be among the very first to get Android OS updates (free of the messy carrier approval process) will bring in enthusiasts all on its own.

This is the "new" Android Alliance. One that doesn't care about carrier approval, contracts, or increasingly unsustainable handset subsidies. This is an Android Alliance that might actually change the mobile landscape in the United States on a deeper, economic level. I think we can all raise our glasses to that. Assuming it all pans out.

Cloud-Synced Note-Taking App Evernote Gets A Huge Update To v4.0 With New Look