Now, this may not happen to everyone - it's possible that a combination of events leads to this unacceptable behavior, or maybe it's having certain apps installed - I'm not sure. What I am sure of, however, is that I am not alone (the list goes on). About a week ago, I noticed this on my Epic 4G Touch (that's Sprint's version of the Galaxy S II): 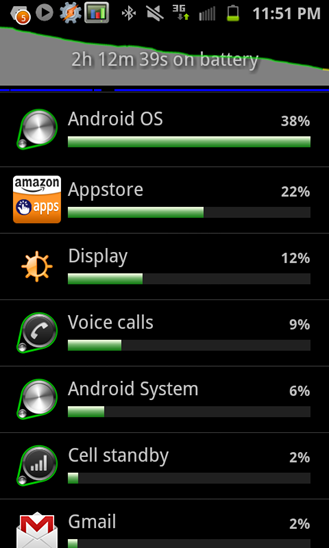 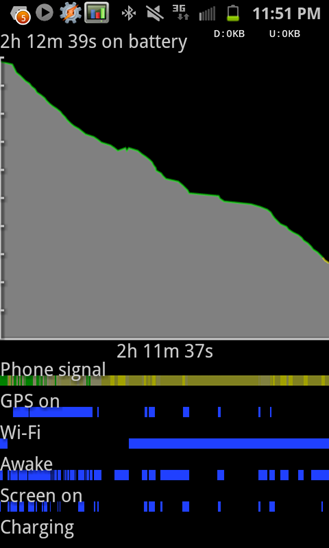 In the past few days, I've been checking my battery stats, and the Appstore app has been somewhere close to the top every time. The 2-hour battery life is completely unacceptable, and is likely due to several factors at play (poor reception being one of them - thanks, Sprint) - it's not usually this bad. The point here is that continuing to have a single, non-essential app that is responsible for 15-30% of my battery life makes little sense. Unfortunately, I don't have a screenshot showing it (this information shows up when you click Appstore in battery stats), but the Appstore was responsible for tens of minutes of CPU and awake time without ever being run manually - a number very high by all standards.

In addition to getting rid of this bloatware (that's the best word I can think of to describe it), I have re-evaluated all the applications I've installed thanks to Amazon's free app of the day program and purchased the ones I thought were truly worthy. This means less crap I don't actually use on my device and more money in those developers' pockets who really deserve it.

So, if you're using the Amazon Appstore, check your battery gauge and see if it's adversely affecting your battery. You may not even be realizing it. Do it every day for a week to see whether your device is affected.

At some point you have to ask yourself whether a few dollars saved are worth having to deal with a potential hit on the battery life, and to me, the choice was obvious. As they say, there's no such thing as a free lunch...

Update: To address your concerns about a busy notification area, I have SystemPanel and Tasker permanently taking up space there. The other one is PowerAMP as I was playing music at the time, while the rest that are collapsed are various notifications from Gmail and recent app installs I didn't clear - all things that are not that uncommon. As you can see from the battery stats, no other apps outside of Gmail are using the battery or anything close to what the Appstore is using.