The update for devices running Gingerbread to the latest Ice Cream Sandwich have been erratic at best. Although Samsung has promised updates for its smartphones and tablets, the overall rollout has been quite unpredictable with different markets getting upgrades before others.

There have been numerous indications that the Galaxy Note would be receiving an update to ICS at some point, however aside from the occasional leak there has been no official announcement. It looks like Samsung is finally starting to get their act together, as Devin Balentina reports that he has just received an ICS update notification for his Note. 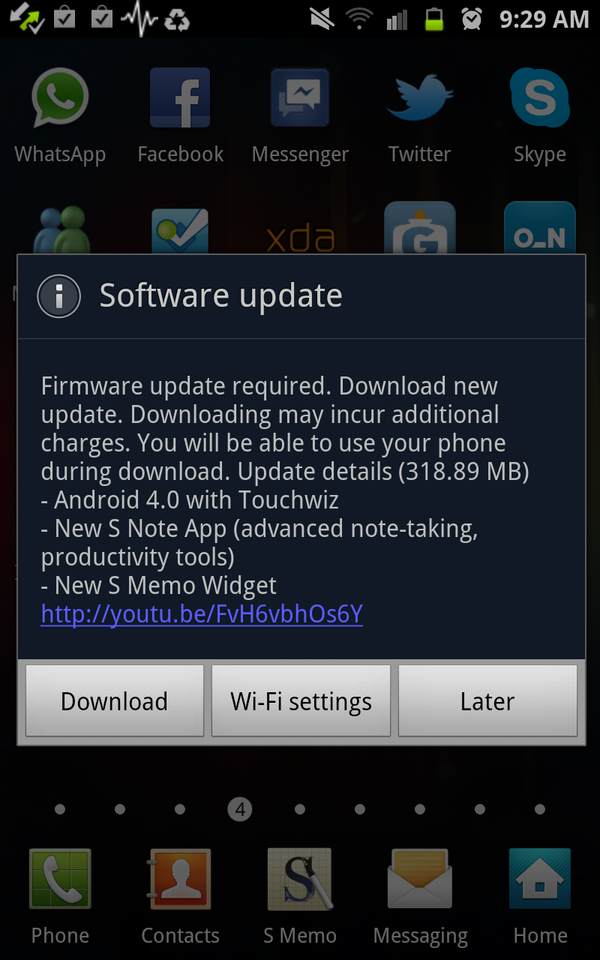 The notification indicates that the file is a massive 318.89 MB, with Android 4.0 (running Touchwiz) and updates to the S Note app and S Memo widget.

The YouTube link indicated in the notification is simply Samsung's ad for its "Premium Suite" of apps that comes with Ice Cream Sandwich. So, the 300 MB+ update will have all the apps in Samsung's Premium Suite, including S Note, S Memo, Shape Match, and My Story. I would have also hoped for an official version of Flipboard, but that can easily be obtained.

This update appears to be only for the GT-N7000 international version of the Note, though Samsung has not officially made any announcement about it. Customers with the AT&T version of the Note will have to wait a bit longer. Let's hope more "unannounced" rollouts start popping up around the world... I'm in Singapore with a Galaxy SII and am still waiting for ICS.

Closer Look And Hands-On With The Samsung Galaxy S III - The Most Interesting Phone Of The Year ...

Huawei Ascend Y100 Launching Exclusively On O2 In The UK For £80, Promises To Be Nice To Your ...