The Galaxy Tab 2 7.0 is, by most standards, the best Android tablet available for the price right now. That's what we thought when the tablet was available for $250. Today, though, on eBay's Daily Deals, the tablet is available for $219.99, or about $30 off. If you're in the market for a 7" tablet, the cost of an average night out at the movies is the difference between the Kindle Fire and this full Android 4.0 experience. 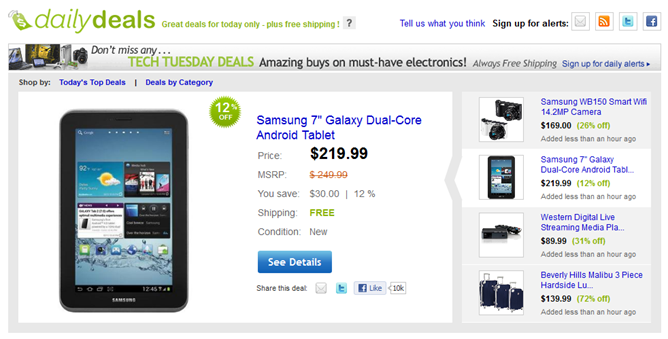 The deal is available for today only. This tablet was already a fantastic deal, though we're all eager to see what Google might announce at I/O. Rumors have been circulating that Google means to release a tablet, or at least sell a Nexus-branded slate, via its own store, much as its done with the Galaxy Nexus. Until we hear anything, though, the Tab 2 seven incher remains the best, cheapest Android tablet you can get right now, and at $220, it's an even better deal.