While Big Red may not be getting an HTC One series device just yet, the finally official Incredible 4G is actually very close. Announced yesterday just in time for CTIA, the Incredible 4G, along with most of its specs, was leaked by Android Police back in early April and briefly showed up two weeks later at DroidDoes.com. Yesterday, Verizon threw together a nice unofficial shindig for the press where we could finally check out the Incredible 4G in person. Read on for my impressions.

The Incredible 4G is basically One S' little brother - it's smaller (4" vs 4.3"), slightly clocked down (1.2GHz vs 1.5GHz Snapdragon S4 'Krait'), has smaller internal storage capacity (8GB vs 16GB), an S-LCD instead of a Super AMOLED screen, and contains only a subset of ImageSense called Video Pic (it lets you snap photos while taking a video, which we show off below).

However, the Incredible 4G didn't give up without a fight - it offers a replaceable battery, a microSD expansion slot, and LTE connectivity, all of which are absent on the One S.

The phone is a little on the thick side - Verizon definitely didn't put it on a carb-free diet before the big unveiling. Having said that, it felt great in my hand, and considering smaller phones around the 4" mark have been a rarity lately, I'm sure it will find its target audience quite easily. The red-accent well-defined and easily-pressable power button is truly a breath of fresh air for me, especially after phones with absolutely atrocious power buttons, like the HTC Thunderbolt. Not everyone is a fan of how much it's sticking out, but I am definitely onboard.

All in all, the Incredible 4G is a great addition to Verizon's family of LTE devices. Unfortunately, the Verizon reps present at the event were mum on the release date and pricing, no matter how many drinks we tried pouring down their throats. These guys are good.

Check out our Incredible 4G hands-on video and photos below. 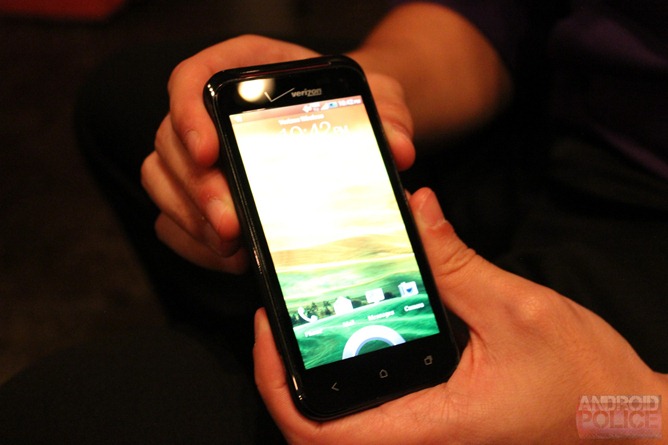