The Galaxy S III is... well... it's ugly. There's really no other way to put it. But why? Why is it ugly? I don't mean aesthetically, why is it ugly, I mean, "How did something like this ever make it out of Samsung's design studio?" I'll tell you how, it was never in the design studio. This phone design was born down the hall, in a room where the door sign reads "Samsung Legal."

It was designed by lawyers.

I can tell just from the press shots, this thing is a Samsung lawyer's dream. I'm sure you must be thinking,"Hmm, that's a weird assumption to make." but don't worry, an explanation is forthcoming. We're going to take a trip, way, way back to the prehistoric times of April 18, 2011: The day Apple claimed ownership of the rectangle.

Remember this? It's Apple's trade dress lawsuit against Samsung. For those that don't remember, or just weren't paying attention: "Trade Dress" is a legal thing, a form of intellectual property, basically a trademark for how a product looks, as opposed to a logo or word. Like a trademark offers protection to the use of a word or the look of a logo, trade dress offers protection on design. Trade dress lets Apple say to Samsung "Your product looks too much like our product; prepare to be sued into oblivion!"

Back in April 2011, Apple's trade dress infringement claims against Samsung went like this:

That is basically a list of things you aren't allowed to do. Now, individually, those traits aren't worthy of a lawsuit. It's the combination of those things that will send Apple Legal over to kick down your door. The combination of those attributes got the Galaxy S and SII in legal hot water, so for the S III, Samsung made this list their "Hey, don't do this" design guidelines. That's right, the entire phone design revolves around not pissing off Apple.

Why should Samsung care about what Apple thinks? Well for one, there's the aforementioned legal goon squad, and for two, Apple is one of Samsung's biggest customers. Not for phones - walking around Apple campus with a Galaxy phone sounds like a good way to get fired - Apple is one of Samsung's biggest customers for components. Samsung makes all sorts of phone and tablet components: CPUs, RAM, flash memory, displays, and more, and they want Apple to buy them - and they do. The iPhone 4, for example, owes about 25% of its component cost to Samsung. Apple sells a lot of phones, so that's a lot of cash in Samsung's pocket. The iPhone/Galaxy battle is a win/win for Samsung, and they would like to keep it that way.

Which brings us back to the The Phone Designed By Lawyers. Maybe you aren't a believer yet. Well, it's time for some evidence. Let's run down the list of trade dress grievances, shall we? 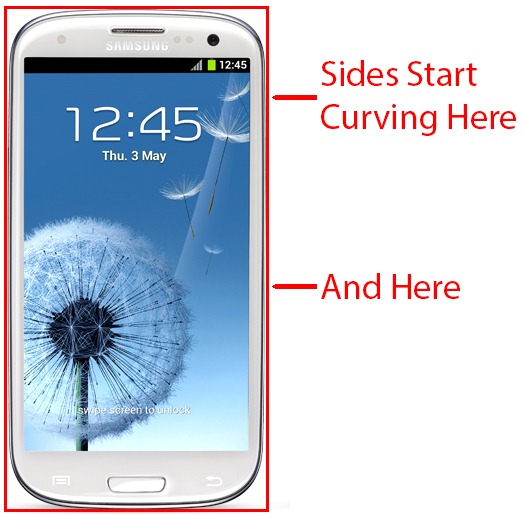 Geometry 101: A rectangle is a plane figure with four straight sides and four right angles. I've placed the GSIII inside a rectangle, so you can see how much of a rectangle it is not. Corners are addressed in the next section, so we'll ignore those for now, we're mainly concerned with the sides.

A rectangle needs to have parallel sides; the GSIII sides aren't straight at all. The outmost part is about 1/3rd of the way down, with serious curves leading to the top and bottom. So it's very much not a rectangle, or a rounded rectangle, or even horizontally symmetrical. It's more of an amorphous blob.

...with all four corners uniformly rounded;

Nope. The top and bottom corners are not the same shape. Observe the outlines of the top-left and bottom-left corners. Note how they are different. 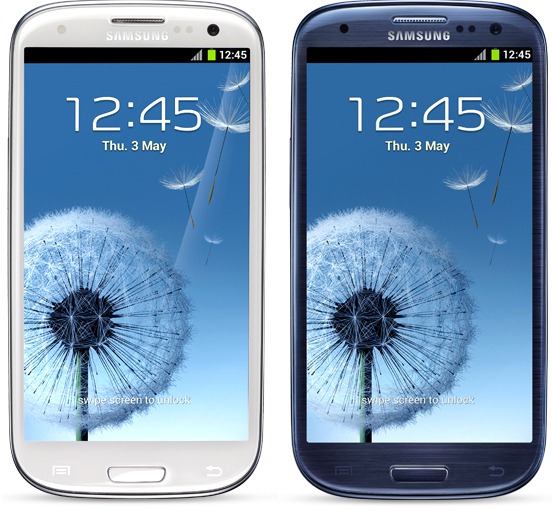 Having a giant screen on the front is kind of unavoidable. The only colors available though, are white and dark blue. Neither of those colors are black. The lawyers can sleep easy. 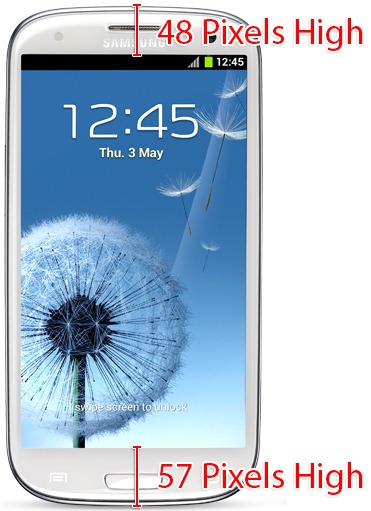 Apple's use of "roughly" is really obnoxious, but just in case they get into minutia (lawyers love minutia!), the top and bottom borders are not the same size. These to-scale measurements show the top bezel is about 16% smaller than the bottom. Also, they're not black!

a metallic surround framing the perimeter of the top surface;

You've got me there. The GSIII has a metallic band around the edge. I guess they just couldn't resist. Like I said earlier, it's not any one item that will get Samsung in trouble, it's the combination of them. A chrome band shouldn't cause too much trouble.

The Galaxy S (left) put colorful, square backgrounds around all of its icons. They stopped with the SII, and that carried over to the SIII.

a bottom row of square icons (the "Springboard") set off from the other icons and that do not change as the other pages of the user interface are viewed. 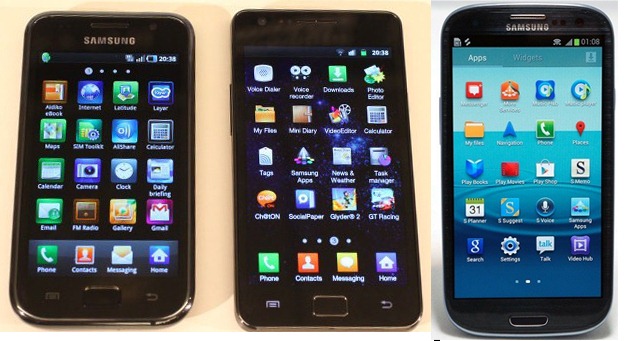 So there you have it. A darn-near perfect explanation of the GSIII design. Sure, it's butt ugly, but it's also 100% (well maybe 90%) lawyer approved.  An amorphous, unsymmetrical blob that doesn't come in black, with a non-permanent dock and non-square icons. There's no way Apple can add this design to their Samsung lawsuit.

So Samsung, was it worth it? Your product won't sell as well, but you won't piss off one of your biggest component customers either. I understand the motivation, but I still feel like you've sold your soul.

When Apple started patent trolling, they basically admitted they weren't going to win in an open market, and they decided to drag Samsung down with them. The crazy thing is, Samsung is letting them. They've ceded ownership of the rectangle and other common sense design traits to Apple, and did everything they could to bow down to their largest customer.

The result? A phone designed by lawyers. What a scary precedent.

CLIQ 2 Finally Receives An Update To Android 2.3 (Gingerbread), Makes Us Nostalgic For Waiting ...