After months of rumors and teasers, we finally got the chance to see the Samsung Galaxy S III first hand last night, at the company's Unpacked 2012 event in Earl's Court, London. Following many (many) free drinks and canapés, Suzi Perry - who hosted the popular Gadget Show here in the UK - took to the stage to kick off proceedings and introduce JK Shin, President of Samsung's mobile division, who officially introduced the new Galaxy to us.

By now, I'm sure you're all familiar with the specs of Samsung's new iPhone crusher, but just in case you need a little refresher, here's what you can expect when it ships to Europe in May…

First impressions were mixed when we first saw the Galaxy S III; the phone is modeled off the shape of a pebble (nature was a big theme at the event last night, with Samsung donating $100 to the WWF for everyone in attendance), with rounded corners and just two capacitive buttons at either side of the physical home button. Rather than imitate the appearance of the Galaxy S II, the design team has clearly taken away aspects of the Galaxy Nexus and incorporated them into this new device.

Like the Galaxy Note, the Galaxy S III will ship with a HD Super AMOLED 720p display, although the screen is a little bit smaller at 4.8 inches, so everything looks really sharp thanks to the increased pixel density. Despite all of the strong mood lighting in the exhibition room, we had no problems with glare, so it should be able to cope with outdoor usage without a problem.

The phone feels great in your hand, weighing just 133g with a depth of 8.6mm - much thinner than the iPhone 4S - despite the large display and impressive specs. Under the hood, you'll find 1GB of RAM and a quad-core processor to keep all of your multitasking applications running smooth, and on the back of the phone is an 8MP rear camera which looks great, despite the disappointment of many people that a 12MP sensor wasn't included. When I got the chance to play around with the phone, I was able to take the back cover off it, so it looks like the battery is indeed removable.

In the past, I've preferred to use HTC Android phones as they tend to feel better in my hand, but the plastic that Samsung has used on the Galaxy S III, which is available in either a deep blue color or white, felt very comfortable. The light weight of the device definitely played a part in this, but there's no denying that Samsung has constructed a phone which is easy to hold and doesn't feel like it's going to fall out of your hand.

You will be able to purchase the Galaxy S III with either 16 or 32GB of built in storage at launch, with a 64GB model appearing a little later. All of these models can also be equipped with a microSD card, so if you do happen to run out of space or just want some extra storage to keep all of your files in check, then you can purchase some additional storage to put in the phone. 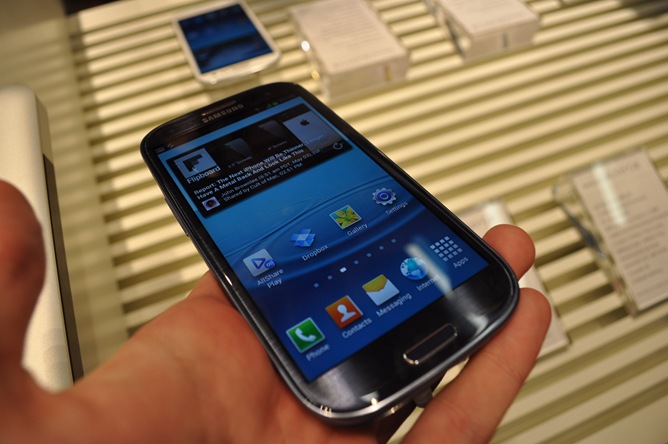 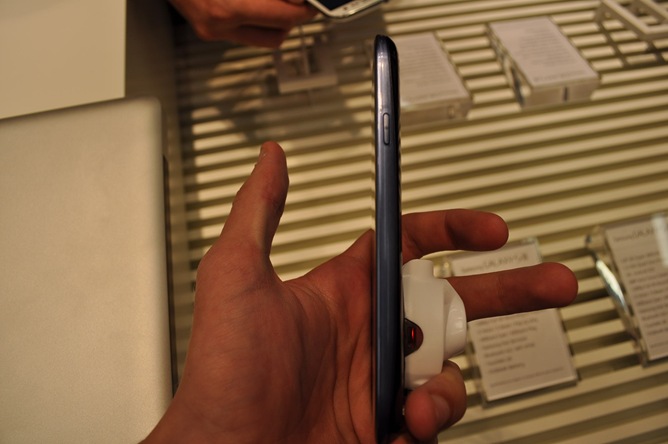 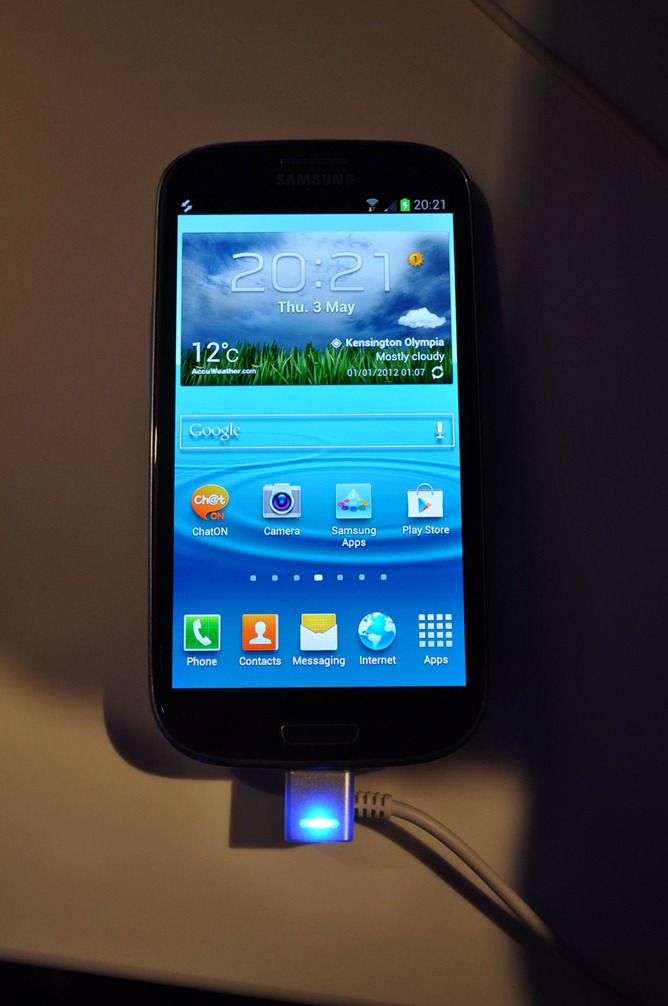 If you still have a few quid to spare after you've bought the Galaxy S III, you can probably blow it all on the vast array of accessories that will be available on launch.

One of the more interesting options is a wireless charging dock, which Samsung claims is a first, but it looks awfully similar to the Touchstone that was available for Palm's Pré phones. After dealing with tangled and lost wires for years, the wireless charging kit is definitely at the top of my accessories list, and as long as the unit is efficient enough to charge your phone at a similar speed to mains power, I'm sure it will be a big seller.

Also available to complement your new Galaxy S III will be a flip cover, desktop dock and HDMI adaptor.

In order to differentiate itself from the competition, Samsung has included a number of unique features in the Galaxy S III that you won't find in other Android 4.0 devices.

One feature that was demonstrated on stage at the exhibition was Samsung's new voice recognition software, S Voice. Created to compete with Siri, S Voice can play an integral role in your phone, in fact the demonstrator was able to wake the phone up and tell it that he wanted to take a picture, and the phone took him straight to the camera app.

We tried S Voice out with a demo unit after the keynote, but results were mediocre at best due to the background noise in the exhibition room. Users who are new to Android may become confused by the voice recognition in the Galaxy S III, as it has to be used in a separate app to Google's own voice recognition software that ships with Android.

The other major software addition that has been included in the Galaxy S III is 'AllShare', which allows you to share whatever is on your screen with other smartphone users or wirelessly transmit to a TV using a dongle. This was demonstrated in the exhibition room with a large Samsung TV, with photos, movies and even slideshows being sent from the phone.

Samsung has worked with Polaris Office to make presentation sharing really useful for enterprise users. If you're giving a presentation and sharing it from your phone, you can show entire slides on the big screen whilst using your phone as a remote and slide note viewer. You can also use your phone to draw on the slides and highlight certain areas for your viewers. 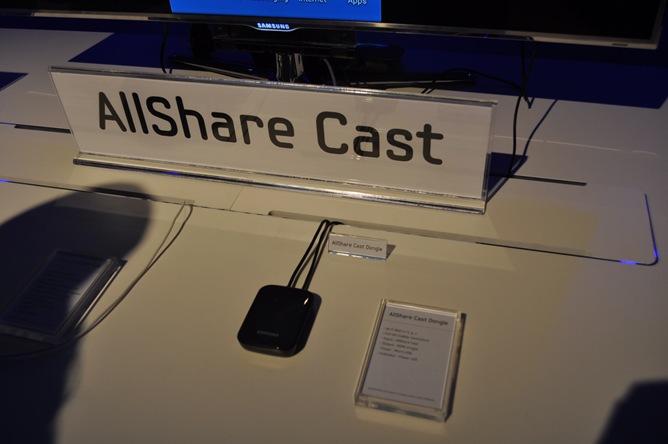 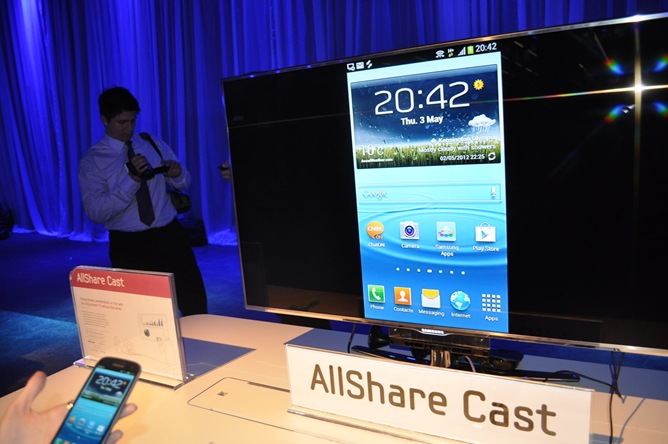 In the time that I was able to spend with the Galaxy S III, I was impressed by both the hardware and software on offer. I tend to go for phones with smaller screens as they are more comfortable for me to hold and use, but despite the 4.8-inch display on the new Galaxy, I could get around without any issues. The thin profile of the device will also be an advantage when you want to slide it into your pocket.

With a combination of great hardware and some unique software features, I'm left with little doubt that the Galaxy S III will be just as successful as its predecessor. If you live in Europe, you will be able to get your hands on it by the end of May, while those in North America will have to wait until "summer" to get yours.