For whatever reason, 3D technology is on the rise. Some TV's, smartphones, and even portable game systems are now shipping with some sort of 3D technology baked-in. For those who want a taste of what 3D is all about without having to shell out more cash on a new device, though, comes an interesting new game: Crash Course 3D.

CC3D is a modern take on the arcade-style shooters of yesteryear, with a couple of interesting twists. First off, the game offers a unique 3D-mode that supports anaglyph 3D glasses (red/cyan or green/magenta), so users can get a taste of what blowing things up is like with an added dimension. If you're not into 3D, though, don't stress - you can also play the game in good ol' 2D. 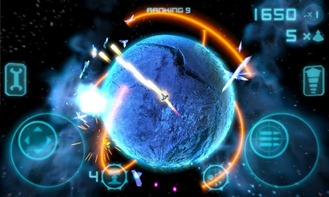 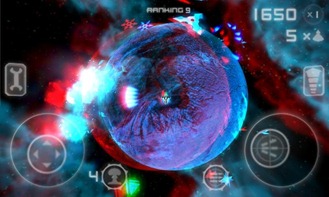 Like other arcade shooters, this game is played from a top-down view, but instead of killing your foes on a completely flat background, you race around a sphere to eliminate the alien scum. This adds a whole new element of gameplay compared to traditional alien shoot-em-ups, and makes the game all the more interesting.

Galaxy Player 3.6 Review: Well, It Runs Android, So I Guess There's That