After a good amount of digging and some pointed swear words aimed in the Wayback Machine’s direction, I’ve compiled a complete history of the last two years of Android updates.

This isn't just the old Google charts poorly stitched together in Photoshop (that was version one), this is a seriously accurate piece of chart-work made from the actual data used to make the official history graphs. With a little Google Chart API data-extraction magic, you can get numbers accurate to 1 tenth of a percentage point in 15 day increments. In other words, we're going for "crazy accurate."

Ok, enough exposition, I present to you the definitive history of the last two years of Android updates, which shall henceforth be known as "The Big Android Chart":

Neat huh? Towards the bottom you’ll notice pixel-accurate tick marks for SDK releases and AOSP drops. Two years of data is the oldest you're going to get short of an official Android history section (please?).

The biggest thing that sticks out as me is just how poorly Android tablets have been doing. The Xoom came out February 24, 2011, right around the time of the 3.0 SDK release, and Honeycomb flat lined for the next 7 months. It didn’t even register a pixel on the chart until the holiday season of that year.

One strange aberration I can’t quite figure out: What the heck happened at the top of the graph from 5/01/11 to 11/15/11? There’s a gap that isn't claimed by any version number. The official Google charts look the same way, so don't blame the chart. How did this happen? Poorly identified custom ROMs? Google ICS testing? I have no idea. Any commenters want to take a swing at an explanation? 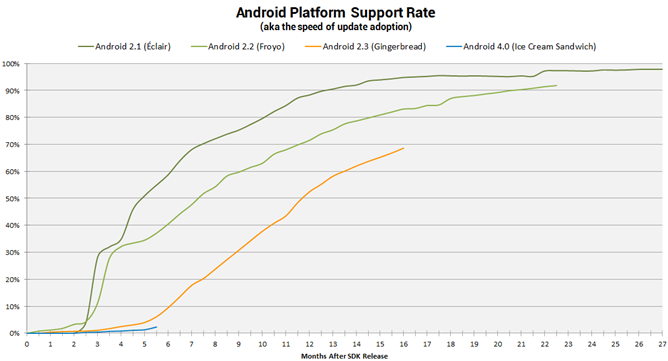 Our more astute readers will have noticed that Honeycomb is missing from this one. This chart is meant to be a measurement of upgrade ubiquity, and most devices (phones) are not eligible for a Honeycomb upgrade, so it doesn’t belong here. It’s also important to realize this is chart is about “Platform Support,” not “Version Adoption.” Version adoption would be that individual version only, platform support is a combination of that version and all versions after it. So Éclair being at 97.8% doesn’t mean almost all phones run Éclair, it means almost all phones run Éclair or greater. An install of Froyo also counts for Éclair.

So there you have it, Android history data that isn't available anywhere else. It's been a long road, hasn't it? I'll be keeping the massive spreadsheet generated from this and updating it every few months or so. Here's hoping that ICS line takes a huge upswing by the time that next update rolls around.

There's a ton of data to take in, I'd love to hear your observations in the comments.