Perhaps more importantly, the price marks this as a successor to the 101 - and shows that the 300 slots below the 201. At just $400 for the larger 32GB model, the TF300 makes it clear that ASUS is trying to hit every corner of the market (and they're doing a damn fine job, at that). For the same price as the 16GB TF101, you get twice the storage and twice the cores. 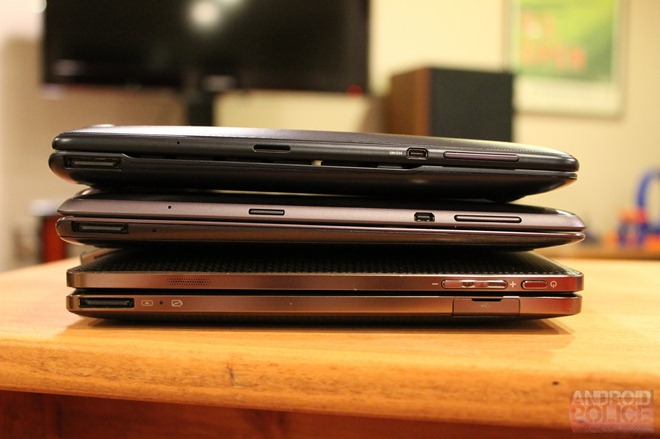 That's not to say the 300 is the perfect budget tablet, though. While it does offer a lot of the same hardware and excellent user experience as the Prime in a cheaper package, it makes some concessions to get there. Read on to hear what the 300 does right, what it gets wrong, and where its more expensive brother is better. 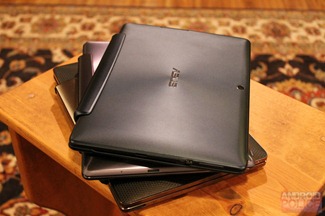 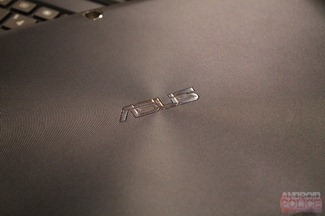 I suppose I'd be remiss in not pointing out a few other issues. The 300 will be offered in 3 colors - blue, red, and white - but the red and white won't be available until June. Also, supplies may be fairly constricted at launch, which is certainly an issue for some people. While these are noteworthy concerns, I don't think it's fair to consider them in a review of the hardware - after all, not being able to buy the tablet in white doesn't mean the user experience is any different. 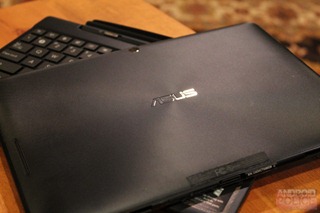 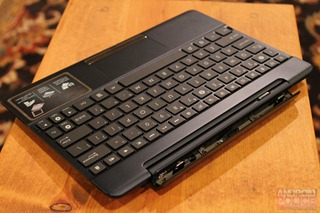 In a sentence: truth be told, the TF300 just might be the best choice for somebody looking to buy an Android tablet on a budget right now. The Prime offers an equally excellent experience, but the slimmer package may not be worth the price premium for many people.

You should buy it if: you're in the market for an Android tablet, but don't want to fork over premium dollars.

The original Transformer (which I'm singling out because it was also plastic) felt of quality, but that was partially thanks to the fact that its dimensions and weight made it feel like a brick. The TF300 feels good if a little budgety, with little panel gap and just a bit of give. Still, that bit of give (particularly in the back panel) and an overall plasticky feeling make me question the dropability of the 300, though it feels like it could certainly still take its fair share of bumps and bangs while riding in a road warrior's bag. All told, it's not especially noteworthy in either direction. And despite being plastic, I don't mind the feel (perhaps because I'm accustomed to it by now), so much that I even prefer the feel of the 300 to the (always cold) aluminum-clad Prime. 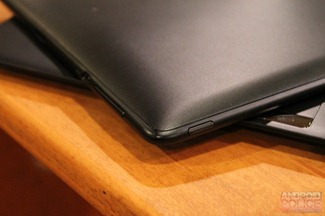 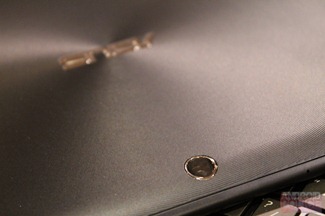 As with the 201 (and as mentioned above), the speaker is once again placed in the most illogical place imaginable: the back. While it does put out respectable sound, you have to cup your hand behind it to really hear it well, something that's not comfortable for more than a few minutes at a time - and something you shouldn't have to do in the first place. That said, it puts out good quality and a ton of volume. 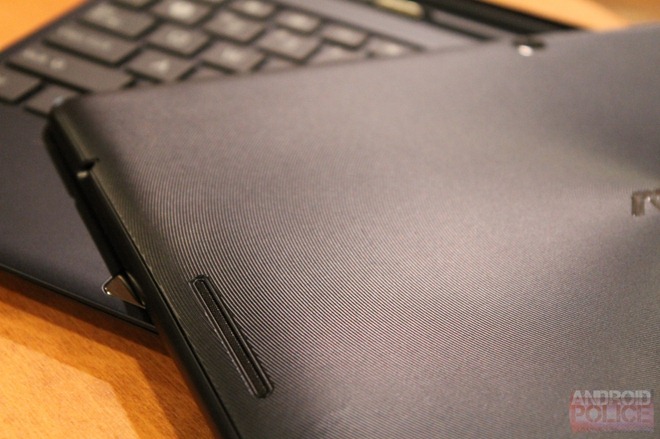 The TF300 is virtually identical to the TF201, with the exception of the upgraded RAM (DDR3 in the 300, DDR2 in the 201) and slightly slower clock speeds in Performance mode. Accordingly, you'd expect pretty similar performance, and you'd be right. The TF300T drove exactly like the more expensive Prime, and since all-around performance is the most substantial metric when reviewing a device, that earns it high marks.

One thing that gives the 300 a leg up over the Prime: battery life. While I find the Prime's battery life to be more than adequate (I only charge it once every 4 or 5 days), the TF300T seems to go just a little longer - to the tune of roughly 9 hours of moderate use. But perhaps more importantly, leaving the 300 docked doesn't seem to drain battery life more than normal, unlike the Prime (my Prime, when docked, will go from 100% charge to totally dead in less than two days, without use). 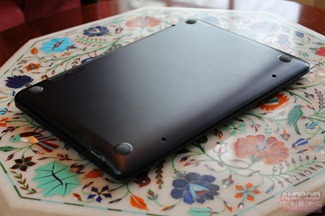 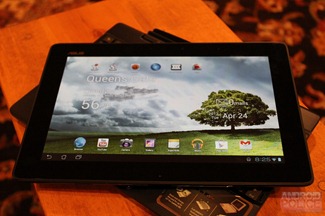 As with the Prime, the TF300 features three different performance modes. In Power Saving mode, if 1-2 cores are active, they'll clock as high as 1 GHz, 3 cores will hit 720MHz, or all 4 will top out at 600MHz. For Balanced mode, all four cores will max out at 1.2GHz, and for Performance mode, 1 core will go up to 1.3GHz while using 2+ cores will bring things back down to 1.2GHz. Personally, I left things in Performance, though I'd imagine the difference between Performance and Balanced is probably virtually nil.

Finally, it's worth noting that I experienced 4-5 force closes during my 5 days with the TF300T. While that's not a lot by any stretch, it's more than I'm accustomed to with other Android devices, so it's worth including in the spirit of full disclosure. Surprisingly, Maps accounted for 3 of those force closes, though after the initial 3 I haven't had an issue. 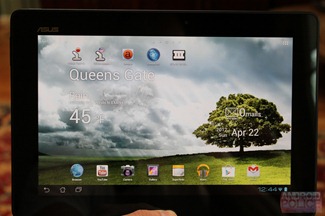 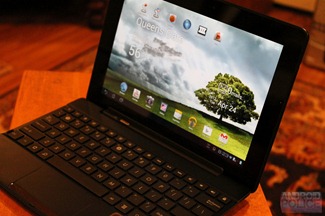 The display on the TF300 is more or less exactly what you'd expect on a $380 10" Android tablet.That is to say, it's not enough to stand out in either direction. While it's not as bright as the Prime's display (350 versus 600 nits), it's bright enough for most viewing situations. The viewing angles aren't noteworthy either - they're good, but nothing special. Colors and black levels once more place the display firmly in the middle of the pack.

Then again, being average isn't necessarily a bad thing. Screens have remained fairly standard in recent Android tablet history, and that's because they're generally tried-and-true. In a nutshell: it's a pretty standard display for a 10" tablet at the ~$400 price point. 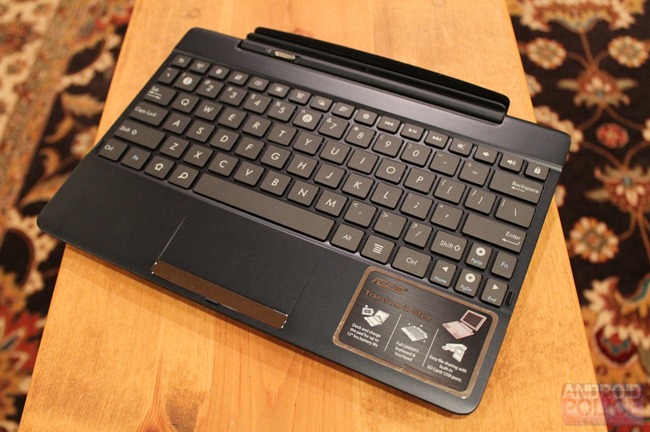 Unfortunately, the dock's build quality doesn't quite measure up. The keys feel good and clicky (but still quiet), and at first blush the build quality is good. Apparently that's a false impression, though - after just a few hours of use, the 'T' key went flat. It still works (in fact, I typed about half of this review using the TF300 while docked), but it's noticeable enough that it can throw off your vibe while typing. Much more importantly, it's enough to cause concern about the dock's long-term durability. 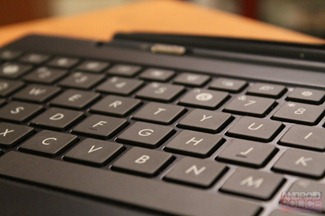 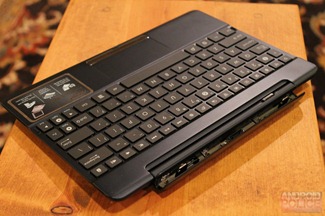 Around the outside, the dock offers an SD card slot and USB port, as well as the charging port. As mentioned above, the trackpad is more or less useless, because it's virtually impossible to use the keyboard without bumping the trackpad. The result is that you'll be typing an email, bump the trackpad without realizing, and suddenly you're typing 5 lines up - or in a different email. While that alone isn't enough to make the trackpad useless (in fact, I'd say that makes it hyperactively useful), the sole solution is to disable it while typing... which quickly evolves into just leaving it off all the time, since constantly toggling is annoying as all hell. 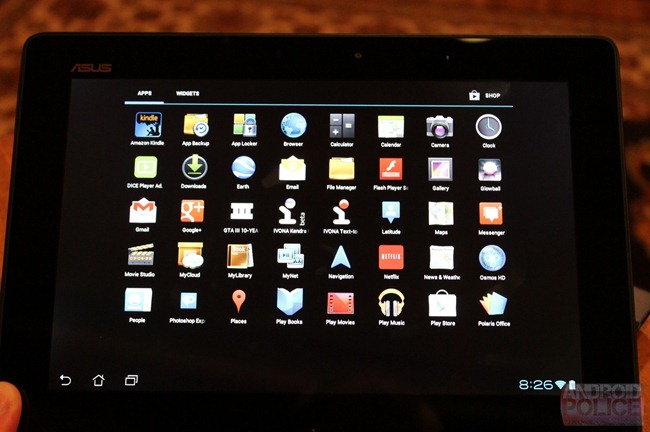 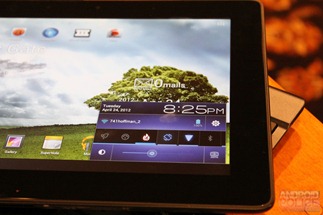 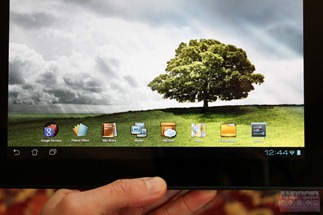 Anyone who's been following Android in even the most peripheral sense probably has a pretty good idea of what to expect with Ice Cream Sandwich, and anyone who read my Prime review should know exactly what to expect with ASUS's custom UI. And the bloatware remains the same, too: Polaris Office, SuperNote, App Backup, App Locker, Asus Sync, Asus Webstorage, MyCloud, MyLibrary, MyNet and Netflix. And, once again, they're all refreshingly useful in their own right. 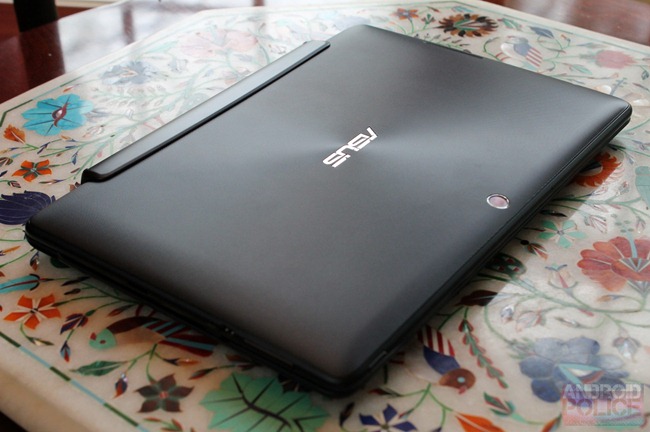 With a starting point of $380 and packing a quad-core Tegra 3 CPU, the TF300T offers a compelling package. It's a lot like a Corvette ZR1: blazing-fast, but swathed in plastic and made with a few compromises to keep it (relatively) cheap. Then again, that's probably an acceptable trade-off for most people - myself included.

Award-Winning Game Rigonauts Coming To Android In May, Bringing Fighting Machines With Some ...