Just yesterday, Google started selling the Galaxy Nexus on its Play store. The news caught many off guard - not only had Google not done anything of the sort for quite some time, but the price ($399) was surprisingly low for an unlocked, contract-free device. Unfortunately, however, there was a catch: namely, the gadget was still subject to all the usual taxes and shipping fees (at least in all the states we tested - CA, TX, KY, MN, and likely many others), bringing the total cost up by almost $50. Here's a screenshot:

But fear not - Expansys USA has come up with a solution. The company - who, mind you, has quite the reputation - has matched Google's price (well, technically it's $.99 higher at $399.99) and removed tax and shipping charges in all states save for only one - Illinois. Moreover, you'll be able to order the phone regardless of where you live - unlike Google Play, Expansys' Galaxy Nexus is available internationally. 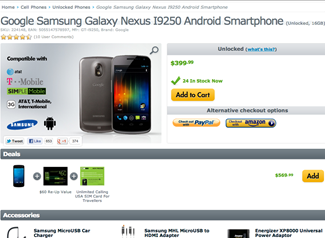 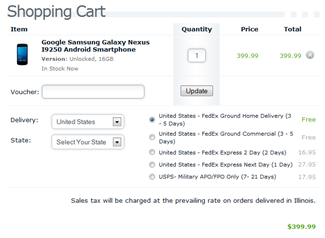 Finally, as you can see above, Expansys is currently holding a deal wherein you can order a Galaxy Nexus, a $60 "Simple Mobile Re-Up Value," and an unlimited calling USA SIM card in one neat bundle for $569.99.

Hit up the source link to get started.

Source: Expansys via 9 to 5

Samsung Announces 1.4GHz Exynos 4 Quad: A Quad-Core Processor Destined To Power The "Next ...