There has been a trend lately of apps being released that act more like traditional floating windows. LilyPad HD, OverSkeen, and AirTerm have all garnered a lot of interest, but they are single use apps. Floating Widget does just what its name suggests: it makes widgets float on top of your apps. The implementation is a little odd at first, but once you learn the rules, Floating Widget is useful in a number of situations.

The actual Floating Widget app isn't the most intuitive, and the instructions it offers at start-up are hard to follow until you actually dive in. The app has a few buttons, but there is little indication where to start. Where you should start, is with the Select Widget button. This will pull up a scrollable list of all the widgets on your device. Go ahead and select one to continue. The app won't do anything once you've selected your widget, but I soon realized you have to hit the Set Location button of your own volition.

The app will take you back to the home screen to place the widget, which will be highlighted with a red box. This is how you know it's in "move mode." When you release it, the red box will go away, leaving a smaller green bar at the top of the overlay. This is the move bar. Long-press in the green to go back to move mode. This is a handy way to get the widget out of your way without going back to the app itself. You can only have one floating widget at a time, though.

Whichever widget you've chosen will be fully functional - even scrollable widgets work. However, you won't be able to resize them. One bummer you will likely encounter early on; you can't leave you foreground widgets in the black bar at the bottom of Android tablets. This is the only part of the system UI that covers the widgets up.

Floating Widget will let you choose any of your installed widgets, even gigantic ones. Smartly, it shrinks things down a bit so you aren't losing as many pixels (although I'd like an option to keep it full size). This lets you use larger widgets if that's your only option, but some might not scale particularly well. I found that choosing a widget that is 1 or 2 units tall made things look better, and the resulting overlay could be nestled up at the top of the screen on a tablet.

With phones, the tradeoff is a little different. Even smaller widgets will cover a lot of the things you need to access. If you're browsing the web, but want to have a widget hovering on top of the browser, you're going to have to work around it more. 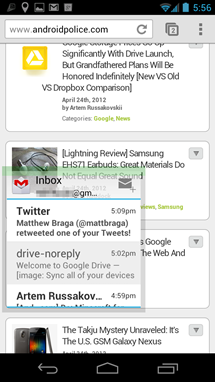 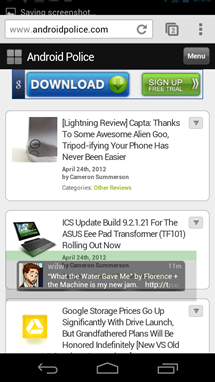 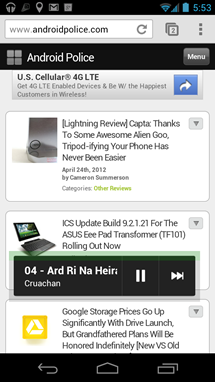 Floating Widgets works on Android 2.1 and higher, which means it brings some useful functionality to older devices. Placing music playback controls in a floating overlay is great for phones without notification playback buttons. A small clock could be helpful in games that hide the status bar as well. A small Gmail window is potentially useful of you get a lot of mail like I do. Compact Twitter widgets have also been beneficial in my testing.

I've been running the Reddit is Fun widget over top of my other apps, and I can happily report that it has decreased my productivity to previously unheard of levels. You can probably come up with wiser uses for Floating Widget.

The widgets you place are perfectly responsive; even the scrollable ones. What I have noticed is that Floating Widget seems to cause some noticeable system lag. Any long-time Android user is used to a little bit of hesitation at times, but this is more than that. When an overlay is active, moving through home screens is a slightly laggy, and scrolling in Chrome Beta seems more jerky.

I did this testing on two Ice Cream Sandwich devices, so it is possible that other OS versions won't have this problem, and the developer could issue a bug fix at some point. This issue hasn't been severe enough that I had to ditch Floating Widget, but it's something to consider.

Floating Widget is selling for $1.49 in the Play Store. I would say it's worth it if you have a use case in mind. Perhaps you need playback controls right there while using Google Navigation? Floating Widget is a very cool idea, and it's worth supporting the developer to see what this app can become.

[Lightning Review] Capta: Thanks To Some Awesome Alien Goo, Tripod-ifying Your Phone Has Never ...

Minecraft Pocket Edition Now Lives Up To Its Name, Finally Lets You Craft As Well As Mine