Google Drive is real, and it's out, and I've been playing with it. If you haven't heard, Drive is Google's cloud storage offering. You get 5 GB free with an option to buy more.

You're going to hear two phrases over and over again in this hands on, so you'd better get used to them now: get ready to see "like Dropbox" and "like Google Docs" a lot.

Google Docs, by the way?  Gone. It's dead. Totally replaced by Google Drive. The Android Docs app updates to Google Drive, the website has changed over too, and "Docs" is now replaced by "Drive" in the black navigation bar.

But on to happier things! We've got a whole new Google service to explore. The biggest component of which is the new desktop app:

The Desktop App - Your OS Is Useful Again

Just like Dropbox, Google Drive has a Windows (and Mac) app. It syncs your files in both directions, and lets you manage your files in the familiar Explorer interface. It is pretty much a straight up clone of Dropbox: 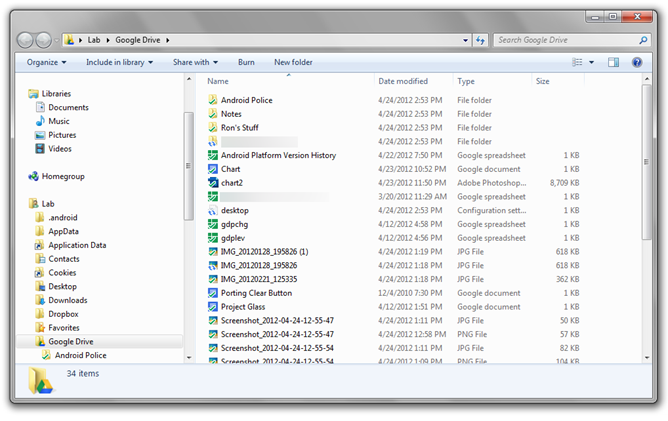 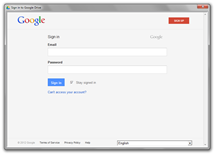 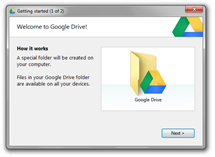 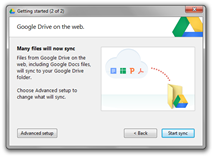 No surprises there. The app even downloads your Google Docs, which seems like a sacrilegious concept in the world of cloud computing. At the end of the sync process, you’ll have your Google Docs on your hard drive with cute little .gdoc and .gsheet extensions. Wild. Double clicking them opens the document in Google Docs, just like you would expect, and just like Dropbox, anything you drag into the Drive window gets synced to the cloud. 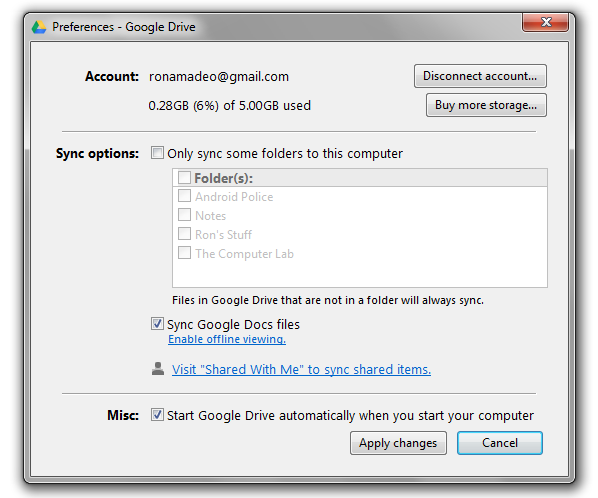 There really isn't much in the way of settings. You get the option to limit syncing to certain folders, sign out, and you can see your free space. It looks a lot like the Google Music app.

The coolest thing about the Windows app, which definitely sets it apart from Dropbox, is that it makes your OS useful again. Dropbox and Drive both store files, but Drive stores my important files, and that can really change the way you use your computer.

The advent of Google's cloud services has made me move more and more away from my OS to towards the browser. Instead of double-clicking on a Word document from my desktop or a folder, I open a Chrome tab, go to Google Docs, and open the file from there. Over the years, Google has been steadily taking over my workflow for each file type: mail, music, calendar, video, pictures, etc. Every start point has gone from "Do this in your OS" to "Open a browser." I can't tell you the last time I used my desktop for anything other than a dumping ground for "files I need to save real quick."

Drive lets you go back to all that native desktop stuff. It's really easy to add file shortcuts to your desktop now. You’ve always been able to “create application shortcuts” with Chrome, but that was such a long process no one ever used it for individual files. This is something a normal person can figure out and use.

And it's not just shortcuts, you can actually use your native file manager to manage files. It's so much easier than the regular Google Docs interface that after this article I'm going to take some time and clean up my Docs storage. It's just cool to be able to use your OS for OS stuff again, instead of it just being a browser launcher.

It's not all happiness and sunshine in desktop-land, though. The Google Drive desktop app is missing a few crucial features. The biggest being that shared folders are not (reliably) synced. It's such a big deal that, when writing this section, I was considering just throwing <h1> tags around that last sentence and calling it a day. Correction: Shared folders can sort-of be synced. There are even official Google instructions.  If you open load up the web app and drag your shared folder to "My Drive" the desktop app will download them. (Thanks Stephen!) The problem is, though, it just doesn't work. If you and a friend make changes you'll get some errors, and on the 3rd or 4th try, your files might sync. At the end of the day Drive doesn't have reliable, two-way sync for shared folders. It's a huge deal breaker and a big reason to still have Dropbox installed.

The other crushing revelation we've had today is the complete lack of shell integration. You can't right click on a file and do anything with it. Well, you can delete a file, or make a new folder, and Drive will sync that, but you can't share files from explorer, or make a new Docs file, or do anything outside of the most basic file manager commands. Drive needs to make its own special section in the right click menu like Dropbox does. I'm holding out hope for a quick "version 2."

It's also missing all the nice little touches Dropbox has. Someone needs to talk to them about their choice of bubble icon. There's no bubble popup for updated files, like there is for Dropbox. There's also no upload progress reporting of any kind. I was testing Drive with a 3 gig file and I had no idea what was going on. No completion percentage or upload speed, just "Syncing 1 of 1 (trust me)." Eventually I canceled it. I had no idea if it was canceled at 1% or 99%.

A big pet peeve of mine is the tray icon. Left clicking on it brings up the right click menu. Just let that sink in for a bit. It doesn't open your Drive folder. You have to pick "Open Google Drive Folder" for that. It also doesn't open the existing Drive window, like Dropbox does, it opens a new one. Always. My normal Drive/Dropbox workflow involves clicking that icon about a million times, and at the end of it Dropbox is fine, but Google Drive has spawned a million identical windows. Fix it.

Have you used Google Docs? Then you've used the web app: 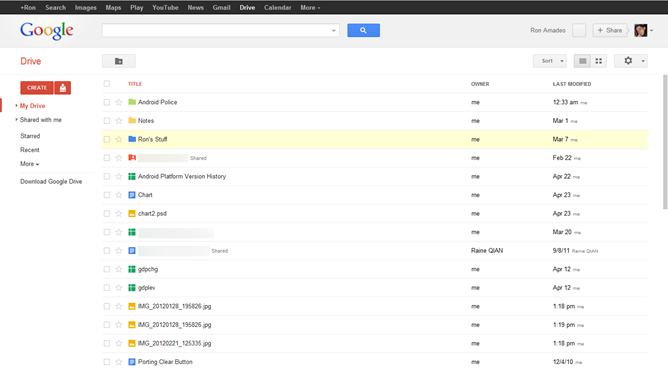 Well, scratch that.. It can display Photoshop document thumbnails. Teeny tiny ones. And if you try to zoom it just blows up the thumbnail into a pixelated mess. It's still better than nothing, though. 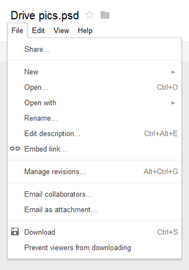 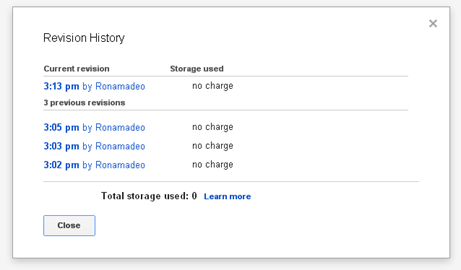 Drive keeps a revision history for everything, so saving stuff directly to the drive folder means you have a nice history if you screw something up. Clicking on the links will download your old file. They don't even count towards your storage limit!

Drive isn't just for your Google Docs. There's an SDK, which means developers can use your storage for their apps. There's even a spot in the Chrome web store. 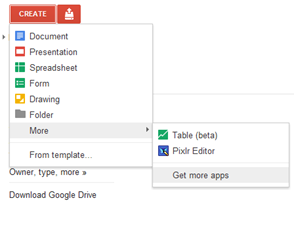 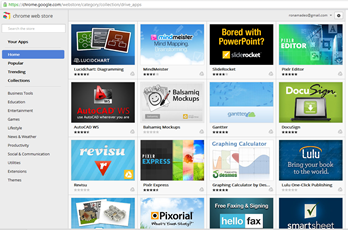 "Get more apps" is bizarrely hidden at the bottom of the "Create" menu. Once you actually find the menu item, things are easy. Apps plug right into Drive. You can set your new app as the default handler for certain file types, and you can create new files with your new app. It's like having a little cloud OS. You can't drag 3rd party apps out of the "More" ghetto, though. For now, they're stuck there.

This being an Android site, I should probably talk about the Android app. It looks like this: 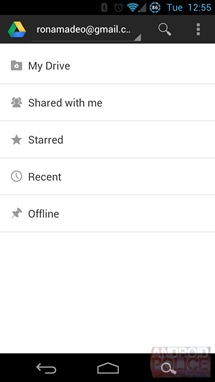 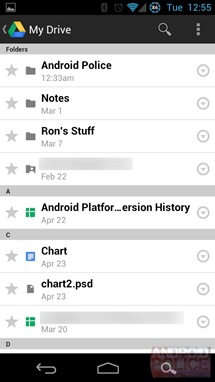 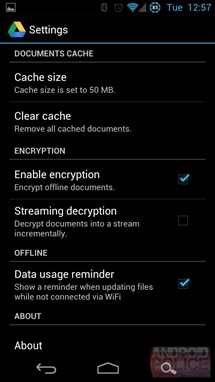 Like I said earlier, this app used to be Google Docs, and it still works a lot like it used to. In the first screen, the horrible 2x3 icon layout of the Google Docs app is gone, and everything has gotten a thorough de-saturating.

"My Drive" brings you to what was formerly known as "All Items" in Google Docs. It's pretty hard to write anything about it, because almost nothing has changed. 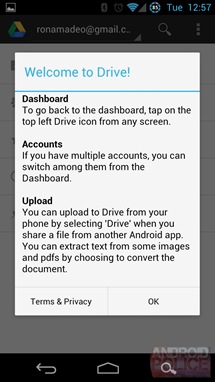 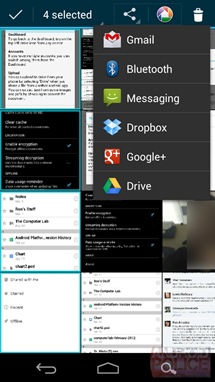 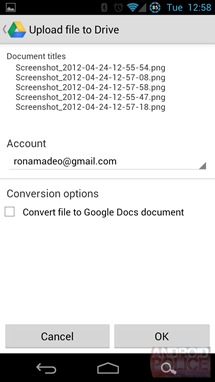 What has changed is the ability to upload anything to your Google Drive via Android's share menu. You can only upload to the main Drive folder though, the sub folders are off limits. So much for organization.

Fun fact: since G+ pictures are synced to the Gallery, you can actually "share" from your G+ pictures to your Google Drive. Yo dawg, I heard you like cloud storage. 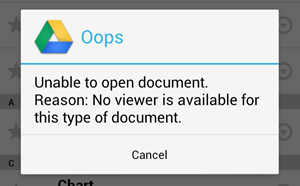 The Android app doesn't know all the tricks the web app does. Here it is choking on my .PSD file. Clicking on a file will let you open it in the appropriate app, though, so if I had some kind of magical, Android (Phone) compatible version of Photoshop, I could see this.

There is also this silly little widget. It lets you open Drive, open the starred list, take a picture and create a new document. Meh.

This is a decent first effort, but until Google gets synced sharing working reliably, I'm going to have to stick with Dropbox. The Desktop app isn't anywhere near as polished as Dropbox, there are lots of poor UI decisions and missing features. This also isn't really Google Drive, it's more like Docs Drive. It's missing my Google pictures, music, videos, attachments, and myriad other files I have stored across Google's services.

Drive definitely has some potential though, there's an SDK, 3rd party apps, a small glimmer of shared folder sync working in the future, and all the files you already have on Google Docs. To me that's the big killer for Dropbox, Dropbox can only ever store some of my important files, Drive, because of the Google Docs access, can store all of them. Dropbox should definitely be worried. Until they get the standard suite of features nailed down, though, Drive deserves a Beta tag.

Minecraft Pocket Edition Now Lives Up To Its Name, Finally Lets You Craft As Well As Mine

Galaxy Note For T-Mobile Spotted In The Wild, Probably Not Difficult Since It's Visible From Space