The day that many Sprint customers have been waiting for is finally here: the arrival of the Samsung Galaxy Nexus. That's not the only new device to hit The Now Network today, either - the LG Viper and LG Optimus Elite also join the ranks of new offerings on Sprint.

Although the Galaxy Nexus pre-order inventory sold out after only three days of availability, it looks like there are plenty to go around now. While the device is going for $200 with a two-year agreement on Sprint's site (and in-stores), Wirefly is currently offering it for $150 for both new and existing customers (with qualifying agreement, of course). 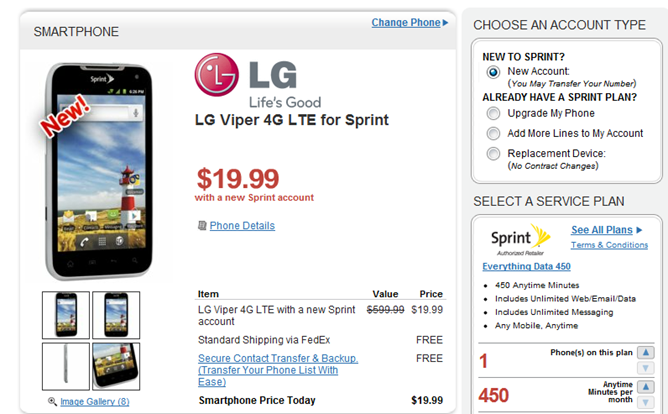 If you want to get in on Sprint's LTE network as soon as it's available, but aren't into paying $150-$200 for a new device, then the LG Viper is the way to go. At only $99 directly from Sprint the Viper is a steal, as its specs are akin to that of a much more expensive device:

If you're looking to save even more money, Wirefly is also offering the Viper at a lower price than Sprint: $20 for new accounts and $50 for existing customers.

Neither the Galaxy Nexus nor the Viper sound good to you? Looking for something more low-end (I can't imagine why that may be, but I guess it could happen)? If yes, then the Optimus Elite is the one for you. It's a super low-end device with specs that really shouldn't impress anyone:

At the current time, the Optimus Elite available exclusively through Sprint's site for $30 after a $50 mail-in-rebate, so you'll have to hit that up if you plan on grabbing this little guy.

[Weekend Poll] Do You Use Cloud Storage With Your Android?