When we first heard about a $250 7" Android tablet, it wasn't from Samsung, but ASUS. Since then, ASUS has grown suspiciously quiet on the subject of its cheap tablets (perhaps because of a change in plans?), but Samsung has taken up the mantle. The Galaxy Tab 2 7.0 boasts a middle-of-the-road spec list when compared to some of this year's other tablets, but still manages to be one of the sleekest tablets I've used.

Note: I errantly described the display as an AMOLED screen in the video above. It is actually a TFT display.

The seven incher is made of a sturdy plastic backing and feels very solid. While it's a tight fit, the tablet is easily pocketable, and very easy to hold. It actually feels a little lighter than the Kindle Fire. Inside, it's carrying a dual-core TI processor and 1GB of RAM underneath a 1024x600 TFT display. On paper it doesn't sound like much, but the display is actually surprisingly crisp and easy to read, even in sunlight. 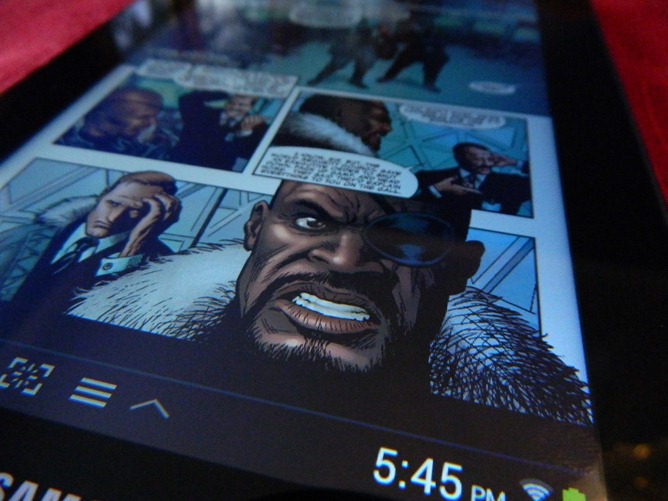 The device uses Samsung's proprietary connector for charging and data transfer, and includes 8GB of built-in storage, expandable via an SD card. The 3.2MP rear shooter, as well as the barely-video-chat-worthy front camera are only moderately useful, but this slate does have one stand out piece of hardware: an IR blaster. More on that in a bit. 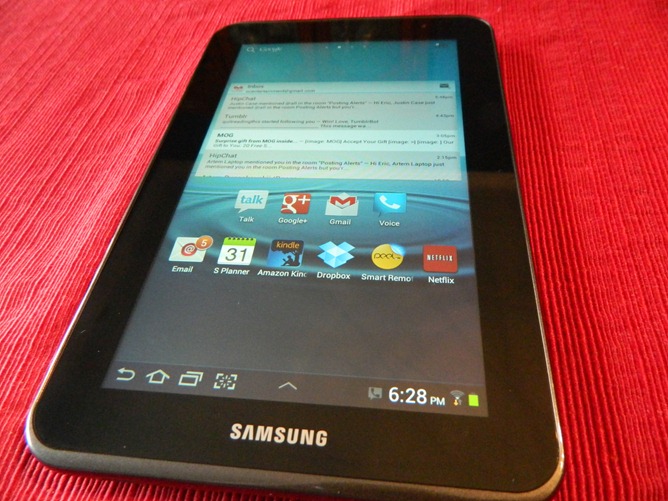 Android 4.0 makes another tablet-based appearance on this slate and, while we're happy it's here, it does raise some interesting questions about Android's tablet UI. While the right size for a tablet is largely subjective, Android's tablet UI is fundamentally designed to put more info on the screen than its phone counterpart. While it's not universally bad (several people I showed this device to loved its size), there is a certain sense of diminishing returns when the OS is working to add more info to the screen and the device is giving you less of it. 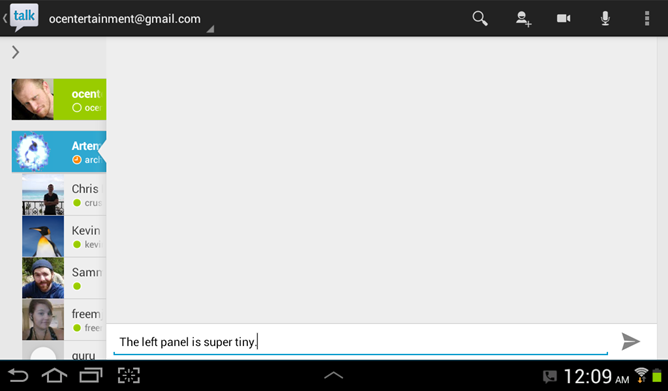 Part of the problem is very likely due to the comparatively low-res 1024x600 display. Certain UI elements seem to be bound to a certain width, not necessarily a certain percentage of the display. This results in some rather unbecoming layouts, as in Google Talk, shown above which gives about five characters worth of space to the left panel, but a huge percentage of the screen's space to the right side of the panel.

While it may be true that other 7" tablets will display Android's tablet UI more elegantly, it's still worth pointing out: Android simply does not scale down very well if you keep the tablet interface. Manufacturers might be better off using Android's phone UI for devices with too low of a resolution to scale properly.

That being said, the device is still buttery smooth. Since it's Android 4.0, all your apps that you know and love are here, including the Kindle and Nook apps. While the Kindle Fire and the Nook Color are the primary competitors for a tablet like this, it hurts the argument for either of them when you can get many of the same services on both. Except, on the Tab, you can also get everything else you'd expect from a full Android tablet for $50 more.

Speaking of things you get with this tablet, Samsung is also running a promo with Dropbox. Current or new users who sign in with the bundled Dropbox app on this tablet will get a bonus 48GB of storage, in addition to the 2GB that comes standard with an account, for a whopping 50GB of online storage. Unfortunately, unlike Dropbox's other space boosts, the extra 48GB will disappear after a year. Still, that's more space than you could fit in the microSD card slot, which is only expandable to 32GB.

Samsung has also added a few new features on top of the stock 4.0 experience. In general, we're not big fans of manufacturer skins, but this time around, it's a net positive. For starters, Samsung's floating apps make a comeback. In the center of the Status Bar, the Tab has a pop-up menu with shortcuts to a series of apps that float about the UI. Just like AirCalc and OverSkreen, these apps stay on top of whatever you're doing, allowing you to truly multitask. The calculator, in particular, is a most welcome addition, but Samsung also includes floating app versions of Alarm, Email, Music Player, S Planner, Task Manager, and World Clock. 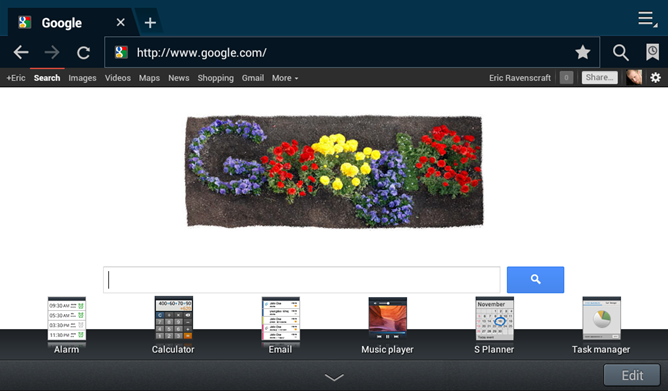 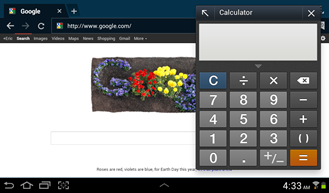 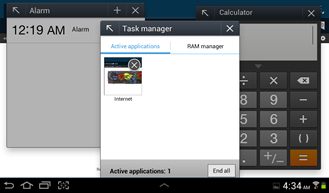 One other great addition feature: if you long-press and drag an app icon on the home screen or in the app drawer, a bar of icons appears at the top. Most notably, on the left is a button for more info. Drag the app to the info icon and it will take you directly to the app's info page usually found under Manage Applications in settings. If you've ever needed to force stop, or clear the data/cache from an app, this is a welcome addition as it makes finding this page much, much easier. [Update: Thanks to Adam Powell for pointing out that this is actually part of the stock launcher. Of course that would come from Google.] 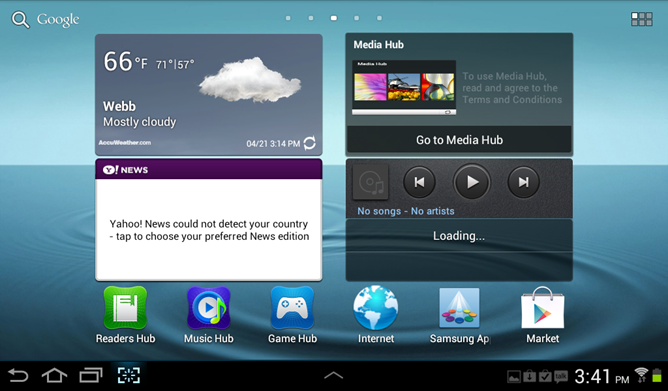 The screenshot button cozying up with the multitasking button.

Samsung has also added a persistent screenshot button to the status bar, right next to the multitasking button. In all honesty, this seems like a pretty horrible place for it, as I found myself accidentally pressing it more than once. What's more annoying is every time you take a screenshot, you get immediately taken to an annotation page where you can write notes on your screenshots before saving them. On the other hand, when you want to take a screenshot, you can just tap this button, and even write notes on your screenshots before saving them! It's a mixed blessing that's only really obnoxious when you trigger it accidentally.

While this app isn't technically a Samsung exclusive, the Tab 2 is one of two Samsung devices that supports IR blaster functionality in the Peel Smart Remote app. If you missed it on the Tab 7.0 Plus, here's the deal: your tablet is now your universal remote control. The app has support for a ton of codes for a variety of manufacturers of TVs, DVRs, DVD players, and other home theater boxes. 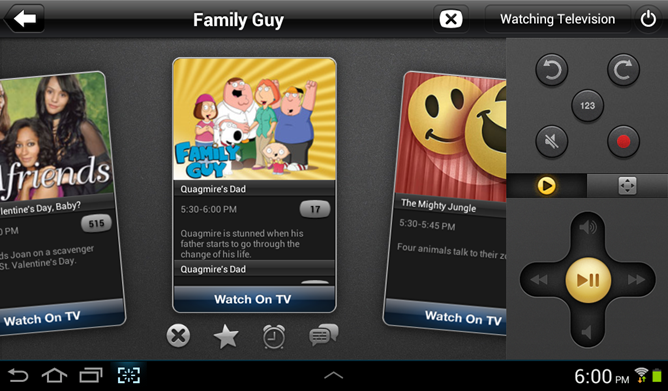 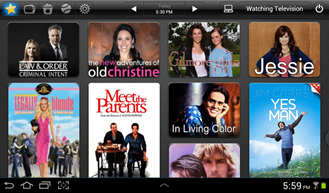 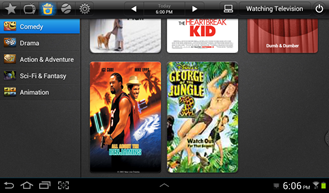 In addition to consolidating all of your controls, the app also gives you access to your cable service's catalog (where available) and lets you browse what shows are on right now. Unfortunately, it doesn't have a search box, but you can select what types of shows you like and browse the categories. Tap a show and it will give you a description of the episode that's on right now and even the option to change the channel right to it.

The app is basic, yet still manages to cover most of your channel surfing bases. While Google is trying to kill channel surfing entirely, Peel manages to turn the desperate and lazy search to find out what's on into a rather pleasant experience for the first time. Which is crazy since we've been doing this for decades now. As surprised as I was that I'd be including this sentence in this review, you could probably throw away your remote controls and use this tablet instead. 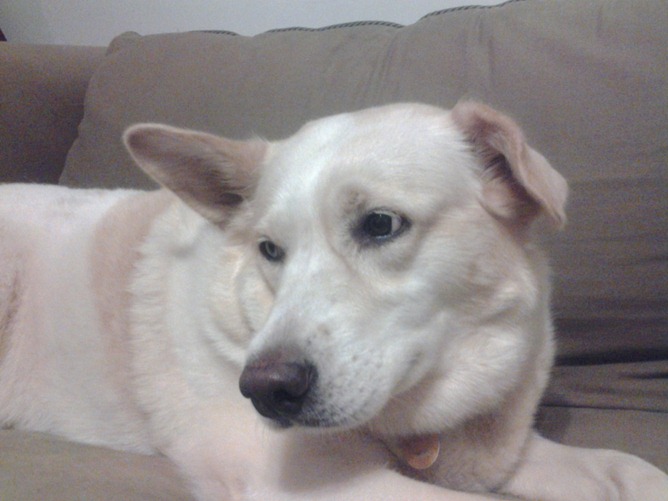 Poor Sandy looks washed out and dull in the Tab's camera.

This camera is nothing to write home (or on the internet) about. The front camera does a decent job of video chat, largely because none of us expect decent quality when video chatting. The rear camera, though, is another story. At 3.2MP, this camera ranks among some of the lowest of the low end. Photos taken with it are bordering on worthless. While "the best camera is the one you have with you," we wouldn't suggest leaving your house with just this tablet if you think you might take any pictures.

For moderate usage, this tablet holds up extremely well. The device lasted all day with intermittent casual browsing, video playback and IM/email work. Video playback was a pretty substantial battery drain. The Tab may keep you entertained on a domestic flight, but if you intercontinental travel-sized chunks of time you need to fill up, you might be reaching for a charger before the end of the day. That's still a minority of users, though. As with most tablets, this device lasts longer than most smartphones.

"When you do things right, people won't be sure you've done anything at all." These words ring exceptionally true with this tablet. My job is a simple one: make sure this device does what it says it does and find things that are wrong. With the exception of the previously mentioned size issues, and the obviously horrible camera, there's little about this tablet that stands out as noticeably bad.

That being said, any tablet is only going to be as good as its ecosystem. Android, as a whole, has gotten a lot better over the last year in regards to tablets. The selection of tablet-oriented apps, however, is still lagging. Facebook's app still only has a phone layout (which actually works better on this screen, but still could could be improved). What's worse is that many apps don't take into account tablets of such a low size/resolution. Take a look at the top navigation bar for Flixster's app in portrait mode, for example: 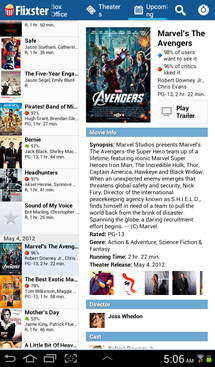 Because this app expects to have more room, text gets cut off and the interface just looks weird. While little things like this don't make the device any less capable, it does make the experience as a whole feel incomplete. It's not nearly as bad as it was. I bought a Xoom the month it came out and I've watched the app environment grow up as time goes on. Life on Android tablets is way better than its ever been. However, 7" tablets (especially the low-res ones) and 10" tablets are, in some very tangible ways, different beasts. In fact, for some situations, they require different considerations from developers while designing their apps, so it may be a while before Android fully catches up with itself in the app department. 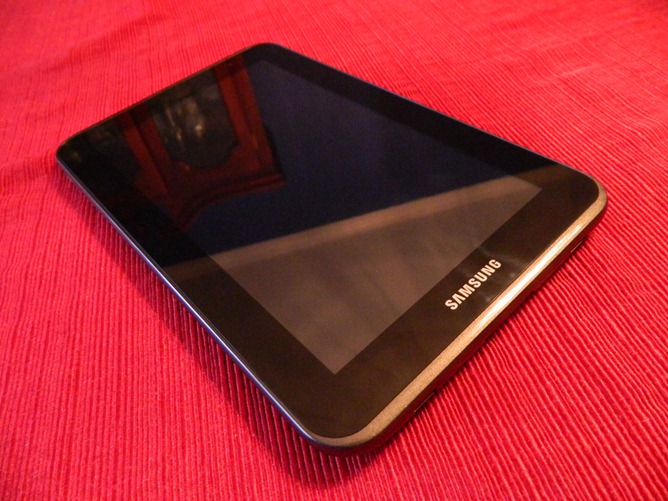 Samsung is certainly giving the other budget Android tablets a run for their money. At $250, the Nook Tablet and the Kindle Fire are both cheaper, but $50 is a small price to pay for the full Ice Cream Sandwich experience, an IR blaster that turns the tablet into the most advanced universal remote you've ever used, and 50GB of free Dropbox space for a year. It's not the best tablet on the market, but it's not supposed to be, either.

If you're looking to get an Android tablet on the cheap, but don't want a specialized device that's tied to a non-Google ecosystem, the Galaxy Tab 2 7.0 is the way to go. Just don't be surprised if you're waiting patiently for a few apps to make good use of your new tablet's extra space.

Reminder: AT&T's HTC One X Pre-Orders Begin Today For $199 With A Two-Year Agreement