It's pretty clear that many consumers are interested in the gargantuan Galaxy Note. Unfortunately, it hasn't seen the same kind of mainstream success as the Galaxy S2 because only AT&T has had access to the device. But according to FCC filings and a user agent string obtained by TmoNews, T-Mobile is preparing a device that multiple pieces of evidence point to being the Galaxy Note.

First off, we have the screen resolution: 800 x 1280. It's possible that this could be a refreshed version of the Galaxy Tab, which features the same resolution, but it is most likely still the Note because it is listed in portrait orientation and is listed in other documents as a phone rather than a tablet. 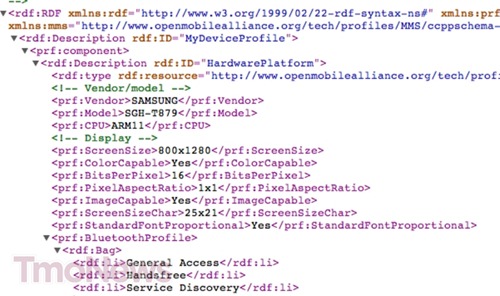 Second, the model number: SGH-T879. The format SGH-Txx9 has historically been used as a Samsung device on T-Mobile's network, and on a Bluetooth document the SGH-T879 was listed as a "variant" of the SGH-i717, the model number of AT&T's Galaxy Note (this reference has since been removed).

Finally, the user agent string (shown above) is the same as AT&T's version of the Galaxy Note. While none of this is an actual confirmation that T-Mobile will be carrying the Galaxy Note, it does give us a lot of evidence to believe it will be. The only question is, will anyone be interested in the Note when the Galaxy S III (or whatever Samsung decides to call it) hits?

[Weekend Poll] Do You Use Cloud Storage With Your Android?