If you haven't noticed yet, AP comments are now powered by Disqus. It took a really long time to squash all integration bugs and accept some downsides of moving to a non-native comment system, but when two complicated systems and over a hundred thousand comments are involved, migration gets a little tricky (to say the least).

After studying the code of the Disqus plugin to the point that I am now familiar with it more intimately than I ever cared to be, over 200 emails with the Disqus team, reporting multiple bugs and submitting code patches, many sleepless nights, ripped our hairs, and cursing, I was finally satisfied enough to pull the trigger last Saturday night. The beast was unleashed, and after about a week rolling with Disqus, I wouldd say it's a big success. There are still numerous issues that the company will hopefully work out in the next few months, but for the most part, the pluses outweigh the minuses.

On the surface, here are some user-facing benefits of using Disqus:

In general, less friction should translate to more comments, and if it's easier for you to join a conversation, we are doing something right after all.

Here are some problems with Disqus that may not be immediately apparent:

In Disqus' defense, other comment systems aren't perfect either - for example, when I tried LiveFyre, I found it to be nicer in certain aspects but lacking severely in others, prompting me to go back to trying to implement Disqus.

If you think the regular Disqus interface is nice, just wait till you see what they have in store for us for 2012. The new "Disqus 2012" interface, currently in limited beta, is much-much cleaner and nicer. Check it out: 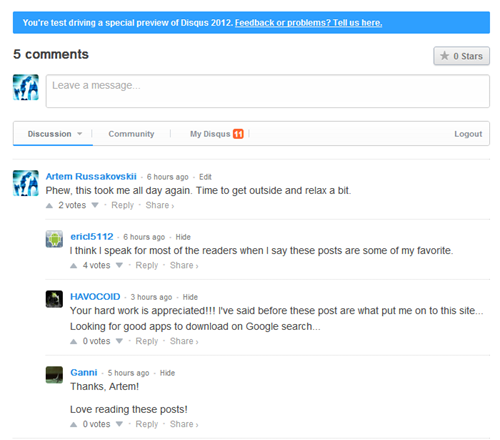 What a refreshing look, isn't it? Notice comment downvoting in addition to upvoting, letting you bury the bad guys just like you do on Reddit. We also get easy comment sharing options, more profound Community and My Disqus tabs, and for moderators - more streamlined controls which require fewer clicks. I absolutely love it, but it is missing some core functionality right now due to being an early preview.

Disqus 2012 isn't something I can turn on for you - it's a client feature attached to your Disqus account. You can test drive it here, if your account is eligible. Let's just say I'm very excited and can't wait for it to be completed.

So, enjoy better, easier comments on AP, folks. In fact, why don't you take Disqus for a spin right now and leave a comment or two? Go on, we love to hear from you.