While we're not looking at an impartial source here - or at some real numbers, facts, or figures - mobile giant (and company behind the Tegra series of chips) NVIDIA has released a slide showing console, PC, and mobile graphics performance from 2001 and estimates to 2014. According to their roadmap, mobile devices will have the graphics performance of the Xbox 360 by 2013, and surpass by 2014. 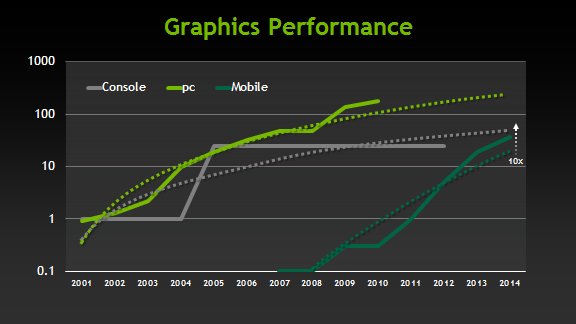 Certainly looks impressive from my spot here in early 2012, but we'll just have to see when we get there. Though I have to admit, I certainly wouldn't mind playing true Gears of War on my phone or tablet...

Eden To GREEEEN Pops Up On TegraZone With Q2 2012 Release Date, Will Let You Beat Up Steam ...