Calling a support line sucks. You're already in a bad situation, or why would you be calling in the first place? As Google demonstrated with its support of the Nexus One, though, the only thing worse than calling a support line is not having one at all. Thankfully, Google now has a phone-based support system that lets users talk to a real person 24/7 about problems with the Play Store. Like most things Google, it's actually a pretty interesting take on the old tech. 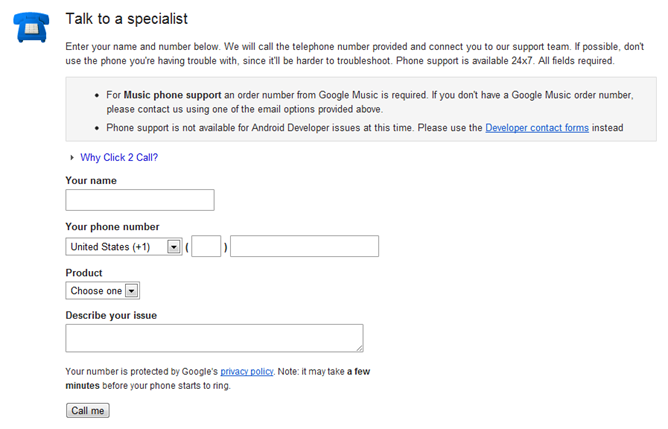 Our People Will Call Your People

For starters, using Google's phone system is different in that you don't actually get a number to call. You get a form. Now hang on. Let me finish. In this form, you enter your name, phone number, the product you're calling about and a description of your problem. They say this saves you the trouble of answering a bunch of questions about your identity once you're on the call, but the rep still re-asks these questions. I was told they just do this to confirm they're talking to the right person. Compared to most call services, it's a breeze, but it's still a little jarring that they ask for the same info twice.

Once you've passed your initiation, though, the reps get right down to business. I placed a couple of calls where I pretended to have a problem (sorry for the deception, guys!) and as soon as they confirmed my email address, the reps immediately asked me about the problem I'd described in the form. They already had a heads-up and I didn't need to waste time with a phone stuck to my face. This was a nice change of pace.

This Call May Be Monitored For Quality Assurance Purposes

I placed two different calls with the Play Store, feigning problems in both instances that I have actually had in the past. On the first call, I told the rep that I was unable to install Photoshop Touch on my tablet via the Play Store web interface. The option for my device was greyed out. In reality, this was actually because it was already installed on my device and the story would be that I'm an idiot who can't find his icons. A true story by the way. Wasted half an hour once on this problem.

Unfortunately, we never got so far as to discovering my idiocy. What should have been a simple solution ("The app does say that it is compatible with the Xoom"), became difficult when the rep told me she was unable to find Photoshop Touch in the Play Store at all. This was particularly troubling as I could see Photoshop Touch in the web store and told her as much. She politely said that the app wasn't appearing in her system and offered to send me the contact info for the developer.

The next call I placed was to the Play Movies department. I told the rep that I placed an order for Real Steel, and that the order had gone through, but I never received a confirmation email, nor was my movie available. This, too, was a real problem I had at one time. This rep helpfully checked my purchase history and confirmed that no charges had been made to my account. He also informed me that, in the rare event a double-purchase request gets sent through, the system will automatically detect that I paid again within the same rental window and remove the second charge, so I shouldn't worry about reordering if something goes wrong in the future. Thanks!

Out With The Old, In With The Slightly Less Old

After both of these calls, the reps asked me if I wanted to take part in a short survey. Since I am a lying liar who lies, I figured the least I could do is take part in their survey after I wasted their time on fake support calls. I was surprised to find that the surveys used the old-yet-typical "Press 1 for X" style menu options. Given Google's history with voice-recognition tech, I would have expected at least the option to say "Satisfied" instead of pressing a number like many airline phone support systems use.

Then again, it being Google, I also would've expected that a survey could've been emailed to me instead of performed over the phone. Both calls ended with an email sent to my account with a summary or more info. Maybe a link could've been included here? Then again, Google still seems to be working out this system. The subject line in one of the emails I received after the call was regarding "Your question about movies on Google Paly." Clearly there are some kinks to be worked out.

Overall, though, this is a huge step in the right direction. If nothing else, the form system is great. Calls were connected in a very short period of time and alleviated one of the biggest problems with phone-based support: an extremely long wait between placing the call and talking to a real person. Clearly Google is trying to make phone support better and it's on the right track. Far better than the company has done in the past. It's not there yet, but if the process could be this smooth with other companies, I might have less stress in my life.