All manufacturers want to make sure that apps work properly on their devices. Of course, the best way to make sure an app works on any given phone is to actually test the app on the device in question. For developers, though, that could cost a substantial amount of money - just think about how many Android devices are out there at the moment.

As an answer to this quandary, though, Sony has come up with a unique plan to allow developers to borrow Xperia devices. For free. 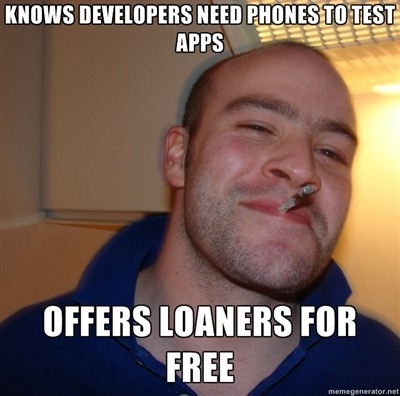 The deal is pretty simple: Sony is willing to offer up a few of its more popular devices  as loaners for developers to test their apps on for 30 days. While the service may be free, each customer is allowed only one device at a time to test on. Available devices in include:

Any developers who wishes to participate in Sony's Device Loaner Program will simply need to sign up for the service, verify the account, and, of course, put a credit card on file (hey, Sony needs some sort of collateral here). Past that is a mystery to me since I didn't actually sign up or the service, but I'm sure there isn't a lot more to do aside from choose your loaner and wait for it to show up. While the service is targeted primarily at devs in the US and Canada, developers in other parts of the world can take advantage of this, too - but they'll having to pay for international shipping and any customs fees that may apply. Still, it beats the heck out of having to pay full retail for a number of different devices.

[Updated: Here Are The Winners!] Giveaway: Satisfy Your Hunger With One Of Ten Free "Nom" ...

The Play Store Has A 24/7 Support Line You Can Call, And It's Actually Kind Of Good