Yup, you heard me correctly - 20, not 18 or 19. Even though the previous major release was 17, 18 followed up shortly after with some minor changes, and 19, even more minor, wasn't even posted to the downloads page (see here for the reason). The problem is SDK Tools point releases are currently not supported, so even for small fixes, the team has to rev up SDK Tools to the next major version and keep ADT's version in sync to avoid confusion. They're working on adding point release support to SDK Tools, but until that's in place, we have situations like this one, with 17 -> 20 in a matter of weeks.

The most exciting feature is, undoubtedly, a brand new Property Editor, which left quite a lot to be desired in the past. I frequently reported bugs in it to the team, and I'm absolutely ecstatic to see it receive a full rewrite: 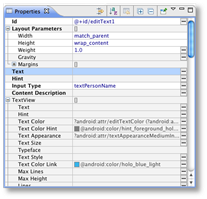 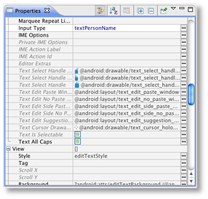 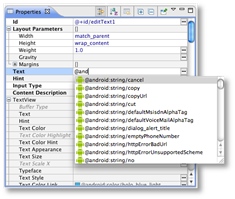 Another notable new feature in ADT 20 is NDK support for building and debugging, currently being introduced as alpha. Game and high performance app developers are probably popping champagne right about now.

As I mentioned in the title, ADT 20 also brings improved performance - for example, SDK data should load 30% faster in this release.

For the rest of the changes, check out the full changelog below:

While you can't use the SDK Manager to automatically upgrade to preview releases, you can still give them a go by installing them manually - just head over to the ADT 20 preview page and scroll down to Installation.