Confirming our suspicion that Sprint's variant of the Galaxy Nexus would be available on the 22nd, a pre-order page has gone live at Sprint.com, allowing customers to reserve Samsung's first Ice Cream Sandwich-powered device for just $199 with a two-year agreement.

What's more, the Now Network's pre-order page suggests that customers who buy early may just get their hands on a Galaxy Nexus sooner than expected:

Order online today, we’ll charge your card for your phone today and we’ll do our best to get it to you before others get a glimpse on Sunday, April 22.

As another added bonus, those who activate a Google Wallet account within a week of getting their Nexus will get a $10 instant credit, and an additional $40 credit "within two weeks." 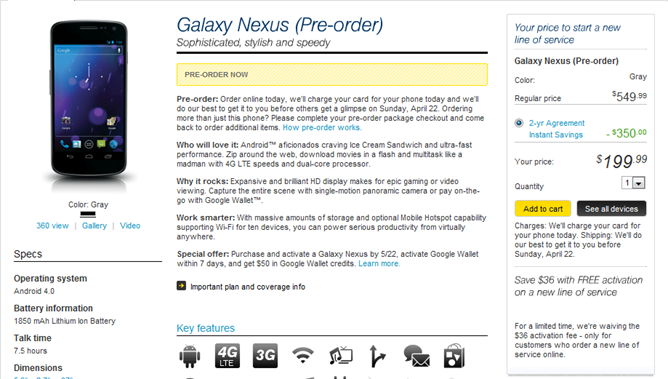 In case you've forgotten why Sprint's version of the Galaxy Nexus is exciting, here are some of its specs:

If you're a Sprint customer who's been patiently awaiting your chance at a Galaxy Nexus, just head over to Sprint's pre-order page here. Those interested can see Sprint's full press release below.

Sprint Continues 4G LTE Momentum with Launch of Galaxy Nexus by Samsung on April 22 for $199.99

Galaxy Nexus will be available in Sprint Stores, Sprint Business Sales, Telesales (1-800-SPRINT1) and Web Sales (www.sprint.com) beginning on Sunday, April 22, for $199.99 (excluding taxes) with a new line of service or eligible upgrade and two-year service agreement. Pre-order begins today at www.sprint.com/nexus. Customers who pre-order Galaxy Nexus will begin receiving their devices as early as Friday, April 20 – two days before the device goes on sale – while supplies last.

Galaxy Nexus on Sprint also features Google Wallet™, turning the smartphone into a wallet using Near Field Communication (NFC) to make safe purchases at more than 100,000 participating retailers. As an extra bonus, Sprint customers who activate a Google Wallet account within a week of activation of their Galaxy Nexus will receive a $10 instant credit on their Google Wallet account and an additional $40 credit within three weeks2.

“Galaxy Nexus is a beautifully designed smartphone that combines the Pure Google experience with the speed of Sprint’s upcoming 4G LTE network,” said Fared Adib, vice president – Product Development, Sprint. “It represents the cutting-edge features and applications that customers expect and pairs perfectly with Sprint’s unlimited data plans to let our customers enjoy their wireless experience without worrying about overage charges or throttling.”

Manufactured by Samsung Telecommunications America (Samsung Mobile), a leading global mobile phone provider and the No. 1 mobile phone provider in the United States3, Galaxy Nexus pairs the beauty of Samsung hardware with a Pure Google experience. It is built on Android, 4.0, Ice Cream Sandwich, which brings an entirely new look and feel to Android. Simple layouts with subtle animations and delightful flourishes make everything feel alive. The home screen, web browser, email and everything in between have been rethought and redesigned to make Android simple, beautiful and beyond smart.

Galaxy Nexus has a full-featured 5-megapixel camera with automatic focus and 1080p video capture, top-notch, low-light performance and zero shutter lag. Open it right from the lock screen and fire off a photo instantly. Snapping several photos is quicker than the blink of an eye, and single-motion panoramic mode lets the user take beautiful panorama pictures with Galaxy Nexus.

· Face Unlock: Galaxy Nexus introduces a new, fun way to unlock the phone – with a smile. State-of-the-art facial recognition technology lets the user switch on their phone and look at it to get past the lock screen – no passwords to remember, nothing to type or swipe.

· Android Beam™: Share contacts, web pages, YouTube videos, directions and apps – just by touching two NFC-enabled Android phones back to back – tap to beam what’s on the phone to a friend.

· Google+™ Hangouts: Video chat with a group of up to 10 friends using the 1.3-megapixel front-facing camera, all on the go.

· Google Play™: With more than 500,000 apps, millions of songs and books and thousands of movies, Google Play has something for everyone.

· Google Wallet: Turn the smartphone into a wallet using NFC to make safe, secure purchases at more than 100,000 participating retailers.

· Google Voice™ makes people’s lives easier by providing one phone number to use for the rest of their life. Easily manage up to six devices with one Sprint phone number, use intelligent call routing and advanced call controls like call screening, blocking and recording, and online management of SMS, voicemail and call logs at www.google.com/voice.

Galaxy Nexus customers can enjoy an unlimited data experience with Sprint Everything Data plans. Sprint’s Everything Data plan with Any Mobile, AnytimeSM includes unlimited web, texting and calling to and from any mobile in America while on the Sprint Network, starting at just $79.99 per month for smartphones – a savings of $40 per month versus Verizon’s comparable plan with unlimited talk, text and 2GB web, or $10 per month savings versus Verizon’s 450-minute plan with unlimited text and 2GB web.

Sprint recently announced Atlanta, Baltimore, Dallas, Houston, Kansas City and San Antonio are expected to have 4G LTE and enhanced 3G service in mid-year 2012. The anticipated launch of these large metropolitan areas demonstrates the continued commitment by Sprint to invest in its network through Network Vision. Sprint customers in these areas will soon enjoy ultra-fast data speeds and improved 3G voice quality. For the most up-to-date details on Sprint’s 4G LTE rollout, please visit www.sprint.com/4GLTE.