Archos may not make the most headlines for its series of mid-range tablets, but occasionally, one of them deserves a mention. The Archos 101 G9 is a strong contender for your money if you're on a tight budget. The savants among you may want to hold off for a Galaxy Note 10.1, or whatever Google is cooking up for its tablet line. Still, with prices starting at $270 for the 8" 8GB version to $330 for the 10" 8GB version, it's difficult to ignore. Oh, and did I mention it runs stock Ice Cream Sandwich?

On the inside, the tablet isn't a beast, but it's no slouch either. The dual-core OMAP 4460 is clocked at 1.5Ghz on the Turbo model. While it feels just the tiny bit dated compared to this season's more fashionable Tegra 3 or Snadragon S4 SoCs we're seeing in phones and tablets, it's the same processor as in the Galaxy Nexus, so it's more than capable of holding its own.

Most of the other specs are a little disappointing, if expected of a lower-end device: there's no rear camera, and a moderate front-facing camera that's really only good for video chat. The slate also includes a mini-HDMI port that can be used to mirror the tablet's display on your HDTV.  A standard micro-USB port and GPS round out the fairly meager specs. With one pretty major exception: 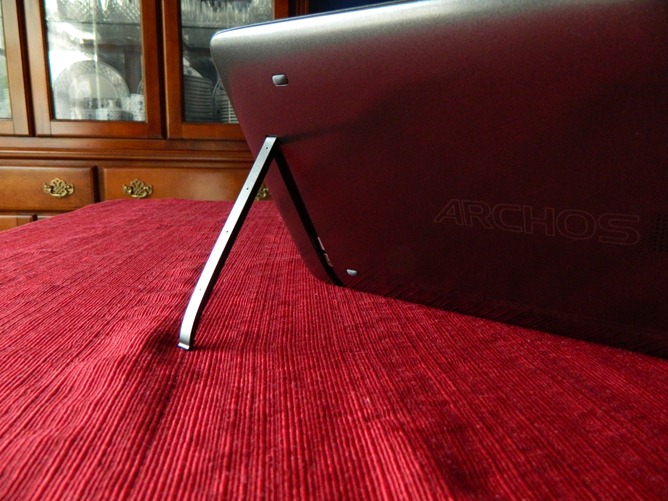 The kickstand. Frankly, I'm at a loss to explain why more tablets don't have this relatively simple feature built-in. Perhaps I'm biased as an old Evo fanboy, but kickstands on tablets just makes sense. More sense than kickstands on phones anyway. In fact the only fault I could find with this kickstand was how flimsy it felt. The slightest amount of pressure on the top of the device when propped up could bend the kickstand backwards. It felt like it would be easy to break if the user wasn't too careful. Still, I'd rather have a flimsy kickstand than none at all, which seems to be the choice we've been given so far. 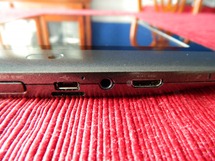 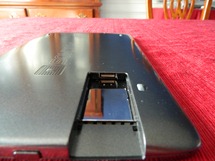 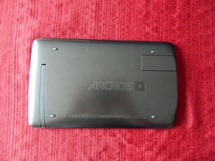 The flimsy kickstand wouldn't bother me so much if it didn't serve as a difficult-to-ignore reminder of how subpar the build quality of the rest of the tablet is. My current tablet is the original LTE Xoom and, while it's had its share of problems, the hardware has never been one of them. A sturdy, aluminum case makes the device feel solid and difficult to damage. The Archos 101 G9, on the other hand, felt plasticky and flimsy. Of course, the Xoom also cost about three times as much, so it's obviously a trade off. With the exception of the kickstand, though, there really aren't that many ways to damage a tablet unless you're careless with it, so it's not a huge issue.

Once you turn the tablet on, though, is when you start to fall in love with the Archos tablet. Though, it might be more accurate to say you'll fall in love with Android. Archos made the incredibly smart decision of running pure stock Android 4.0 on this device. There are a few apps that Archos made themselves, but those stay out of the spotlight if you don't want to use them. All your favorite stock Google apps are here, unmodified, unskinned, in their full ICS glory the way Google intended. While Archos may not have been the brains behind the software, they deserve credit for not trying to make their mark by tarnishing a good thing.

Of course, that would be a pointless compliment if Ice Cream Sandwich wasn't such a huge improvement over Honeycomb on tablets. There are very few Android tablets running 4.0 right now, even fewer unskinned, but if you haven't experienced it (read: if you don't own a WiFi-only Xoom), it's something to behold. 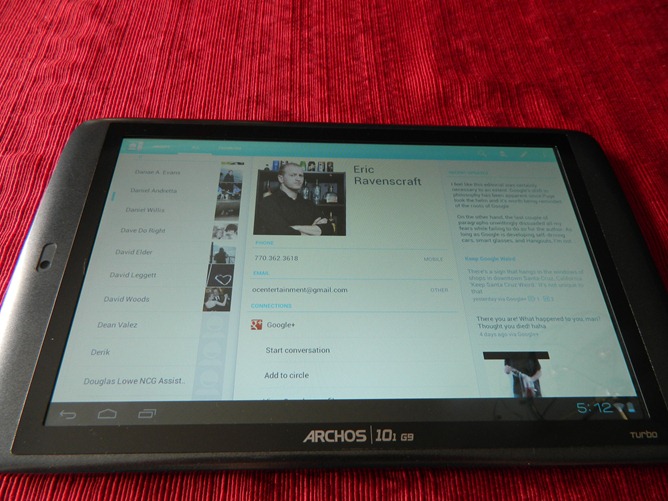 The People app feels right at home on a 10" display

Ice Cream Sandwich is no less breath-taking on tablets than it is on phones. Google amply demonstrates how the concept of Fragments and multi-pane apps should be laid out dynamically across different devices. Above, you can see my contact list, my own contact card, and my Google+ feed laid out side by side. Each would be their own pane on a phone but here, they're appropriately spread out in a perfectly intuitive and easy-to-navigate manner. For once, Google is leading the way in app design on Android.

It does video chat ok. If you're looking for anything beyond that, you're barking up the wrong tree. Even for video chat, though, the placement of the camera is a little odd. The G9 has extra space on either side which are obviously meant to be a place for your hands while holding the tablet in landscape orientation. The camera, though, is right in the middle of the left side's grip space. Even when propped up (on that lovely kickstand), video appears from an odd, off-centered angle. While being held, the video may be obscured entirely. It seems to be designed to be held in a portrait orientation for video chat, but virtually everything in Android is designed with a landscape mode in mind, so it's unclear why Archos went with this placement. Still, it exists, which is more than can be said for the rear camera. 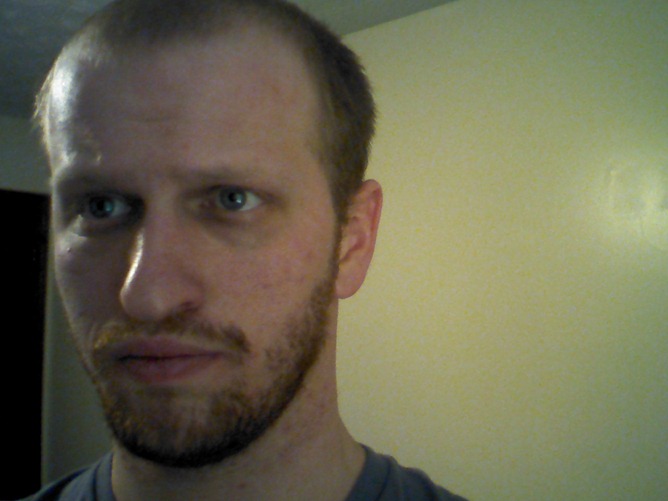 In a well-lit room, facing the direct center of the tablet, this camera performs pretty poorly.

I'd like to start this section with an anecdote, if I may, because this device impressed in an unexpected way. Mere hours prior to receiving my review unit, I misplaced my phone charger because I'm an idiot. Thankfully, the Archos came with an identical micro-USB charger. For the moment, I was saved, but I dreaded pulling double-duty with this charger. My phone can barely last a whole day without a careful charging plan. How would this phone and tablet last if they had to share a charger?

The answer, surprisingly, was "pretty well, in fact!" I typically use a tablet as a secondary computing device while I work on my desktop, which means it has to perform the duties of web browsing, chat and text message client, note pad, and even TV. There's nothing I don't make my tablet do during a given 10-12 hour day, including sitting with its display on for no good reason because I like to waste electricity. Even right now, the tablet is on at my homescreen, showing no useful information. I just love paying high power bills, I suppose.

Yet, with the exception of prolonged TV show marathons (to the tune of 6 hours non-stop while I work), this tablet took everything I threw at it. The tablet is packing a 7450 mAh battery, so it's no slacker, however the real test of a battery is if it can last long enough to do what you need it to do. In the old days batteries would last for days without a charge and really, we're all just biding our time until we're back there again. In the tablet world, at least, we're close, if we're not already there.

Let's get the big ones out of the way first: this tablet runs hot. Unnervingly hot at times. On one occasion, I picked up the tablet after it had been sitting idle for an hour with the screen off and it was uncomfortably warm to the touch. It seemed like this was due to the tablet trying in vain to find a GPS signal, but even then, it's not good when a tablet runs hot without being used.

The device was also prone to semi-frequent freezes. On more than one occasion, the tablet would freeze and require a hard reset to fix the problem. Holding down the power button until the device restarted seemed to work (about 10 seconds or so), though at least once I needed to just wait for the device to reset itself.

Also, most puzzlingly, I sometimes found that after waking the tablet, the device would be experiencing a series of touch inputs in the lower left corner of the display without my hands on the device at all. It's unclear if the screen is just extra sensitive or if it was a defect of the digitizer itself. I would turn the display off again, polish the screen, and the problem would go away, but it was intermittent and very annoying as the back button is in the bottom left of the screen, so the tablet would think I was trying to back out of anything I was doing.

None of these problems made the tablet unusable. In fact, oddly, it was still more of a joy to use than my Xoom at times. However, they are problems that tablets at an even slightly higher price point would be publicly hanged for having. Even at $330, this tablet is pushing it. 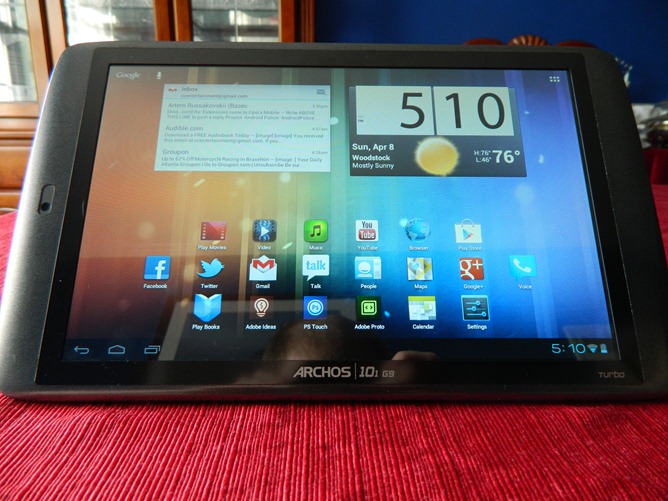 Here's what it boils down to: if you're looking for the dirtiest of the dirt cheap tablets without sacrificing functionality and you're not a fan of 7" tablets, this is probably the way to go. ASUS is certainly trying to compete with Archos in this market, but for the moment, ASUS cheapest tablets are either not on the market yet, too small, or possibly scrapped to make way for a Nexus tablet.

The biggest advantage, though, is really Ice Cream Sandwich. If Google were to release an unmodified Nexus tablet in this price range, it could seriously hurt the G9 line's chances of seeing any commercial success. I applaud Archos for making the decision to let Google handle the software, but the budget tablet market isn't staying vacant long. While nice for the price, the G9 may be too little, too late.