Google Currents is probably the single best-looking Android app Google puts out, and since its initial release, it has also been so slow to sync that it's practically useless. But no longer - Currents has received its first major update, and rather than drag this thing out, I'll just present you with the changelog:

If you're not familiar with Currents, it's Google's take on a news aggregator client, with a particular focus on images and "digital print" style presentation. With the new update's improved sync functionality, it's definitely a worthy competitor to apps like Pulse and News360. You can also check out Android Police on Google Currents!

In the screenshots below, some of the differences you'll see are a "Sync now" option, as well as a "Preferred language" setting. Of course, the biggest changes have happened behind the scenes, with the most important being massively improved sync speed (it took ages for Currents to sync in the previous version). International availability, translated editions (courtesy of Google Translate, no doubt), and offline reading round off the major features added in this release.

There's also now a lot more control over how and when Currents will sync, allowing you to reduce the app's battery usage - a complaint many users had previously (see screenshot).

Head over to the Play Store to download it now, and check out the Google Mobile Blog to learn more about the new version. 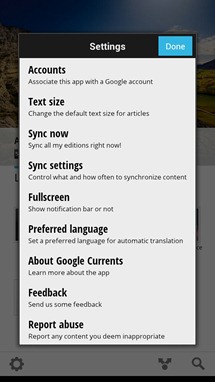 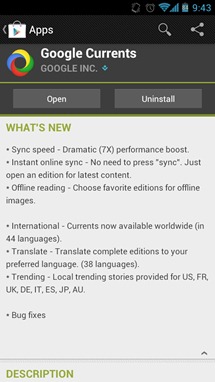 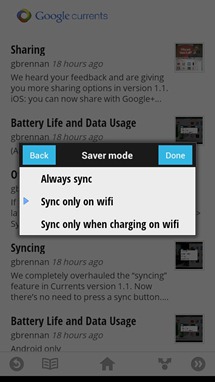