Anyone that has ever spent any length of time with an e-ink based e-reader like the Kindle or Nook can attest to their uselessness in dark spaces. Now it looks like Barnes and Noble is going to be taking a crack at fixing that shortcoming of e-readers in an effort to gain some traction in its battle against Amazon. Leaked signage points to an updated Nook Simple Touch with a front-lit screen, and it might be here sooner than you think. 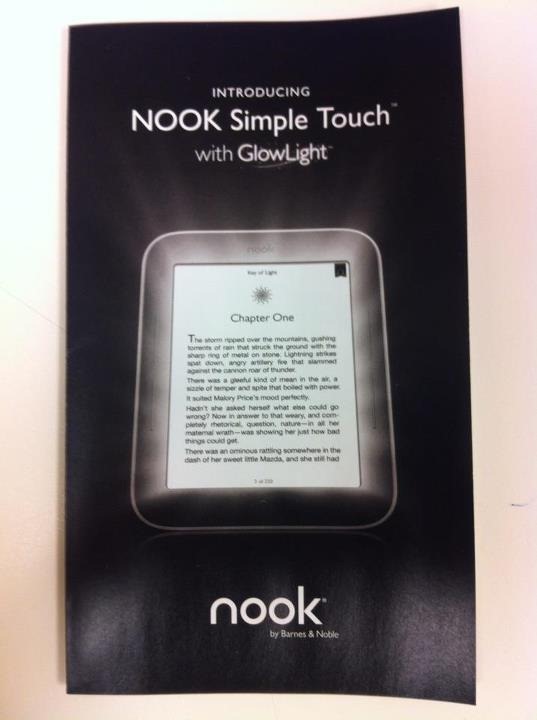 Barnes and Noble will apparently be calling the technology GlowLight, and if you don't like the name, tough. The retailer is going to be pushing it as a major feature of its Android-based e-reader. This technology is different from backlighting on a traditional LCD, though the effect is much the same. Front-lit panels have one or more LEDs embedded in the device casing bordering the screen.

Because e-ink screens are reflective panels, backlighting wouldn't work like it does for transmissive LCDs. A real benefit of front-lit e-ink is that the crispness and high contrast ratio are preserved, which can be a problem with some backlit LCDs. A single LED system should also be cheap and have very low power draw. Those are both very important points when you need a device to run for weeks and cost almost nothing.

A launch as soon as tomorrow, April 12, is a possibility. Although, I have to wonder how long until Amazon steals the Nook's thunder with an updated front-lit Kindle.

Linux Tycoon, "The Nerdiest MMO Ever Conceived," Headed To Android With Online Play