If there's one thing that I hate about having multiple Android devices, it's the inability to easily keep application data synced across them. For example, I love hidden object games and usually play them on my Transformer Prime. But, if I want to play the same game on my Nexus, I can't pick it up from where I left off on my Prime. And that's just lame.

Enter a new [badass] app called DataSync. If you have app data and want to keep it synced up between multiple devices, then this is the app to have.

One of the best things about DataSync is that it just works. No complicated setups, no signing up for a service, nothing of the sort. It lets you sync your data one of three ways: over Wi-Fi (local only), over Dropbox, or over FTP. Once you've chosen your preferred sync method (I went with Dropbox), you're just a few taps away from syncing your data. 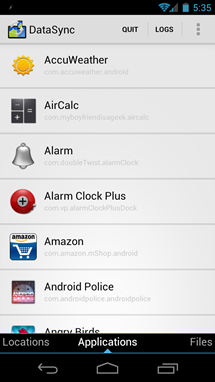 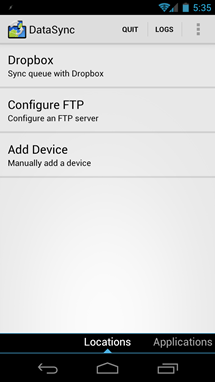 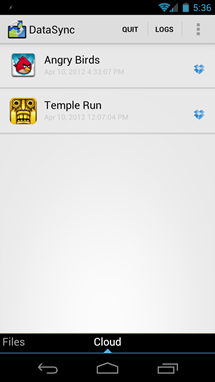 After choosing your sync method, you're presented with a list of your applications. Simply tap one to add it to the queue, and then swipe over to the 'locations' screen to upload the data.

Downloading is equally as easy, too. If you chose to sync your data with Dropbox or FTP, swipe over to the 'Cloud' screen, which should display all of the data that you've synced up. Tap the items you wish to download (adding them to your queue), swipe back over to the 'locations' screen, and tap your sync method (Dropbox or FTP). DataSync lets you know what's going on the entire time, as well as once it's finished.

To get a better idea of how it works, here's a quick video demoing the app:

Sold? I thought you might be. The app is free in the Play Store, so hit the widget to grab it.