Ever since we started calling camera phones "phones," we've been trying as hard as we can to replace as much of our prohibitively expensive camera equipment as we can. Our phones' sensors have been beefed up to "actually pretty good" quality, we've seen several different attachable lenses. Now, thanks to Kickstarter, we've also found the last camera mounting accessory we'll ever need: the Slingshot, which functions as handheld stabilizer, mini tripod, and professional tripod mount.

As with all Kickstarter products, this little device isn't for sale yet, but if anything deserves a shot at being a proper product, it's this little guy. The bulk of the magic happens in the cradle which, according to Charles Waugh, designer of the product, is flexible enough to hold phones of any size. He even says it's sturdy enough to hold the gargantuan Galaxy Note. Unfortunately, we don't get to see this feat, instead only seeing the product gripping an iPhone 4 and an HTC Incredible inside a case, but it holds on to both with an impressive grip, even upside down. 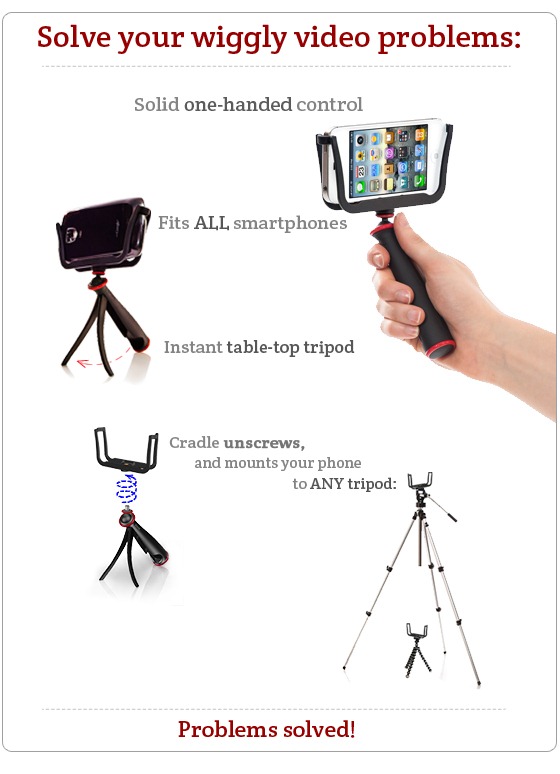 The rest of the Slingshot, namely the handle, is a multipurpose tool. When you're taking mobile video with your mobile phone, the handle gives you control of the device with a single hand, leaving the other hand free to manipulate controls, or to simply reduce camera shake. If you just want to take a steady, up-close video, two small legs pop out of the handle and create a makeshift tiny tripod. The design is one of those ideas that's so clever, we're left to wonder why no one thought of it sooner.

Of course, a handle with a ball joint or a tiny plastic tripod is no replacement for your expensive professional tripod with all the bubble levels and gyroscopic doodads that keep everything level. The cradle, however, can be detached from the handle and screwed directly on to any tripod with a standard 1/4-20 mount (read: just about all of them), so you can have the best of both worlds if you'd like.

So far, the project is 43 days and about $15,000 away from reaching its goal. Donations that net you a free Slingshot if the project succeeds start at $14, which is not too shabby for a product like this. Check out the source link if you want in on this action. In the meantime, I'll be pawning off all this useless and expensive video and camera equipment I bought over the last five years because I'm a chump.