Adding a tempting new device to the current pool of affordable 7" tablets, ZTE and Sprint introduced the 3G-connected Optik in February, bringing to market a great 7" display, Android 3.2 Honeycomb, and an ample 1.2GHz dual-core snapdragon processor, all for $99 on a new contract. In a nutshell, the Optik is a decent 7" tablet for those on a budget. While it isn't the best tablet around, it's powerful enough for most tasks, feels great in the hand, and isn't too bad to look at. Here's a more complete look at what the Optik has under the hood:

Before we get started with the full-on review, we'll look at just a few of the Optik's positive and negative points.

In A Sentence: The ZTE Optik is a  very capable 7" tablet with a great display, form factor, and (especially) price point, though it lacks in certain other areas which users may or may not find critical in a tablet experience.

You Should Buy It If you're looking for an extremely affordable 3G-connected tablet that won't weigh you down, but which can perform for everyday browsing, multimedia, and light gaming. 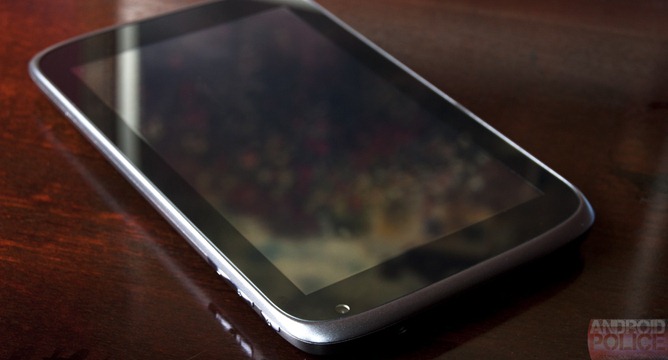 Overall, I can only describe the Optik's form factor as "unique." With a bezel that's slightly wider at the top and bottom, holding the tablet in landscape mode feels great. This is enhanced by slightly raised rubber grips around back, though ZTE seems to be sending mixed signals – despite the brilliant rubber grips, the tablet doesn't seem to be intended for landscape use. One major clue to this is the volume rocker, which (if viewed in landscape) has volume up on the left and volume down on the right. On the other hand, the power port and speakers live on the bottom edge of the device. It seems to me like the designers behind the Optik's body wanted to convey that the device could be used in portrait or landscape mode, but ended up with jumbled, inconsistent placements and orientations instead.

That being said, the device feels solid. It's weighty without being too heavy, and frankly feels "right" in the hand. While the microphone and rear camera are pretty easy to cover up, I was able to get past the learning curve pretty quickly and adapt to holding it in a manner that retained its utility without causing discomfort – not to say users should have to adapt to a product simply to achieve comfort. 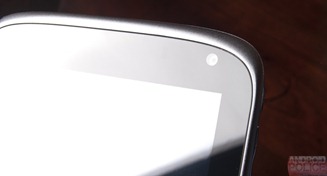 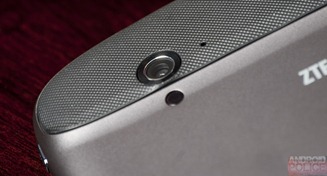 Compared with devices like the ultra-sleek Galaxy Tab 10.1, the Optik is a little chubby, but I really didn't mind the extra thickness on a day-to-day basis, as the tablet not only felt durable and substantial, but also seemed to have a design with the human hand in mind.

All of that being said, it's worth noting that the Optik runs warm. The device warms up significantly even when browsing. While the device doesn't quite get uncomfortably hot, users will definitely notice an ominous warmth. 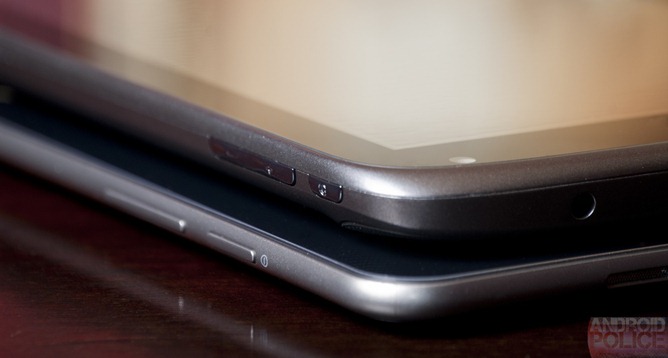 The Optik is running a slightly skinned version of Android 3.2 Honeycomb, with no Ice Cream Sandwich update in sight just yet. That aside though, the tablet's software seems to run pretty smoothly. The Optik comes preloaded with a hideously-themed Swype keyboard, which unlike Swype on 10" tablets, actually seems practical. 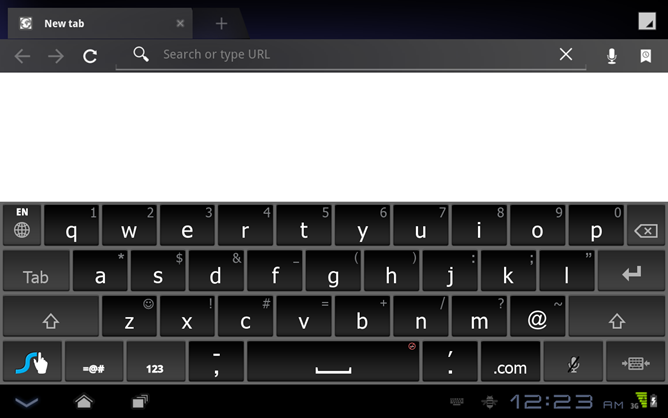 The only real issue that I had with the Optik software-wise was video playback. When trying to watch movies on the tablet, performance was spotty. Avi files would often develop progressive audio/video lag, or stop playing all together. I found myself looking at playback errors more often than actual videos, which was quite frustrating, especially since – in my opinion – a tablet should be able to handily deliver an easy multimedia experience. 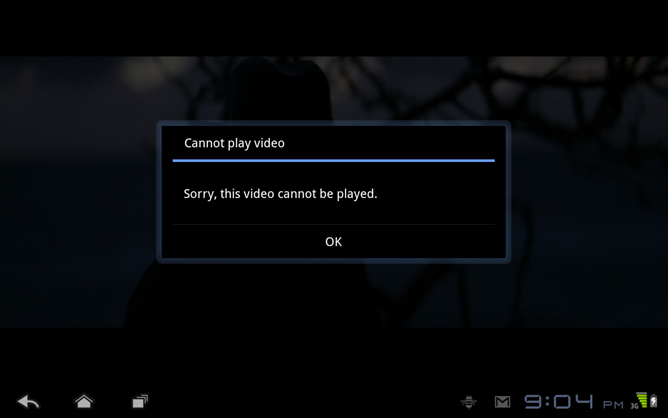 Video problems aside, the Optik's performance was – to borrow a tired phrase – "buttery smooth," and I didn't experience any lag whatsoever in general browsing, app use, or gaming. The tablet's 1.2GHz dual-core Snapdragon ensures that tasks are handled quickly and efficiently, and seems completely capable of keeping things moving even when running a handful of demanding apps, even though it scored well below the Galaxy Nexus and Galaxy Tab in Quadrant benchmarks with a total score of 1402.

One of the areas where the Optik shines is its display. The device is packing a 7" screen with an ample 1280x800 resolution at 261ppi (which compares favorably to the Galaxy Tab 7.0 Plus at 1024x600). The pixel density and resolution alone make the display strong graphically, but the color-checking fiend in me can't help but notice that its color temperature is a little off.

When reading a book or watching a movie, users aren't likely to notice any discrepancy, but the Optik's display has a notable blue/magenta cast when compared to a calibrated monitor. It should be made clear though that without color management options, pretty much any device's display will have some discrepancy from true color fidelity.

That being said, the Optik's pixel density is a major plus, and when comparing the screen at slight magnification to my Samsung Galaxy Tab 10.1 (which has a density of 149ppi), the difference becomes even clearer: 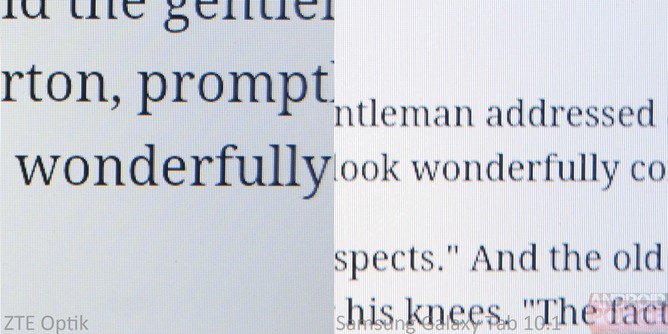 The Optik's battery was decent, but really not fantastic. On a full charge, I was able to watch a 2-hour movie, browse the web for ~1.5 hours, snap some photos, play a rousing round of Angry Birds Space, and look at a few YouTube videos before hitting the "14% Warning" at about 7 hours of use with a 1.5hr road trip somewhere in the middle. 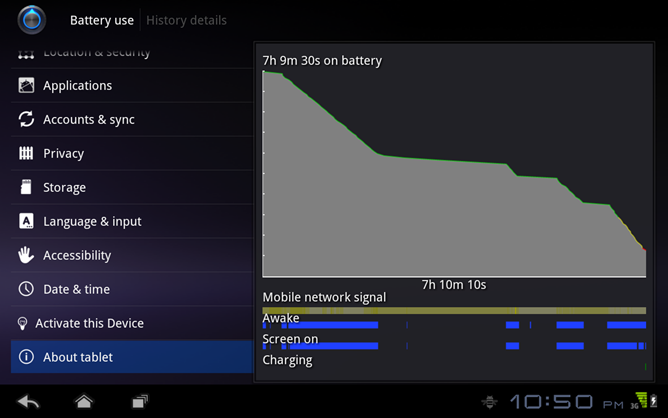 With a 4,000mAh battery on board, the Optik should be able to last you at least a day on one charge, though I couldn't help but yearn for my Tab's 7,000mAh pack as I watched the Optik's battery drain.

ZTE's Optik has 3G connectivity, hooking up to Sprint's EvDo rev. A network. During my time with the Optik, I had absolutely no trouble with connectivity or signal strength, and being connected anywhere and everywhere was super convenient, even if I was dealing with 3G speeds. Of course the Optik also has Wi-Fi connectivity, meaning you can opt for a faster web experience when a wireless network is nearby. 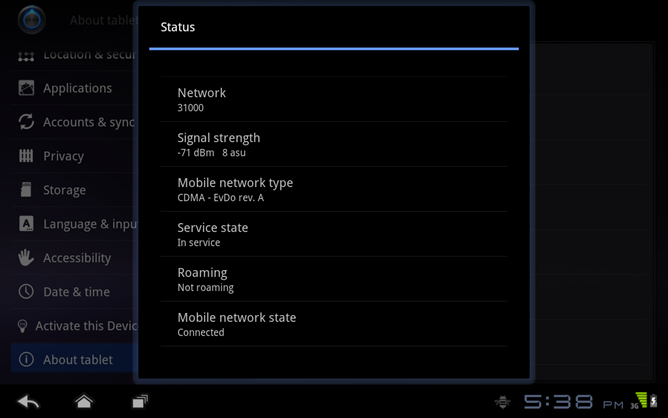 While I generally don't expect tablet devices to pack high-powered cameras, the Optik's camera is one feature that is definitely lacking.

Photos are decent, but not amazing. Colors are close to accurate as far as mobile sensors go, but users should expect intense amounts of noise when shooting in lowlight situations. In well-lit scenarios, lens flare and blown-out highlights are far too easy to come by (even using the camera app's handy exposure compensation slider). Furthermore, while the camera is capable of 4x digital zoom, I wouldn't recommend it – images taken at full zoom are hopelessly out of focus, and frankly hard to look at. 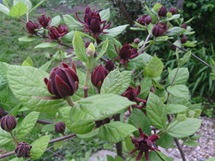 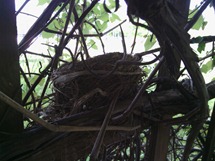 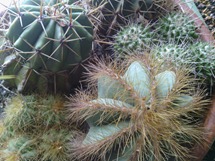 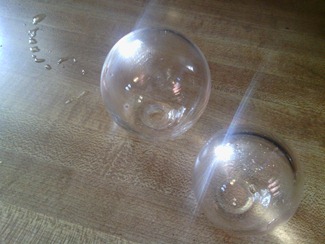 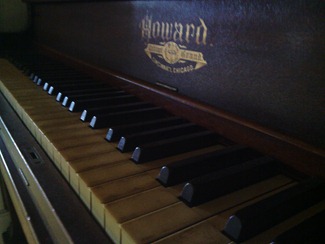 If the Optik's camera is okay, the camcorder is downright discouraging. Since Honeycomb's stock camcorder app lacks any kind of focus control, the camcorder will focus wherever it wants, and stick you with the same focal plane for the duration of the video. Further, videos recorded with the camcorder seem decidedly more noisy than photos.

The Optik's microphone is located smack in the middle of the right edge of the device (if held in landscape orientation), meaning it's extremely easy to cover, thereby muffling audio or turning your video into a silent film. If you manage to keep the microphone unobstructed though, it's actually quite sensitive. Before checking out the video sample below, you may want to turn down your volume, as the Optik picked up every bit of background noise (especially wind).

In the end, ZTE's Optik is a decent device. It certainly doesn't set any precedents, but for a 7" tablet that costs $99 on contract, it's definitely not bad. If you don't mind a somewhat lacking video/photo capture experience and can figure out the Optik's finicky video playback, this tablet can provide a smooth, enjoyable everyday use experience.

Those interested in picking up the Optik can grab it from Sprint's online shop for $99 with a new 2-year agreement.

Want To Make A Personalized QR Code With An Embedded Image? Esponce Can Help