In the last 2 days, we've seen a whole lot of Android 4.0.4 goodies. First, Google unleashed the Android 4.0.4 AOSP code, then followed up by sending out incremental OTA updates to the Nexus S, Galaxy Nexus, and XOOM Wi-Fi. Maintaining the momentum, today our favorite Android release engineer JBQ today put together full OS images for the GSM Nexus S and GSM Galaxy Nexus, which can be used to completely restore compatible devices back to stock.

Did a flash go wrong? Did you wipe /system by accident? Don't have an upgrade path to 4.0.4? Don't worry - with these full images you can forget your trouble and start with a clean slate.

Warning: These will wipe your device's user data.

Of course, before you start, you should make sure you have a compatible device. They are:

The soju image release is actually quite momentous - it's the first time a factory image has been published for any Nexus S model, and that is excellent news.

Head over to this page and download away. Make sure the checksum matches before flashing.

Here, I highlighted them in yellow: 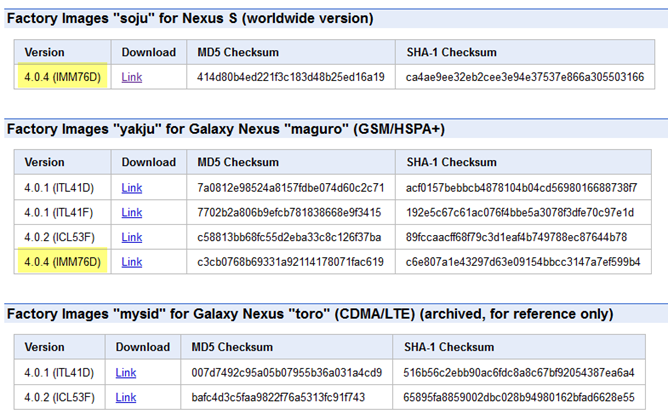 Auralux Poised To Hit The Tegra Zone In April, Bringing Together Osmos-Like Minimalism And ...