You have Android on your phone, tablet, and TV. But what about your car? If you're not only an Android fanatic, but a car stereo junkie, Clarion is serving up a fully loaded new car stereo system called the Mirage just for you. 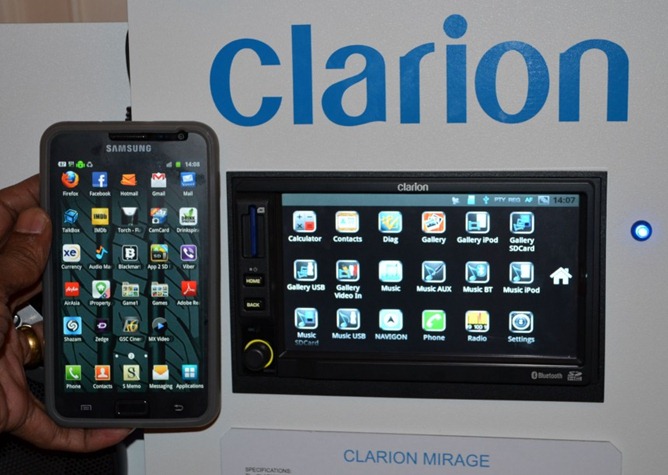 The Mirage is what Clarion calls a "smart car stereo" and boasts a 6.5-inch touch display panel, runs Android 2.2, and comes with Facebook and Angry Birds pre-installed (because Facebooking and playing AB while driving is a fantastic idea, and we need to promote this sort of behavior). Aside from its Android guts, the Mirage is an AVN-style double-DIN player with an SD Card slot, USB port, and Bluetooth. With all of these ports, there is one input noticeably missing: a CD disc slot. That's right, it's a car stereo that doesn't play CDs.

That's probably not as big of a deal as it sounds, anyway, since many users - especially ones who would want this player - probably tend to use their mobile device or MP3 player for the majority of their tunes. Oh, and all you iPod/iPhone fans out there, don't stress - just because this monster runs Android doesn't mean it's not iOS friendly. You should be able to plug your iOS device into the available USB port or use the Bluetooth connection to stream your music without a problem.

The system also has built-in GPS, radio, and the ability to display photos as a slideshow (again, there's nothing distracting about that).

If you're ready to grab your credit card and buy, however, you're out of luck for the time being - Clarion is marketing this unit specifically to car manufacturers. They're in talks with several different Malaysian and Thai manufacturers at the moment, so we could see this unit as an in-dash system fairly soon. If that does happen, manufacturers will be able to customize the unit to match their requirements, which includes adding vehicle telematics and readouts, reverse camera, steering wheel controls, a DVD player or changer, and more.

Partake In Some Self-Reflection With Google's New Account Activity Feature, Track Your Own Data ...