Prev
Posts in the last
24 Hours
sorted by
Hottest
Next
Registration is now open! Gogogogo!
Update 1: Academic tickets (for students) are now sold out.
Update 2: Looks like it's completely sold out now. That's a new record - 25 minutes (ish). Congrats to all who got a ticket!
Update 3: Vic Gundotra hit up G+ to let users who didn't get registered in time know that they won't be missing out on all the fun. We can expect all key sessions and the keynote to be streamed live, available for viewing after 24 hours, and Google I/O Extended viewing parties will be happening all over the world. Badass. 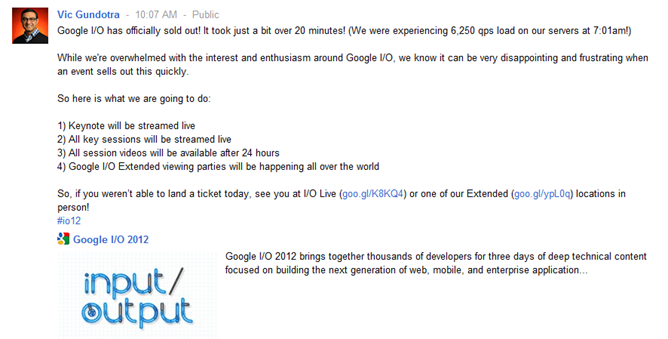 The day has finally come, folks - registration for Google I/O 2012, which is happening June 27-29 in San Francisco, opens today. If you plan on trying to catch an in, you better be on the ready at 7:00 AM PT on the dot, as this conference usually sell out double-quick. In fact, last year's event sold in less than an hour, and we expect the same of this year (if not less).

Entry fees will set you back a cool $900 each, which is double what it was last year. Of course, we expected a price hike this go around, as El Goog decided to make I/O 2012 a three-day event instead of just two. If my math is correct, that's one-third more awesome that ever before.

In order to register, you'll have to be signed up for both Google+ and Google Wallet, so if you haven't already done so, you better get on that before registration begins. Once you have that knocked out, hit the link below to grab your way in.

If you happen to miss the window of opportunity or the conference sells out faster than normal, don't fret - we'll be there live, so you can keep it locked on AP for all of the happenings at I/O 2012.

Verizon Unveils The LG Lucid, A Budget LTE Handset Without The Budget Specs