If you've ever dreamed of syncing your Android apps and games up with your PC and using them on a larger screen you'll be excited to hear that your dreams are becoming a very well-designed reality. Actually, if you've been following along with the development of BlueStacks then you know that this dream-to-reality transition has been in the works for several months now.

For those of you that don't know exactly what BlueStacks App Player is, it's exactly what the title implies - an app player that allows you to run Android applications on Windows (a Mac version is also in the works). It also has an extension of sorts available on the Play Store called BlueStacks Cloud Connect, which is an app that lets you pick and choose which apps you would like to sync from your Android device to your PC. In addition, it has a Push SMS feature that can deliver text messages right to your desktop.

We were quite impressed with the alpha release back in October, and now we're excited to take the beta release for a spin. Yes, that's right - the BlueStacks App Player beta went live today, and you can go grab a free copy of it for yourself right here. If you had the chance to use the alpha, you'll first notice that the beta has a completely revamped UI. On top of the new look, there are several new features. The most notable one of all is the ability to download apps directly from the desktop. Other new features include a huge increase in app compatibility (graphics intense apps and games like Angry Birds Space and Air Attack HD now work), a push SMS feature that shows you your texts via popup on the desktop, and accelerometer support. I have not seen where the accelerometer would be used, but we've been assured users won't have to hold their laptops up in the air to take advantage.

Before we go in-depth with BlueStacks I'd like to mention a few issues that we encountered during the installation of this beta release. First off, it seems that because BlueStacks uses virtualization, it won't run properly and may not even install if you have another program installed that also uses virtualization. So if you use virtual machines, then BlueStacks will probably give you some grief. In addition to that, if you have older graphics hardware you may only be able to download a limited version that won't allow you to run graphics intense apps and games. This, while rather unfortunate, isn't a huge deal because you'll still be able to use the vast majority of apps and games currently available. 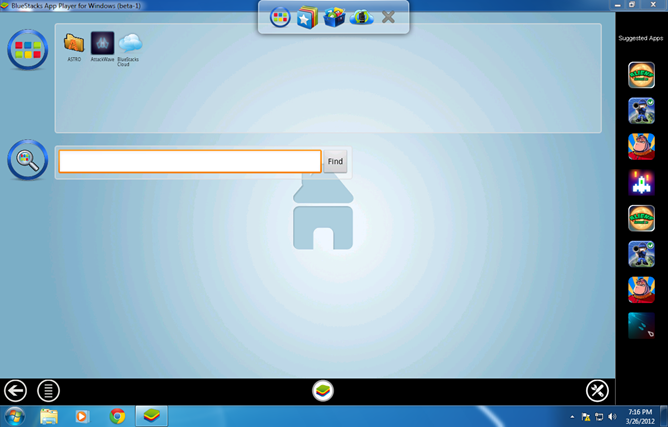 That being said, this beta release is absolutely fantastic. While I do find a few aspects of Android virtualization like this a bit useless and farfetched (more on that later), BlueStacks App Player really has some awesome things going on here. I mean, it basically provides you with a virtual version of your Android device to use from your Windows machine. What could be more perfect than that?

For the first time ever, you can download apps directly from your desktop. This is made possible by the presence of the Amazon Appstore, GetJar, and the 1Mobile Market. The Google Play Store isn't available, though, because BlueStacks hasn't received licensing permission from them. You can use the search feature on the Home screen to find apps and games, then BlueStacks will search for the download among all three app databases. Alternatively, you can select and launch an individual market from the dock near the top of your screen and browse through apps and games. If you want to sync the apps you already have on your Android device with your PC, you can do so with the Cloud Connect app available on the Play Store. 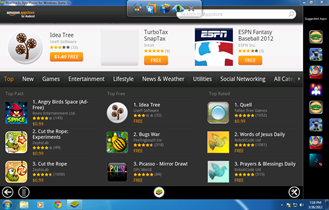 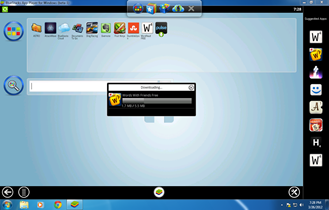 Your downloaded and synced apps will appear on your Home screen in the top panel, which is also where you can launch them from. After a bit of messing around, I finally started launching applications, and I must say that viewing many of these apps on such a large screen feels a bit liberating. The extra screen real estate is especially awesome for playing games. With incredible advancements in handset hardware, Android gaming has recently reached new heights and BlueStacks has taken it up even further from there. Some apps and games, however, don't scale correctly, but you can tweak them to look the best possible in the settings.

As I said before, some aspects of this seem a bit useless and farfetched to me. For example, BlueStacks advertises this app player (among many other things) as a way to check up on news or browse your social feeds, but why wouldn't you use the full featured resources available to you if you're on a computer? If I wanted to check the news, I would turn to the internet. If I wanted to browse Facebook or Twitter, I would go to their websites or use their dedicated desktop applications. Quite a few Android applications are limited and designed specifically for mobile use, so they're great on a phone or tablet, but you have much better options when you have your computer in front of you. With that in mind, there are definitely tons of Android apps that you won't find websites or Windows applications for, and BlueStacks allows access to them. In addition, some developers have the same apps available on Windows that are also on Android for much cheaper, so this causes a bit of a conundrum in that aspect.

Another sweet addition in the beta is the dock that appears at the top of your screen. When you close the actual BlueStacks application, the dock will remain and allow you to launch apps when ever you please. On the dock you'll find four different options:

The one unfortunate thing about the dock is the fact that it always hovers over other windows. You can hide the dock by clicking the X button, but that just basically minimizes it into a small icon that also hovers over all other windows.

While this feature was available in previous releases, it has since been enhanced and works pretty flawlessly. After you download BlueStacks on your Windows machine, you'll be prompted to register with an email address and your phone number. Then you'll be provided with a unique pin-number that can be used to make the connection between your Android phone and PC. After the two have been linked, syncing is a synch - all you have to do is select the apps you want to see on BlueStacks and hit the Sync button. In addition, a new SMS pushing feature has been added, which will push popup notifications of your texts directly to your desktop. As of now, it can only show you your texts, but reply capabilities are under development as you read this. 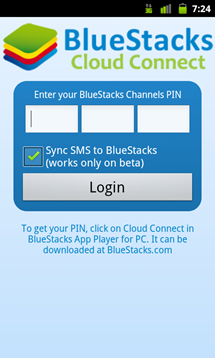 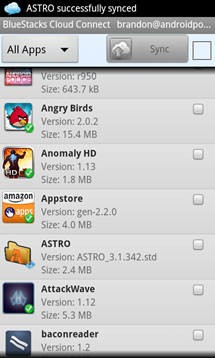 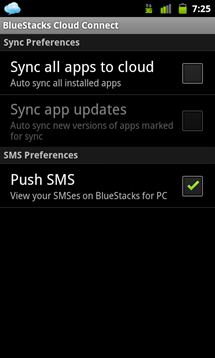 Aside from a few very minor complaints (and I can't put enough emphasis on minor), the BlueStacks App Player is insanely impressive. If you can get past installation issues that should only affect a small number of users, then you too will be able to see what enormous potential this has. If you're an Android fan and have never wished or hoped for a complete Android virtualization solution please raise your hand. Nobody? Didn't think so.

Oh yeah, you can go grab a copy of the beta for yourself completely free of charge over at the BlueStacks website. Unfortunately, it's only available for Windows user for the time being, but a Mac version should be on the way.

First Alpha Build Of Utter! Released With Limited Functionality, Goes By The Name Of (N)utter, ...

[Review] Temple Run (The Real One!) Finally Makes It To Android, Was Definitely Worth The Wait