It's no secret – the mobile interface for Google's Play Store could use some help. A recent comment thread on Reddit points to the fact that many users feel that the Play Store's interface is just a mess. Others suggest that its level of finesse just doesn't jive with Google's overall habits of design. While Google's recent "toolbar" overhaul resulted in a pleasing, easy-to-use interface which successfully unified navigation between all of the search giant's services, the Play Store (at least on phones and tablets) is messy, jumbled, and just feels disorganized. If you haven't examined the mobile interface in a while, let's take a look: 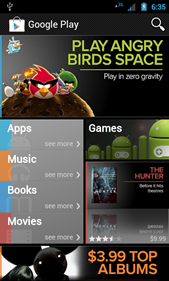 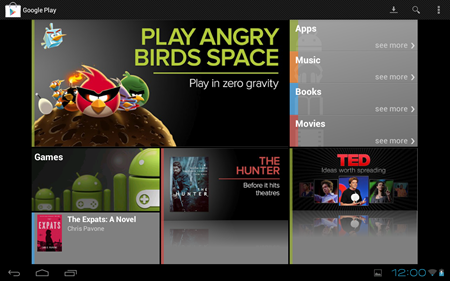 There are a number of issues that immediately jump out to me when looking at this interface. The first and most obvious is that the interface in no way connects with other official Google Apps, or the Android interface as a whole. Where apps like Gmail, Google Plus, and Books are all light, clean, and organized, the current Play Store is dark, cluttered, and confusing.

The next problem I notice is screen economy. It feels like the interface is trying to present lots of information, but it's my opinion that that goal is not being met. One of the primary culprits in the Play Store's misuse of screen space is the existence of those inexplicable gray tiles under some items (as Artem will attest), which each have a trite, gradated reflection. Every time a gray reflection tile appears, space is lost that could be providing users with something more useful.

Next, the tiled layout makes the whole interface look pretty hectic. From an artistic standpoint, I don't sense any natural movement, or any focal point. Even the giant, beckoning Angry Birds tile doesn't effectively draw my eye from the zillions of other tiles floating around.

Finally, clicking through Apps to a category like "Staff Picks," or navigating to an individual app listing takes the user to a light screen, totally inconsistent with the front page. This makes the experience feel disjointed, another characteristic you won't find in Google's other apps.

There are many more details to go over with the Play Store's current configuration, but we'll discuss those shortly. 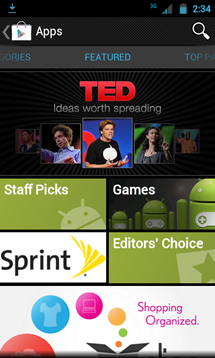 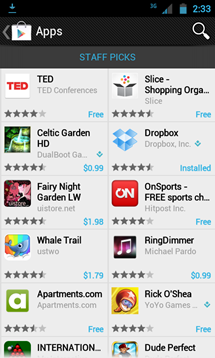 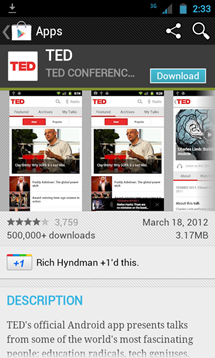 How To Fix It

While it's easy to stand back and poke holes in a design, many readers may be thinking "well, how would you design it?" Luckily, I've prepared an answer. After getting a generally positive reaction to my first mockup in the same Reddit thread, I decided to bring my ideas to this post. In trying to examine the issues with the Play Store's design, I've made several mockups of what I envision the Play Store should be. That being said, I'm definitely not claiming that my solution is perfect, just that it's one option to pull the Play Store together. Let's start off with the home screen (placed in lovely device renders, courtesy of Device Frame Generator): 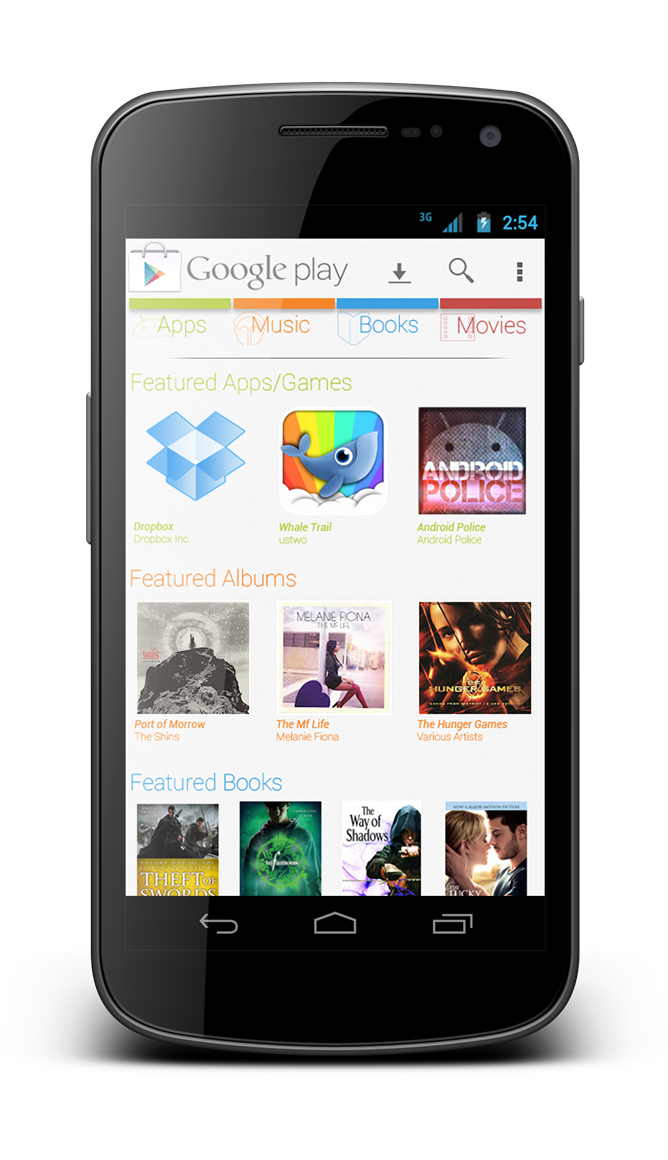 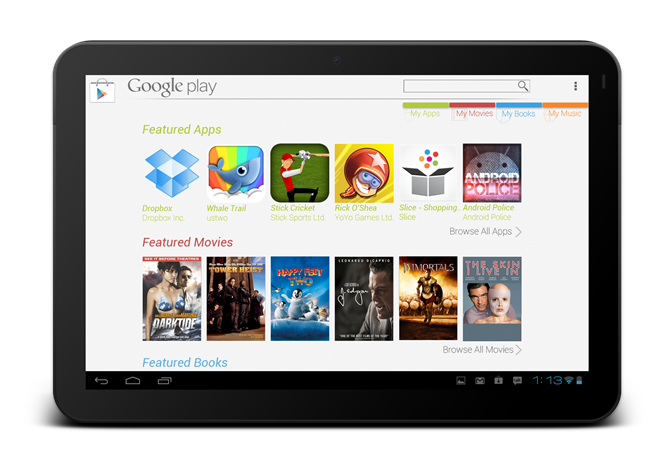 The first thing I wanted to do when creating a hypothetical Play Store design was make something cohesive. I wanted to focus on drawing the UI together across the entire app, and across all of Google's existing apps. In doing so, I tried to consider what the app would look like on a variety of screens. Specifically, I felt there should be a slight difference between phone and tablet interfaces, based on the primary foci of each device.

In my opinion, both a smartphone and a tablet should be multimedia devices, though actual apps are at the core of practical functionality. Phones, however, are more suited to small-screen multimedia – apps, music, and the occasional book. Tablets, on the other hand are great for apps, games, and  movies. For this reason, I made some adjustments to how "featured" items are displayed. I was also sure to create a menu for the tablet interface that  allowed users to access their multimedia in a similar fashion to the Play Store's relatively clean web interface. To avoid publishing a full-length novel about this hypothetical design, we'll primarily discuss the phone interface from here on out.

When coming up with this idea, I eliminated a lot of unnecessary visual elements. While the huge, domineering promotional tiles of the Store's current interface may have their own role, they aren't the most visually pleasing design element in the world. I also cut out many of the general feature tiles like "$3.99 Top Albums" and "Play The Hits" from the front page, to keep the page from scrolling on for ages with things users may or may not care about. I instead saved these general promotions for the front pages of the promotions' respective categories. That being said, I kept some elements around. For example, the "downloads" icon in the phone interface is persistent, making your downloaded items instantly accessible no matter where you are in the store. Likewise the search button sticks around, allowing users to search on the slightest whim. 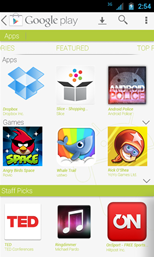 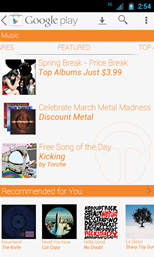 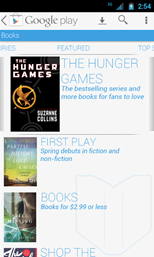 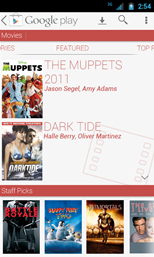 For each category's front page, I wanted to again focus on functionality. The Apps page is split into featured apps and games, and can be swiped (like the current store) to reveal other categories or top apps.

The Music page, likewise, can be swiped from side to side. On this page, however, I placed some of the general promotions I mentioned earlier, followed by a scrolling "recommendation" section, so that music suggestions would be conveniently located above the "fold."

The Books front page has a scrolling section of individually featured titles, followed by more promotions, allowing for a good amount of user discovery of titles that may otherwise go unnoticed.

The Movies page, similar to the Music page, ensures that more can be seen above the fold, making the individually featured titles section expandable, and placing a side-scrolling "Staff Picks" area just below.

Next came the "listing" pages, where users could view entries for individual apps, movies, etc. I wanted these to convey all the necessary information while maintaining the spacious, uncluttered feel of the rest of the hypothetical design. 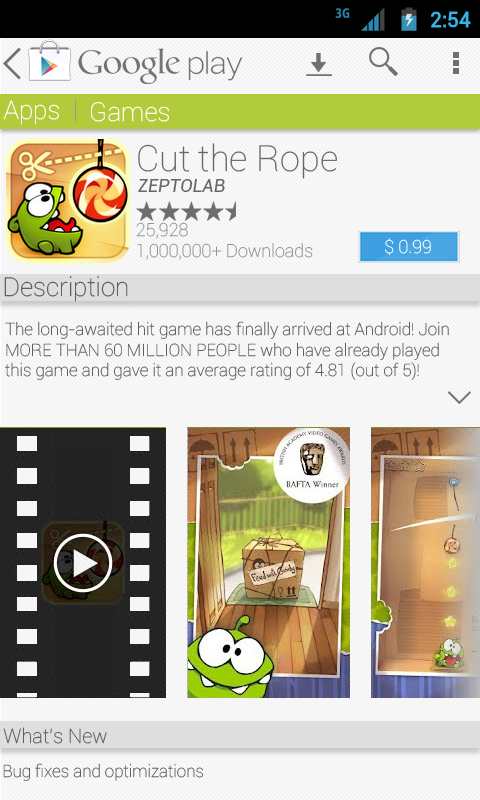 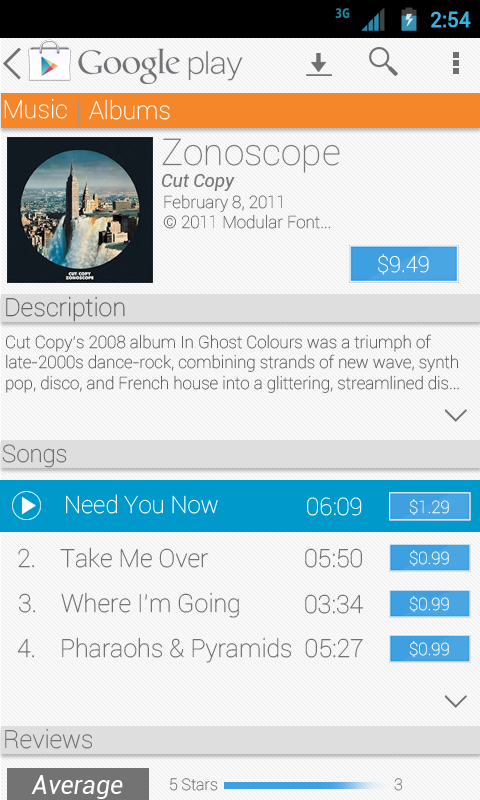 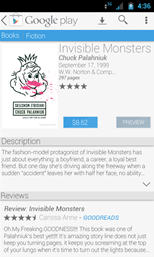 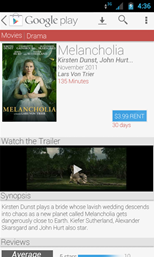 For app listings, I think it's important that the Play Store show the description, rating, and screenshots of the app first. The Play Store's current interface does this rather nicely, but its listing interface remains disjointed from the rest of the app. In creating a new set of listing interfaces, I wanted to keep things uniform, with subtle variations, again focusing on each category's respective functionality.

Music listings work in much the same way, except that the track list and description are significantly truncated, allowing the user to get to reviews faster, just beneath the fold.

Book listings are likewise simplified, focusing on the description and reviews, while Movie listings squeeze a trailer link and synopsis both above the fold, with reviews just below. A truncated cast list has also been added just below the title, with the full listing available below. Additionally, I repositioned the rental period just beneath the price in an effort to again convey useful information while eliminating as many unnecessary elements as possible.

Overall, I simply believe that Google needs to bring the Play Store's mobile interface a few steps closer to its web experience, unifying the aesthetic elements of the store with Google's signature visual style, and taking a better look at consumer research to understand what people might find important about each of Google's media offerings relative to the devices they are enjoyed with. I'm not at all suggesting that my hypothetical design is the ultimate solution to the Play Store's woes, but it is meant to present one way of doing some Spring cleaning and hopefully making some sense of the Play Store's jumbled user experience.

Angry Birds Space HD Is Finally Available In The Play Store For $2.99, But Honestly, Rovio, Why?

The King Of Fighters Android Lands In The Play Store, But It Only Supports A Fistful Of Devices ...