Let's be honest, there isn't exactly a shortage of Android apps. What there is a shortage of, though, is quality Android apps. You know, apps with great interfaces, support for new features (such as ActionBar), and formats (tablets, TV, etc.) Part of the problem could simply be that a lot of the people developing (cr)apps for Android aren't experienced developers... or if they are experienced devs, they don't know how to get the most from the OS. Luckily, Apress has just just updated one of their most popular books, Pro Android 4, which is written for developers looking to move into mobile - and to teach them the finer points of Android.

Apress was so impressed by everyone’s response that they’re offering an exclusive discount on Pro Android 4 to all participants. Use code DRP325 at checkout when purchasing the E -version of Pro Android 4 to save 40% off the original price. The coupon expires April 6th, so you have about a week to redeem it. 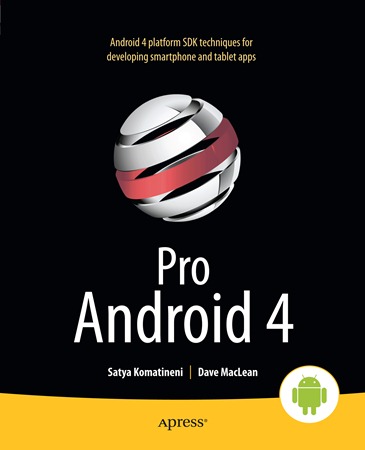 Pro Android 4 is written by Satya Komatineni and Dave MacLean, and spans  an astounding 1,020 pages(!).

Pro Android 4 shows you how to build real-world and fun mobile apps using the new Android SDK 4 (Ice Cream Sandwich), which unifies Gingerbread for smartphones, Honeycomb for tablets and augments further with Google TV and more.

This Android 4 book updates the best selling Pro Android 3 and covers everything from the fundamentals of building apps for embedded devices, smartphones, and tablets to advanced concepts such as custom 3D components, multi-tasking, sensors/augmented reality, better accessories support and much more.

After reading this definitive tutorial and reference, you gain the knowledge and experience to create stunning, cutting-edge Android 4 apps that can make you money, while keeping you agile enough to respond to changes in the future.

We've teamed up with Apress to give 10 copies of Pro Android 4 away. To enter, drop us a comment below and let us know what you're planning on making with the book's help. Note that you must include a valid email address in the email field of your comment so that we can reach you if you win. Winners can choose either a print copy or eBook. The contest is open to everyone in the world (internationally), and will run from today (Thursday, March 22) until Sunday, March 25 at 11:59 PM PST. Winners will then be chosen at random and contacted via email.

Acer Announces The Quad-Core A510 For The U.S. And Canada For $450, Now Available For Pre-Order