I hate the vast majority of rumors. About the only time I give a them any real consideration is when they're coming from a source that's highly reliable and they strike me as reasonable. It's for this reason I've stayed clear of the relative boatload of Galaxy S III rumors that we've been hearing for about a week now - first a potential render leaked (though we didn't like the looks of it). Next, an alleged Samsung employee leaked a photo of the SGSIII, then we heard a rumor that the device may feature inductive charging, and finally, we debunked a "leaked image" of the phone yesterday. In a nutshell: SGSIII fever is running rampant, and that's probably not a good thing.

Now that we're all up to speed, let's look at today's leak: some blurrycam shots of the Samsung GT-i9300. 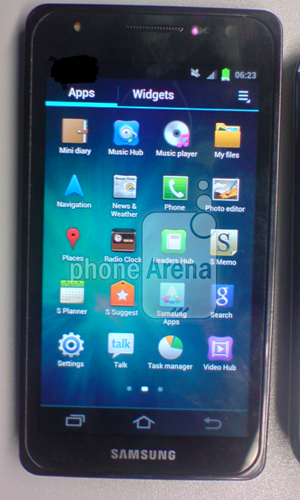 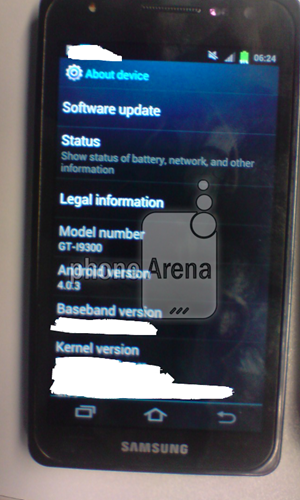 As you can see in the shots above, the model number is listed as GT-I9300, and it's running Android 4.0.3. Samsung's Netherlands support site actually lists the GT-I9300, and it's also found under the "Device" lists on the Samsung Russian and German Contact Us pages. Coupled with reports that Samsung was shooting for an international launch, these details lead me to suspect we're looking at a mid-range device rather than a flagship.

There are a few other details that make me doubt we're looking at the SGSIII. First, while the screen is large, we've heard (and believe) that the SGSIII will sport an uber-slim bezel; while the above shots don't show anything huge, it's also certainly not slimmer than we're used to seeing. It also just lacks a certain panache that previous Galaxy S devices have sported. While that may seem like a minor point, it's really not - you don't follow up to your best-selling smartphone ever with something that looks like a walkman/smartphone hybrid. Even the photo of the reported SGSIII from a few days ago showed a much sleeker device - while I still have doubts about that photo's legitimacy, it seems far more probable than this.

Oh, and we noticed that the i9300's on-screen buttons are in reverse order of what we're used to, though they do match the layout Samsung typically uses for capacitive buttons (which lends further legitimacy to the photos, not that it's needed). No real significance to that, just thought we'd point it out:

All that said, I doubt that the SGSIII will have a home button similar to the Galaxy Player 4.2 and the SGSII, given the company's lawsuits with Apple. Thus, it does strike me as likely that the SGSIII will sport on-screen keys. Then again, I don't really know much about patent law, so I could be wrong.

What do you think? SGSIII, or just a midrange device? Share your thoughts below.