No one is more tired of hearing the word "magic" applied to gadgets than I am. For the iFrogz Boost, though, I'm willing to make an exception. This device promises to amplify the sound coming out of "nearly any smartphone or digital media device" sans wires, Bluetooth, setup, or syncing. For once, in a parade of lofty promises coming from every corner of the tech sphere, a device not only makes a grandiose guarantee of convenience and ease-of-use, but actually delivers.

The Setup (Or Lack Thereof)

Step one: cut a hole in a box remove the Boost from its box. Step two: either plug it into a wall via a Micro USB charger, or insert three AA batteries. Finally, start playing a song on your phone and set it on top of the Boost. The Boost will immediately begin amplifying the music. Without any hyperbole or exaggeration, this device was amplifying Frank Sinatra's Fly Me To The Moon inside of 30 seconds after opening the box.

I've been conditioned by modern technology to be a skeptic. I don't expect to get the projected battery life from my devices, I don't expect that software updates will finally remove all of the bugs in an app, and I don't expect that any Samsung device will ever get a perfect GPS lock quickly 100% of the time. The Boost, however, is one time where the device lives up to its promise. 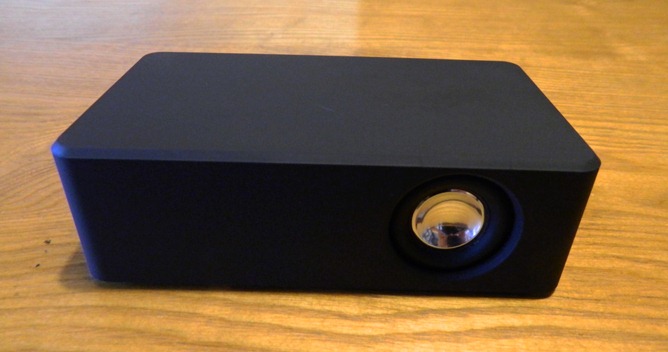 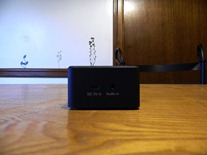 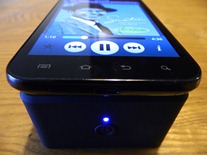 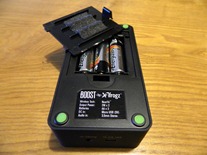 Upon first opening the Boost, you will find a black slab with two big speakers on either side. On the front, a power button, on the rear a Micro USB port and an auxiliary audio input. Underneath the device you'll find a battery cover where you can place three AA batteries if you so choose. The whole device (save for the bottom) is made of a rubberized plastic that makes it very easy to hold.

The whole device is very minimalistic. Save for the one button on the front, there is no method nor need for interacting with the device. The power button, true to its name, actually cycles through three modes: Off, Standby, and On. In "On" mode, the Boost will stay on for ten minutes without detecting any signal. If you place a device on it while in this mode, it will amplify the sound immediately.

In "Standby" mode, the device will remain active for one minute. During that time, it will wait to find any signal. If it detects an audio signal, it will activate the speakers. While it's not as immediate as the reaction in On mode, the delay is minimal, measured in fractions of a second.

The best part of this device, to put it simply, is the simplicity. (Har har.) As stated before, very rarely does a device work as well as its advertising says it does. The audio quality is very good. While we're still not sure exactly how NearFA technology works (the official explanation is "magic"), it seems to be more than merely a microphone echoing whatever it hears. This isn't professional audio amplification equipment, but it amplifies a wide frequency range. Bass sounds bassy, treble sounds trebley. If you've ever tried to format shift a piece of audio by recording the audible playback of a device, you can appreciate the difference in sound quality with this method.

Since there's no real setup required, either, it's extremely easy to switch devices. On more than one occasion while testing this device with every phone I could get my hands on, the situation quickly turned into "Hey, let me play this song." It's not difficult to imagine this device as the centerpiece at a party, everyone taking turns sharing whatever song they fancy. It makes sharing music in a group setting a very fast and very easy experience.

The one thing this device doesn't seem to be so hot at is distinguishing between a brief duck in the audio and the end of a song. Even in On mode, occasionally the Boost would stop amplifying the music if the volume got too low, be it from a pause, a transition between songs, or a bass drop. That being said, it required the volume be pretty low to trigger this minor flaw. Low enough that the phone's volume being set to maximum would be equally loud, so the only time you'd experience this effect is if you don't really need the Boost in the first place.

The one other minor gripe we have with this device is that there doesn't seem to be adequate protection over the speaker areas. The concave silver speaker covers can be pressed inward with very little pressure. We would prefer that there be some sort of firm grate in front of the speakers to ensure the user can't accidentally slip and jam a finger into the speaker. While you won't break it with a slight tap, it still feels less safe than one would like for a portable device that is likely to be passed around a group. 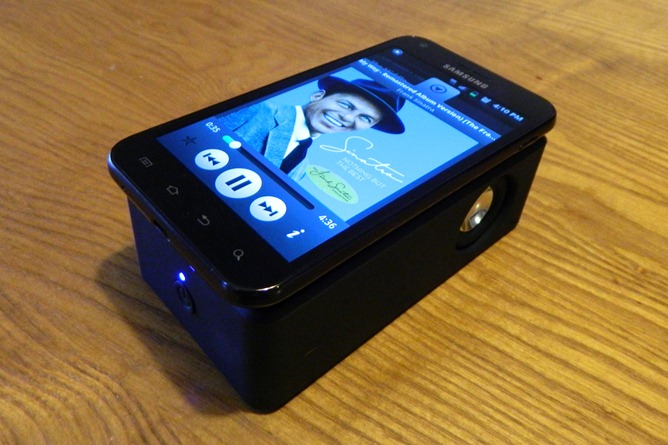 Even with the above minor issues, on the whole the device is fantastic. For $40, you get exactly what you're promised and what you pay for. This won't replace your home audio set up, or win any awards for best audio quality, but if you have a need for a portable amp for your phone and every phone around you, take a look at this device. The Boost is that rare device that promises perfect simplicity and actually delivers.