ErnCon, an awesome game with a strange name, reached version 1.0 today, officially "going gold." The game could be described as a mix between the classic 'Asteroids' and any entry from the chaotic "bullet hell" genre, with some interesting multiplayer capabilities thrown in.

ErnCon's description urges users to "join your allies in the epic battle to retake the galaxy," which could be paraphrased as "shoot everything and stay alive." When first starting the game, a nameless, busty guide will help you learn how to play in a quick tutorial mission. After the tutorial, players can choose to either shoot through Survival Mode or Missions. Players can also upgrade weapons, buy new weapons (including a variety of robots) or boosts, repair their ships, etc. in the game's store, using coins or gems collected during play (or bought through in-app purchase). Both of ErnCon's gameplay modes are basically what they sound like, but it's worth looking at each individually. 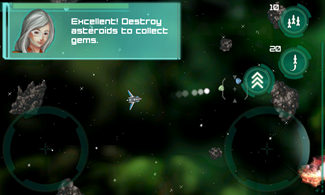 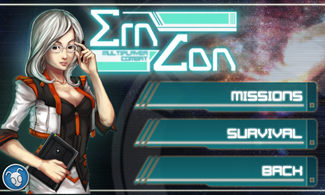 Before we get into ErnCon's gameplay options though, I want to mention that the game has social/leaderboard integration powered by Swarm, which is a relatively low-hassle  system that won't pester you to participate, but will assign a guest ID if you choose not to register. That being said, players can meet allies (and later play through missions with them) through Swarm, making it a meaningful tool in ErnCon's multiplayer functionality. 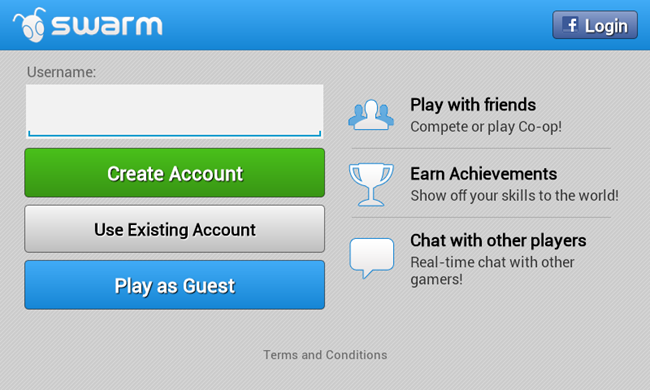 Survival mode is exactly what it sounds like, pitting the player against infinite waves of enemy ships. Scores are determined by just how long you can stay alive, and these scores also go back to Swarm for a handy leaderboard.

Survival Mode is a great option for quick pick-up play, and is made more fun by the fact that your weapons store purchases carry over, meaning players have a full arsenal at their disposal.

ErnCon's Mission Mode offers a series of unlockable missions, each with their own objectives and enemies. Players can battle with up to eight others in each mission, thereby "meeting" allies, which will be remembered in the Missions interface's "recent players" tab.

Generally, missions are "completed" based on time. Players will need to stay alive and shoot through as maI'mny enemies as possible for several minutes, before seeing a mission summary, which will award players coins, repairs, or powerups based on performance.

Something unique about ErnCon's Mission Mode is that missions are unlocked based on level, not on completion, so players may need to complete the same mission multiple times before progressing. This significantly elongates play time, but because of the somewhat chaotic, non-uniform gameplay style, things don't get boring.

Missions Mode gives ErnCon a certain sense of coherence, and fleshes out the implicit storyline a bit better. What's great is that each mission is only a few minutes long, meaning Missions Mode is also a great pick-up-and-play option to kill some downtime.

Overall, ErnCon is a genuinely fun action shooter, and can successfully kill a few minutes of your time. Its semi-retro graphics and basic, graspable gameplay style make for a surprisingly dynamic, successful combination, and considering the game is free from Google's Play Store, it's definitely worth checking out. As an added bonus, Woo Games is giving players $1 USD worth of free in-game coins to get started upgrading weapons and maintaining their ship. Just click through the widget below to grab the download.