Going on a tip received from within Sprint's Product Development division, S4GRU, a site pretty well connected with Sprint's insiders, has reported that the third largest wireless network in the US is aiming to get the Samsung Galaxy Nexus on shelves beginning April 15th.

The mid-April date has been rumored for some time now, as it coincides with the end of Sprint's Data Storm contest, and several WiMax device promotions which end on or around April 14th. You may remember that Sprint's Galaxy Nexus also just got through the FCC, making a not-too-distant release even more plausible.

Update: LG Viper is also supposed to come out on the same April 15th date. 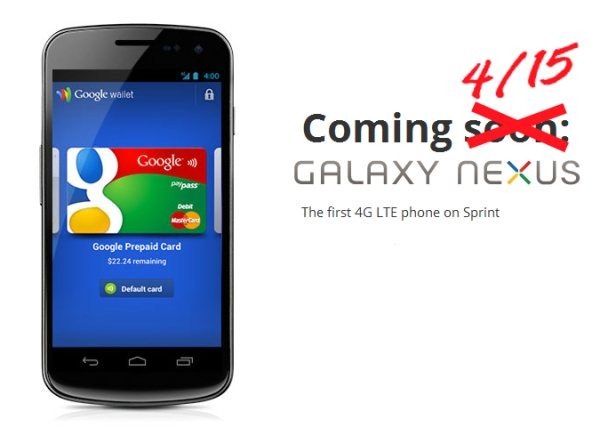 S4GRU also notes that while Sprint's Galaxy Nexus won't have LTE turned on by default (due to the network's as yet limited infrastructure), the device will fully support eHRPD, a protocol which allows the phone to switch back and forth between 3G EVDO and 4G LTE connections seamlessly.

Of course for now, the proposed release date is still a rumor (albeit a slightly more credible one, coming from S4GRU) but we'll be here to report on any new details surrounding Sprint's Galaxy Nexus as they emerge.