Those of you from the early days of Android may remember App Inventor - a Google project that allowed people to create apps for Android by dragging and dropping bits of code - no programming experience required. More recently, Google transferred the App Inventor to MIT, where it was open sourced. But the App Inventor (AI) is still a bit tricky to just open and jump right in to - a proper guide through the AI would allow someone to utilize its full potential, and create more complex apps in less time.

Luckily, our friends at InformIT have such a guide - and we've got 10 copies to give away. 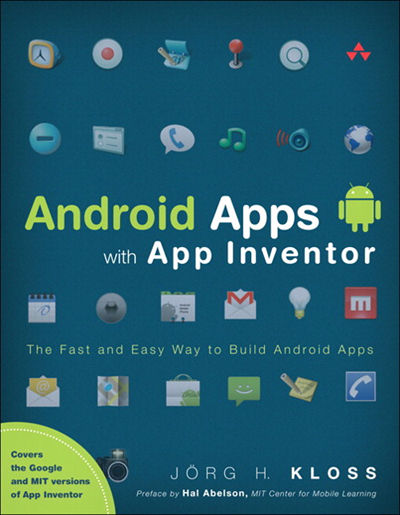 With App Inventor, a free visual development system, practically anyone can create robust, modern apps for today’s newest Android smartphones and tablets without any use of Java. Now, there’s a start-to-finish guide to App Inventor for everyone: working developers and non-programmers alike. Both an easy tutorial and a reliable reference, Android Apps with App Inventor provides hands-on walkthroughs that cover every area of App Inventor development, including the Google and MIT versions of App Inventor.

Kloss begins with the absolute basics of program structure, syntax, flow, and function, and then demonstrates simple ways to solve today’s most common mobile development problems. Along the way, you’ll build a dozen real Android apps, from games and geotrackers to navigation systems and news tickers. By the time you’re done, you’ll be comfortable implementing advanced apps and mashups integrating realtime multimedia data from all kinds of Web services with the communication and sensor-based features of your smartphone.

Entering is, as always, quite easy. Just drop us a comment below and let us know what kind of app you'd like to create with the App Inventor. Most crucially, you must include a valid email address in the email field of your comment so that we can contact you if you win. Winners can choose print or eBook, whichever they prefer. The ten winners will be chosen at random from the valid comments below, and contacted shortly after the contest ends.

The contest is open from now (Wednesday, March 14) until Sunday, March 18 at 11:59 PM PST. It is open to residents of the following countries:

THE UNITED STATES, CANADA, MEXICO, CHILE, AUSTRALIA, NEW ZEALAND, SINGAPORE, INDIA, FRANCE, BELGIUM, THE UNITED KINGDOM, LUXEMBOURG, GERMANY, AUSTRIA, SWITZERLAND, SWEDEN, FINLAND, DENMARK, NORWAY, SPAIN, IRELAND, RUSSIA, THE NETHERLANDS, SOUTH KOREA, SOUTH AFRICA, TAIWAN, ITALY, PORTUGAL, SLOVENIA, ESTONIA, LATVIA, LITHUANIA, ROMANIA, SLOVAKIA, MALAYSIA, VIETNAM, THE PEOPLE'S REPUBLIC OF CHINA, THE CZECH REPUBLIC, CROATIA, THE UKRAINE, POLAND, BULGARIA, AND HUNGARY WHICH ARE: (i) OVER THE AGE OF MAJORITY IN THEIR COUNTRY OF RESIDENCE ON THE DATE REFERENCED BELOW AS THE START DATE FOR THE CONTEST; AND (ii) WHO ARE NOT RESIDENTS OF THE STATE OF RHODE ISLAND IN THE UNITED STATES; THE PROVINCE OF QUEBEC, CANADA; OR RESIDENTS OF THE AUSTRALIAN STATES OF VICTORIA, QUEENSLAND OR THE AUSTRALIAN CAPITAL TERRITORY

[Hands-On] Tablet CPU Usage Monitor Updated With Support For Quad-Core Devices, And It's ...

Archos Adding The G10xs Line To Its Tablet Assortment, Will Include A Keyboard Dock And Super ...