If you've never heard of Mika Mobile, that's not a huge surprise - they're a small, but fairly successful mobile game developer that focuses primarily on iOS. Their number one title (in terms of recent sales) is Zombieville USA 2, which has over 68,000 ratings on the App Store, and the most recent version of the game has averaged 5 stars. So we're clear, that's no small feat.

Their first game, Zombieville USA, was released for Android last July. I reviewed it and, frankly, wasn't a big fan (particularly because the first release seemed plagued with bugs). It's a relatively mundane time-killing side-scroller in which you button-mash zombies to death with a variety of weapons and characters. Of course, the iOS version of the original Zombieville came out around 3 years ago, so by the time it reached Android it wasn't exactly the visual or technical pinnacle of mobile gaming. Looking back 3 years, though, I can see why it was so popular. 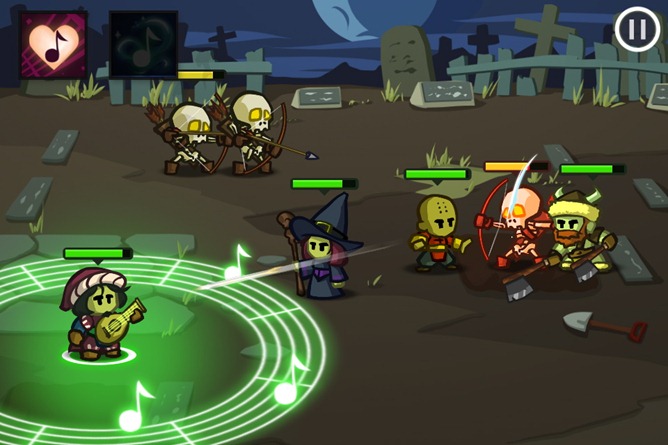 Mika's most critically lauded title, though, has been Battleheart; a simple but highly addictive action RPG. And it hasn't been updated on Android in 8 months. Why? Because Mika is tired of tailor-fitting it to a myriad of GPUs, OS versions, and other device-specific factors. In fact, Mika is so distraught with the difficulties of developing for Android that it has decided to halt all of its Android endeavors indefinitely, with no apparent plans to return. And yes, the announcement is a little on the dramatic side - perhaps a little too dramatic.

And so, your first response may be "So what? Their loss." Don't be so hasty - Mika makes some compelling points about the difficulties of cross-platform development, and the weaknesses of Android as a content distribution platform (Market/Play - whatever you want to call it), particularly for paid apps.

The bottom line is that the return didn't justify the investment. Mika says it spent 20% of its total development time last year on the process of porting two of its games to Android and then tweaking those titles for individual devices. It could never even get Battleheart to work on Galaxy S phones, because they can't download .apk's larger than 30MB with stock software. For all the months of "thanklessly modifying shaders and texture formats to work on different GPUs, or pushing out patches to support new devices without crashing, or walking someone through how to fix an installation that wouldn't go through," Mika claims it never made a profit off either of its Android games.

In fact, the company's revenue in the last year is split at a startling 95/5 - you can guess which one is Android. But Android is growing, right? So that percentage should be going up, yeah? It's not. In fact, it has actually started to go down. While that's very understandable when you don't update your titles for over 9 months, given the exceeding popularity of Mika's games on iOS, you would think Android could provide renewed interest in some of its older titles. But it hasn't.

Back in 2009, Zombieville USA had already racked up over 500,000 paid downloads in the App Store, and over a million for the free, ad-supported version. Since then, Mika has released 3 other titles (Zombieville 2, OMG! Pirates, and Battleheart).

Still, Mika claims that based on time spent, testing hardware, and other costs that it still managed to lose money on Android. I'm not quite buying that. Mika Mobile is also the definition of a small developer - the entire company is composed of two people, a couple. And while it is their full-time endeavor, based on these napkin-math revenue projections, I seriously doubt they're hurting because of the time they "wasted" on Android. I do wonder how they value their "time," as well - if they consider themselves worth $500 an hour, then yes, maybe they "lost" money.

But was it a smart business decision to port their titles to Android? From a time/money perspective, maybe not - and I think this is more what they're getting at.

To Port Or Not To Port

I don't want to veer off too far on that tangent, because Mika still raises some clearly valid concerns about releasing an app on Android from the I'm-running-a-business-here standpoint.

If you're someone like Gameloft, Rovio, or EA, these aren't problems you really care about as much. You throw man-hours at the porting process, or just develop the iOS and Android versions simultaneously to avoid some of those later headaches in the first place. Sure, you might not even turn a profit on the Android version, or the profit may not be significant enough to get excited over, but you're getting your foot in the door. And who knows, maybe Google will do something revolutionary and get everyone on Android excited about buying apps all of the sudden. Or not. But the point is this: you develop for Android because it's like the gamble you can't turn away from - one day, maybe, you'll strike it rich with that massive user base. And you can't do that by ignoring it.

It seems Mika, though, has decided it has spent enough time looking for its breakout Android product. And don't think Mika's experience is unique, either.

While at MWC, we spoke to a developer of a very high-profile iOS / Android game that has been extremely well-received by users on both platforms (we don't have permission to divulge which developer). In no uncertain terms, he said that developing for Android alone would seemingly never be a possibility. Without iOS, the company as a whole would not be financially viable. Still, he said developing for Android brought the company "some" profit (though not much), but that iOS was without a doubt the real breadwinner.

He went on to discuss the many headaches of developing for so many different Android devices, and how it resulted in the quality of gameplay on Android as a whole being lower than that of iOS. These are particularly pertinent issues for game developers, for whom the fluidity of the user interface and controls are absolutely paramount to the reception of their product. Getting these things right across a gamut of devices, as opposed to a few (whatever the last 2 generations of iPhone and iPad are), takes time and effort, and inevitably results in some compromises.

For Mika, and other small developers (particularly indie game developers), the problem is compounded by the physical limitations of what can be accomplished in a limited time frame. Do you spend your time porting your title to Android and debugging so you can get it up and running on the majority of devices, or do you just say "screw it" and spend that time polishing and developing better content for the iOS title you know has a far greater chance for profitability? Or, better yet, do you just move on to your next game that you're probably way more excited about in the first place?

It's not hard to see why developing a paid title for Android might be discouraging, especially a game - getting exposure in the Play store (any app store, really) is difficult, there are dozens of popular devices out there to support (along with various OS versions), and Android users are generally much less likely to pay for apps in the first place. It's not exactly a friendly atmosphere in that regard.

Foremost, Google Play and its accompanying executive shuffle should do something to make Android more attractive for these cross-platform ventures. Apparently Andy Rubin actually considered the content arm of Android a "secondary" concern to device activations and search ad revenue - which is a bit befuddling to me. Without good apps, a smartphone is pretty worthless, and I think Google should definitely be doing more to encourage and make it easier for developers to bring their ideas to Android, as well as to expose them to end users. Let's face it, the on-device Play Store is an absolute mess to navigate unless you know exactly what you're looking for, or want to buy an app that's been on the "Editor's Choice" list for the last 6 months.

And you're not off the hook, either, manufacturers - making good on those promises to cut down on device releases would make a lot of developers happy, too. And maybe you should all finally decide on a display resolution that you can actually stick to for a while.

I think we can all agree, Mika Mobile leaving Android isn't a sign of some impending indie-game-developer mass exodus. But it is a clear indicator that straddling the iOS/Android fence can cause more problems than some companies may be willing to deal with at this point - practically and financially. The last thing any of us want to see is Android be a bar to the entry of good ideas, or worse yet, causing those good ideas to leave. Let's hope that the Google Play rebrand/restructuring and more focused product cycles from handset makers will provide some much-needed certainty in the coming year for those creative and intelligent people we should all try to make life easier for: developers.

Want To Customize Your Galaxy Nexus Without Adding Any Extra Bulk? Check Out These Super-Sick ...

[For Real This Time] Samsung Galaxy S II Is Getting A Really Real ICS Update In Some European ...