Straight from the horse's mouth and not yanked within minutes this time, Samsung has announced that an ICS update for the Galaxy S II (international variant) will be rolling out today throughout European markets including Poland, Hungary,  and Sweden, and also in Korea. The update will "gradually roll out to other markets." 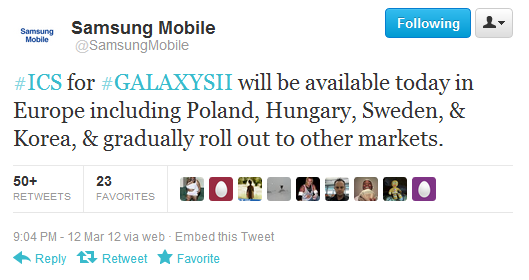 Of course, most of our readers are in the U.S. and, as you're probably used to hearing by now, "other markets" includes you and "gradually roll out" means "we'll get to you when we get to you". While U.S. Galaxy S II phones are based on the same hardware, there are some key differences that mean the update will take a little while longer. To say nothing of having to go through the individual carriers for testing. Still, another day, another step closer.

If you're in one of the markets listed above, or anywhere else in Europe for that matter, feel free to start checking the update section of your phone every five minutes until you finally get the update. Don't forget to let us know what you think in the comments!