The first plan, Essential, starts at £15 and provides customers with a choice of 100, 300 or 500 minutes per month as well as a 250MB data allowance. The idea behind this tariff is to stop bill shock, as your data will be cut off automatically when you reach your monthly data quota. If you'd like to purchase more data, you can choose to pay an additional £2 for a further 250MB or pay £5 extra for all-you-can-eat data for the rest of the month, which doesn't have any fair usage policies applied to it.

As you will be notified and restricted when you reach your data limit, there isn't any chance that you can continue to browse the internet and go over your quota, so you can say goodbye to unexpectedly large bills. At least for as long as you remain in the UK.

The second plan that has been introduced by Three is the new Ultimate plan, which takes the all-you-can-eat data that was previously confined to The One Plan and extends it to a cheaper tariff. Starting at just £18, the Ultimate plan allows customers to choose from 100, 300, 500 or 1000 minutes and both of these tariffs will allow you to send 5000 SMS messages every month. Thomas Malleschitz, marketing director at Three said

These new plans see the end of out-of-bundle data charges. Three is built for the mobile internet, it’s at the heart of everything we do and that’s reflected in these new plans. Mobile internet usage is continuing to increase at lightning speed, customers are beginning to prioritise data and they rightfully expect their network to allow them to do so without hitting them with extra charges.

All of the phones which are currently available with the new tariffs are shown in the grid below. Of course, when new models are released they will also be added to these plans too. It's great to see Three pushing all-you-can-eat data on their cheaper tariffs as well as the more expensive One Plan; hopefully other carriers will start to follow suit in the future, but I wouldn't hold your breath just yet. 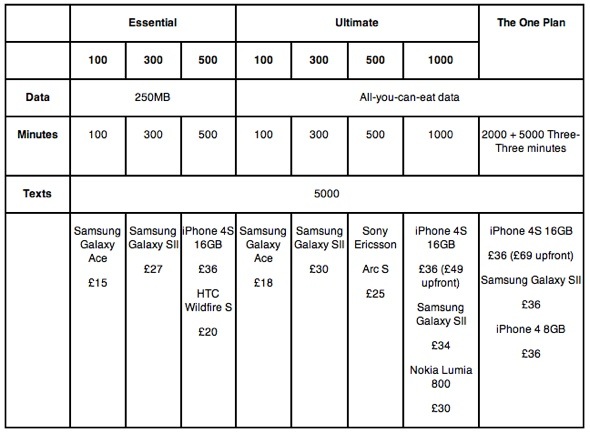 H&R Block At Home 1040EZ Lets Enter Your W2 Info With A Photo, Has A Needlessly Complicated Name