In the past, Android apps have been limited to a 50MB file size. App developers who needed to add extra data, as is the case with most big games, would have to have a secondary, self-hosted download after the user first launched the game. Today, that changes with Google introducing support for up to 4GB of "expansion files". While APKs must still be under 50MB, Google will host two 2GB files that include extra data for developers' apps. Nice!

This will solve a lot of problems for a lot of people, not the least of whom are developers. Since Google is doing the hosting, it's no longer necessary for a game developer to host hundreds of megabytes, or even gigabytes of data on their own servers. Server costs can get huge if you have tons of people downloading your giant game every day, so this will surely be a blessing to large and small developers alike. 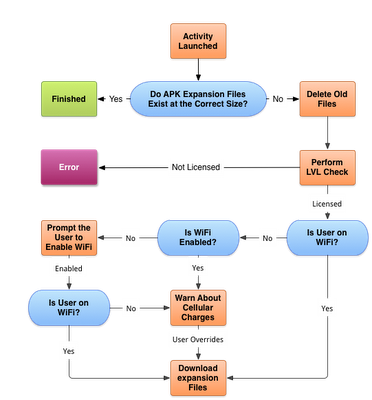 Additionally, now the 15-minute refund window won't start until the expansion files have finished downloading (read: the end of that flow chart above, not the beginning like it's been this whole time). Since huge downloads can easily eat up that short refund window even over WiFi, this should help eliminate one of the biggest sources of refund window complaints.

If you're a developer, head on over to the Android Developers Blog at the source link below for more detailed instructions on how to implement this new functionality into your apps.

Update: As has been pointed out in the comments, Google announced this functionality back at I/O 2011. According to the announcement, this functionality should've been available in June of last year. It looks like Google just took its sweet time implementing the service until now.