You may remember way back in 2010 when Samsung first demonstrated a new flexible display technology, wowing onlookers and begging the question "what's the application?"

Well Richard Windsor, a senior technology analyst at Normura Group, has answered that question, indicating that Sammy plans to include foldable displays in future devices. Specifically, Normura's Asian analysts have indicated that the manufacturer is expected to use foldable display technology to entirely eliminate the appearance of side bezels around a smartphone screen. The analysts added the display would be unbreakable, would enhance "the exceptionally thin form factor," and will debut some time in 2012. 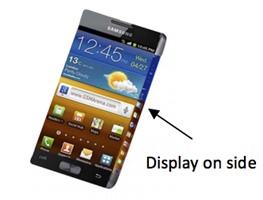 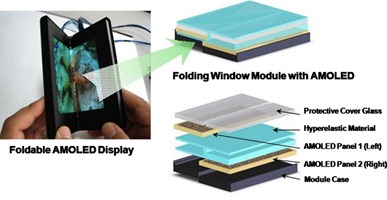 Left: Mock up of rumored bezel-less smartphone. Right: Diagram of folding clamshell display like the one Samsung demoed at FPD 2010 (Credit: Forbes and PhysOrg)

The displays would evidently be based on a plastic substrate, making them lighter and thinner, and adding to the flexible display's inherently unique design requirements. While the practical application of flexible display technology may sound like something customers will have to wait years for, Normura's analysts give a bit of hope:

We expect Samsung to mass produce such panels for smartphones in 2012, which we believe would be more popular that the current OLED display equipped in SEC’s Galaxy S II … Plastic displays will change the perception of handsets and tablet PCs in terms of design, thickness, and weight, and this would clearly differentiate Samsung’s products from others, in our view. This is why we like Samsung.

The fact that foldable displays are very close to being in the hands of consumers may not be a surprise to some, though. Samsung has been very open about the technology, publicly writing in its corporate profile that the manufacturer is "striving to brighten the future with next-generation technologies such as foldable, flexible, and transparent displays," and showing off a foldable prototype last year.

Next to nothing is known about when we may actually see this technology in a smartphone, but you can bet we'll be here to report on any new details that emerge going forward.

[New App] OverSkreen, From The Creator Of AirCalc And Stick It! – A Floating Browser With ...