The first update since November to both tablet and phone variants of the official YouTube app arrived today, bringing the Android 3.2+ compatible version to v3.5.5 and the versions for other devices to 2.4.4. The changelog seems to indicate that both of these received multiple bug fixes as well as the ability to sign in with a Google account. In addition to that, the version for older devices (2.4.4) received HD playback:

This update is confusing and irritating for a few reasons.

First of all, I was already able to sign in with a Google account long before the update. After updating, I couldn't see any changes to this behavior, which left me dumbfounded.

Update: Dan wrote in to clarify:

It actually is a subtle change: prior to this update, one could login only if the google account was already tied to a Youtube account; with this change however I can login with my google account even if I don't have a channel on youtube (nor have a nickname there), allowing me to follow my subscriptions directly on the Android app.

Secondly, how is HD playback different from HQ playback that was already in place? I tested on the EVO 3D, and saw the same HQ button. I'm pretty sure it's a perfectly capable phone (the changelog states I should have one), so what does HD mean compared to HQ? Are there even more geebees packed in there at a higher resolution? One could only guess. Every single bullet point in the changelog is as ambiguous as it gets.

Update: It's more than likely that by capable phone Google means having a 720p or higher resolution display. That would make sense - lower-res screens wouldn't benefit from 720p videos - the next level down, 480p, should be sufficient (presumably that's what HQ means).

Moving on, the YouTube app is still not available for the Epic 4G Touch SGS II. Or the Tab 10.1. There is not a single valid excuse for this - both of them have versions of the app already installed that aren't that much different from what's in the Market. Heck, until today both the EVO 3D, which is compatible, and the Epic Touch, which isn't, were running the same versions 2.3.4. Forgive me for being harsh, but that is bullshit, Google.

Update 3/15/12: YouTube is now compatible with the Epic 4G Touch. The version of the app was not bumped, so it was just a flip of a switch in the backend. 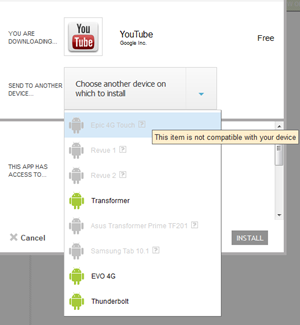 And finally, there's the fact that since the YouTube app is pre-installed on most Android devices but not actually linked to the Market, you may never even know there is an update. Not unless you check anyway. When you do, you'll see 2 options to Update or Open, without the ability to uninstall (you can't uninstall system apps without root). Once you update, the app will finally be tied to the Market, and you should receive notifications of subsequent updates. 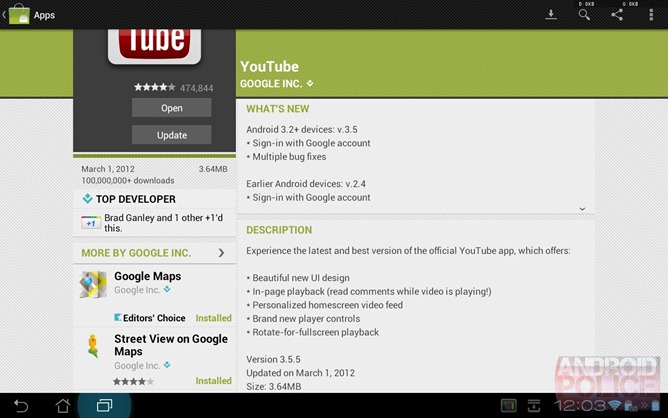 GO Launcher Team Enters The Tablet Launcher Arena With GO Launcher HD Beta, And It's Off To A ...