OnLive, the company that has already revolutionized gaming is now gunning for making the same kind of splash in OS virtualization. And not just any OS virtualization, but Windows 7 in the cloud, for free - a set of words I never thought I'd write in the same sentence.

Something worth pointing out right off the bat is OnLive's "groundbreaking video compression technology" that is used to stream the Desktop cloud to your tablet. If there's one company that has figured out how to perfect streaming of full-screen media, it's definitely OnLive.

I was a bit skeptical at first, but after trying out every aspect of the app through a relatively slow, Spanish Vodafone HSPA+ hotspot here in Barcelona, I have to say I'm thoroughly impressed. Let's have a look, shall we?

There are a couple of Onlive Desktop plans/levels, all of which I will discuss below. You can also read about them here.

OnLive Desktop Standard, available in the Market for free, is an Android tablet application that connects you to a Windows 7-based cloud hosted by OnLive (at no point do you need to set up your own instance of Windows at home or office), preinstalled with a set of full desktop applications, such as (all made by MS unless otherwise noted):

You also get 2GB of cloud storage on OnLive's servers for free. Thus, you can save files in the cloud and have them instantly available for download through OnLive Desktop's website. From what I can tell, PC and Mac applications are coming in the future, but for now, you have to log into OnLive Desktop online and download or upload from there.

If you have sound/music and video files, they stream right through the app as well, which is a nice touch considering many similar VNC apps don't support media like that.

Of course, a company like OnLive has to  make money somehow. The Plus upgrade, which is a $4.99 monthly charge, adds: 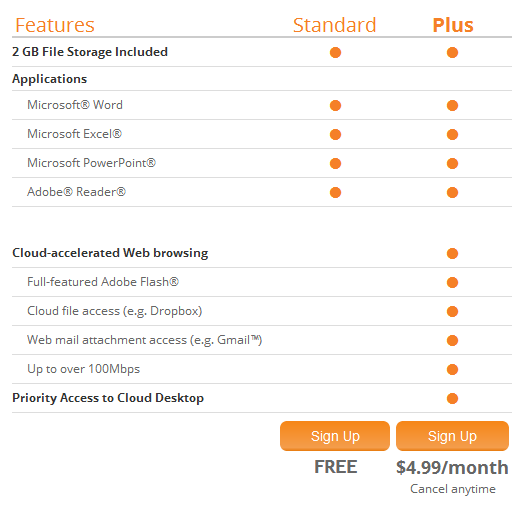 There are 2 more levels of accounts - Pro and Enterprise - but they're not yet available.

The Pro version will start at $9.99/month and include 50GB of cloud storage instead of 2GB as well as the ability to install custom, whitelisted PC applications.

The Enterprise version will offer IT-managed OnLive Desktops and other customizations that businesses oftentimes require.

Live desktop sharing, including voice chat, is coming to Pro and Enterprise accounts at some point in the future. Definitely something to look forward to.

So, how well does OnLive Desktop work, what kind of beast is it, and who is it useful for?

After installing the app, you're presented with a login screen for your Desktop cloud account. I registered at http://desktop.onlive.com/signup and put in my username and password, after which I was almost instantly greeted with a Windows 7 desktop. Note how if you exit to the tablet's home screen, OnLive Desktop continues to run: 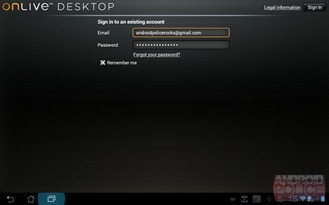 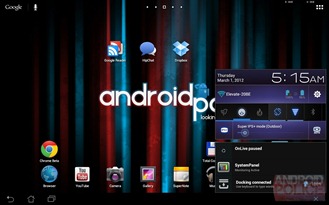 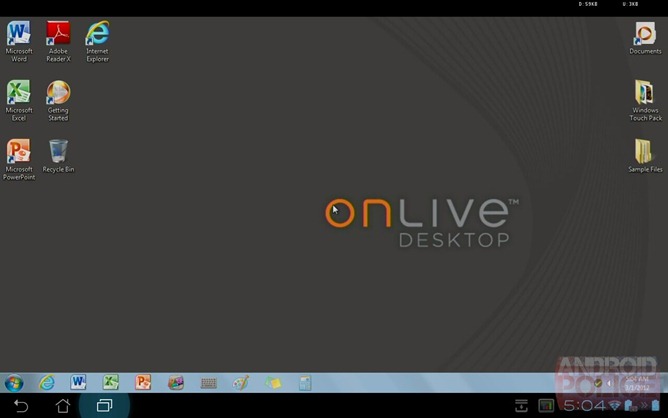 Whoa, that was actually pretty cool. Note that with OnLive Desktop, I didn't log into one of my own machines, but rather a special Cloud version of Windows 7 with a bunch of pre-installed apps. Everything is happening in the cloud at this point. When you log out and log back in, your instance is exactly as you left it. Go ahead, try it.

At this point I tried Word, Excel, PowerPoint, the browser (IE), Paint, Calculator, and media streaming. Everything worked, albeit with a bit of completely expected lag, considering I was on a 3G connection in the middle of nowhere on the outskirts of Barcelona. OnLive recommends you have at least a 1Mbps connection (1.5Mbps+ is recommended) and actually doesn't let you log in if it's too slow. I'm sure it works great on broadband.

If you don't have a keyboard dock handy, you can pull out a special virtual keyboard built right into Windows at any point.

Let's play with some apps now. 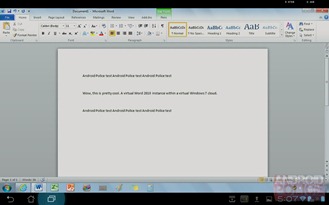 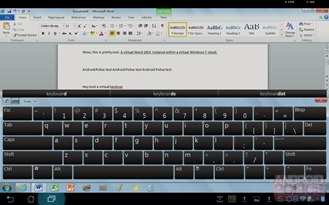 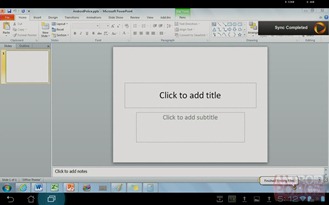 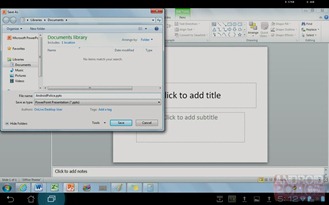 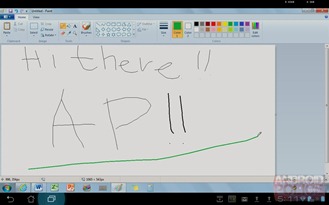 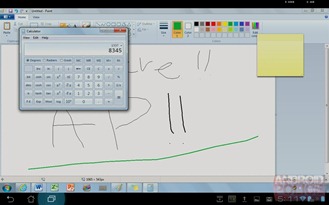 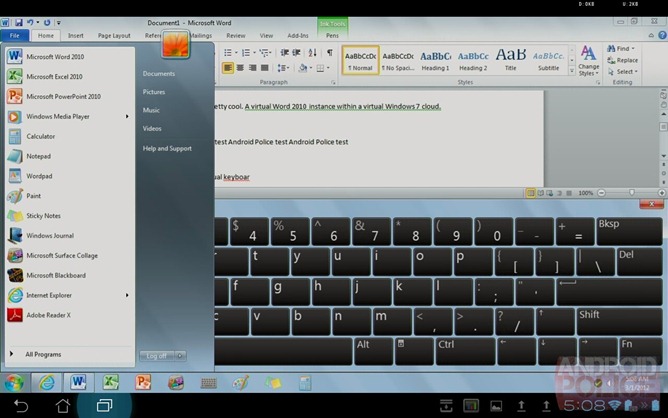 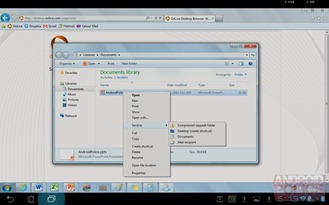 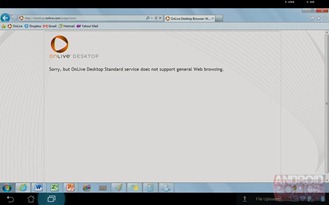 I also tried a few other programs, like Math Input Panel, as well as games, and they all worked perfectly. OnLive has created quite an enjoyable experience and did an absolutely bang-up job with the Android app. I found 0 bugs so far, and I don't foresee finding any.

You may have noticed that I saved my PowerPoint presentation and a Word document, but what happened to those files? If you were attentive, you probably saw the "Sync Completed" message on one of the screenshots. Here it is again: 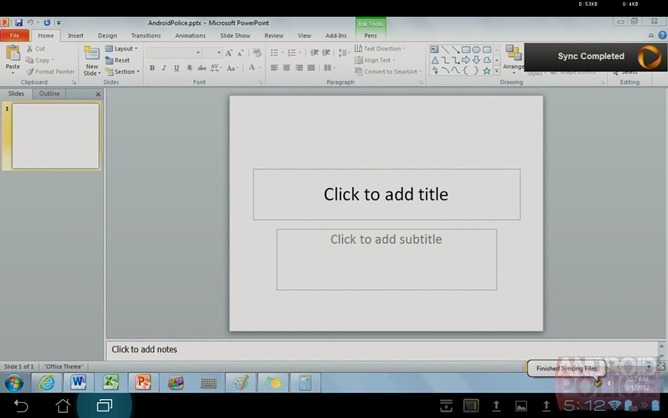 Turns out that the files that live in the cloud are automatically synced to OnLive's storage servers (remember, you get 2GB of that for free) and are then available from the online file portal. You can download, upload, rename, and delete files from there, and everything will get synced to your cloud instance: 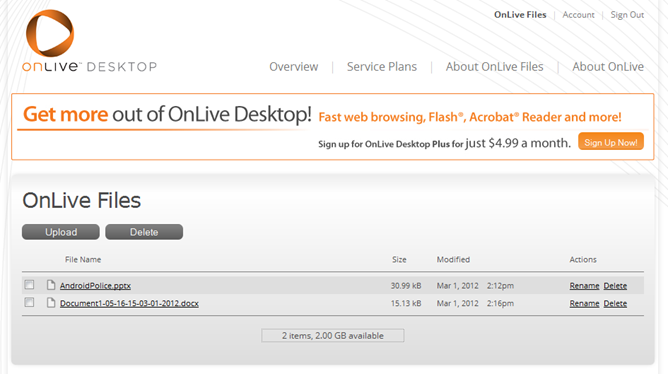 I haven't figured out how to actually download or upload files to and from the tablet itself yet, and I'm not entirely sure it's possible at this point, but it seems like a fairly reasonable feature to expect in the future.

OnLive Desktop works great, but who is it going to be useful to? In order to answer that, let's recap what it manages to accomplish first.

What you get is a slimmed down and very simplified version of Windows 7 in the cloud. There is no device management to worry about, no physical hardware, no instrumentation - just log in and use it, let other folks worry about stability.

The standard experience is free - you only pay monthly for advanced features, like full browsing and Dropbox access. The most notable free feature is, without a doubt, the full suite of Office 2010 productivity apps - Word, Excel, and PowerPoint. The fact that they're available for free is downright shocking to me, knowing Microsoft.

There are other apps too, but none as important as the three above.

Now, I'm not sure I'd ever use OnLive Desktop, seeing all of its limitations. I almost always have my laptop, and there are countless Office replacement apps for my tablet, plus I can always VNC into my home PC. But then again, I'm not a typical user. By far.

All you need is an active Internet connection and an Android tablet, and you've gotten a seamless desktop experience. Presentations have sound and animations, videos stream, music plays right out of the speakers. In some ways, you now have some of the best Office experience on your tablet everywhere where there is Internet. That's also the downside - if Internet drops, so does your session. Everything always goes wrong, and I'm not going to trust the Internet gods with an important presentation - instead, I'll put it on my local drive, backed up to Dropbox, and use a laptop. But that's just me - you may just be the perfect target audience.

Remember, this is just the beginning - in the future, we'll be highly connected, all the time, everywhere we go. The future is completely in the cloud, and OnLive Desktop is a great start. These guys revolutionized gaming, and now they're revolutionizing the cloud in front of our very eyes.

Sure, it's Windows. Sure, it's pretty limited. But hey - it's free, it's running entirely in the cloud, and it's damn cool. Go try it out for yourself.

I'd like to get this out of the way right now: the app is available for download from the Market only in the United States. However, that doesn't mean you can't try it out anyway. Since I'm in Spain right now, I pulled out the APK using APK Downloader, installed it on my Transformer Prime, and was in the cloud in less than a minute.

So, check the Market, and if you can't download it due to geo-restrictions, here, you can have it (it's a free download, you won't find any piracy here):

HTC Says Sense Got Too Bloated (And So Did Their Product Line), But They're Going Back To Simple