Verizon customers will want to keep an eye on their inboxes today, as big red has begun sending emails to select customers offering a free upgrade to Samsung's Galaxy Nexus, Stratosphere, or Motorola's Droid RAZR with a new 2-year agreement.

The email is presumably being sent out to those customers who have a 3G-only plan, or who haven't made the jump to a smartphone yet, judging by the following snippet of text, though it's hard to be certain exactly who qualifies for the deal.

“There’s never been a better time to move to 4G LTE – Upgrade to your FREE 4G LTE smartphone today!”

The Next Web rightly notes that while the offer may seem bold for offering customers discounts between $99 and $299, it is likely that promoting 4G data plans will pull in enough cash to make the deal worthwhile. 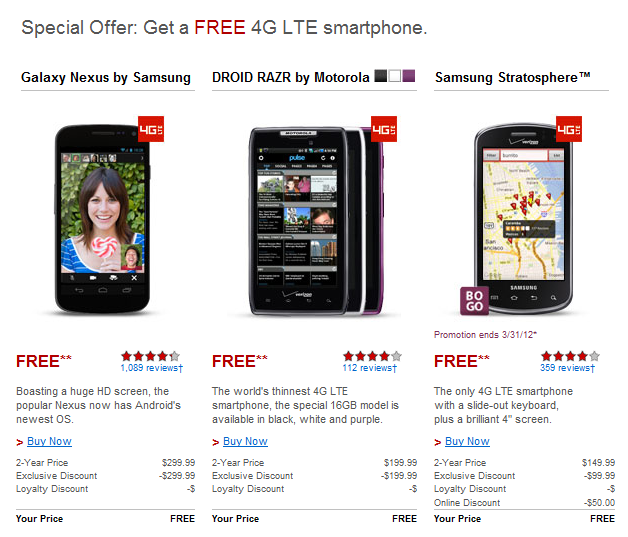 If you think a free Galaxy Nexus, Droid RAZR, or Samsung Stratosphere is something you might enjoy (who wouldn't?), keep checking your email, or make a call to Verizon to see if you qualify.

Via The Next Web Google Teases MWC Attendees With Bowl Of Jellybeans, Coyly Asks, "Oh, Is That Not What You ...